And this is what we pay them to put themselves in mortal danger. 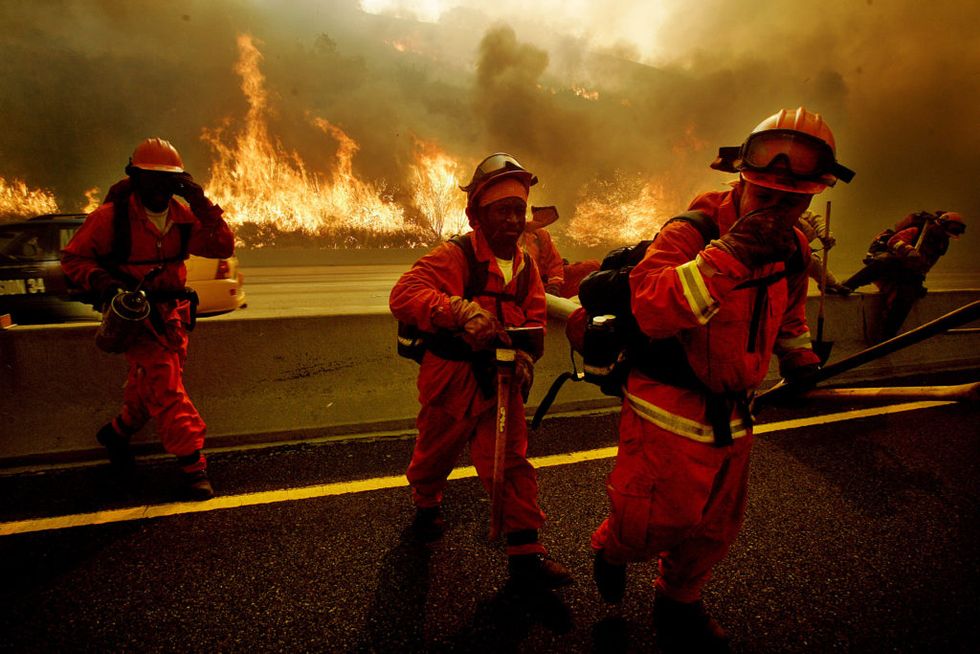 DIAMOND BAR, CA-NOV.16: Inmate work crews from the California Correctional Facility battle a blaze November 16, 2008 in Diamond Bar, California. Several fires have grown together in this area to create what is now called the Triangle Complex Fire. Over 40,000 people have been evacuated in the path of the fire which has damaged or destroyed more than 160 homes so far. Strong Santa Ana Winds are fueling major wildfires in five southern California counties that have destroyed hundreds of homes and charred thousands prompting California Governor Arnold Schwarzenegger to declare multiple states of emergency. (Photo by Sandy Huffaker/Getty Images)

As seems to be the case with each passing year, California is facing wildfires of unprecedented number and severity — while many are still burning across the state, the Mendocino Complex fire alone is now the largest fire in California history, charring hundreds of thousands of acres and resulting in at least one firefighter fatality.

With the need for firefighter labor greater than ever, the Golden State has been relying heavily on trained inmates — both men and women — paying them just $2 a day, with a $1-per-hour bonus while actively fighting a blaze. Though this saves California about $80 million a year in labor costs, the utilization of prisoners for such high-risk work remains highly controversial.

So much so, incarcerated prisoner-rights advocates announced Aug. 21 that they’re calling for a 19-day nationwide prison-labor strike, where prisoner-workers, including firefighters, will cease working to protest exploitative labor practices and poor prison conditions. No word yet on how or whether the strike will impact California’s wildfires, but many are predicting it could be one of the largest strikes in U.S. history.

‘‘Any fire you go on statewide, whether it be small or large, the inmate hand crews make up anywhere from 50 to 80 percent of the total fire personnel,’’ Lt. Keith Radey, a commander in charge of a camp where women firefighter inmates train, toldThe New York Times.

Inmates with no history of arson, gang crimes, escape attempts, sexual crimes, kidnapping or escape are allowed to volunteer for firefighting programs. They then receive two to three weeks of training, in contrast to the civilian firefighters, who undergo a three-month apprenticeship and can earn up to $74,000 a year, plus benefits.

“Look, the biggest, most important thing is putting out the fires,” Lisa Graybill, deputy legal director at Southern Poverty Law Center, toldNewsweek. “And in my experience, prisoners are so eager for the chance to work and chance to demonstrate their rehabilitation that they’ll accept any work conditions. But they shouldn’t be exploited by the state. They’re putting their lives on the line like other California firefighters, and they should be paid fairly for a fair day's work.”

Further, unlike other prison-work programs across the U.S., prisoners will likely not be able to apply their firefighting skills and experience once they’re released. According to Graybill, firefighters in California are required to become licensed emergency medical technicians, and being a convicted felon precludes one from obtaining a license. Also, it bears mentioning that the families of inmates who die in the line of duty don’t receive the same benefits as those of non-inmate firefighters.

“Many people who are incarcerated have families on the outside who are relying on them to come home and be their breadwinner again. If anything does happen to them, will there be provision for their families and will they be taken care of in any way?” Graybill said in a Newsweek interview.

Still, the fact remains that inmates continue to volunteer for the work, and many don’t feel exploited. As The New York Times pointed out, the environment of an outdoor camp is often far preferable to being inside prison walls, with civilian food, vegetable gardens, hiking and even yoga classes, and many prisoners are grateful for a redemption opportunity.

“In an active fire, Cal Fire makes the determination for all crews based on the conditions, and the safety and security of all firefighters. In other words, inmate firefighters are not treated differently in the work they perform at the camps,” Vicky Waters, press secretary for the California Department of Corrections and Rehabilitation, toldNewsweek.“I just want to emphasize that we absolutely recognize the incredible job these firefighters are doing, particularly when lives and properties are at stake.”