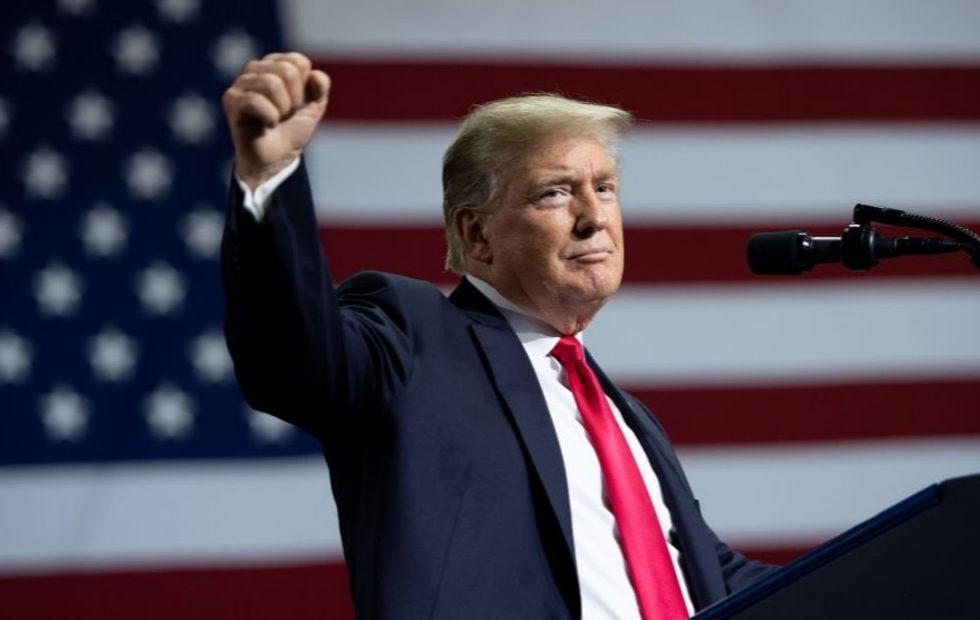 US President Donald Trump speaks during a campaign rally at the Florida State Fairgrounds Expo Hall in Tampa, Florida, on July 31, 2018. (Photo by SAUL LOEB/AFP/Getty Images)

The Carr Fire as well as other wildfires burning throughout California have taken the lives of two firefighters, killed five civilians, burned over 1,000 homes and forced thousands to evacuate. Until this weekend, President Donald Trump remained silent on the tragedy unfolding on the west coast.

Sunday evening, Trump posted his first tweet about the wildfires. Instead of encouraging words for the people displaced, the families of those who died or the fire service fighting the fires, the President took the opportunity to attack California environmental laws. The since deleted, then reposted tweet stated:

California wildfires are being magnified & made so much worse by the bad environmental laws which aren’t allowing massive amount of readily available water to be properly utilized. It is being diverted into the Pacific Ocean. Must also tree clear to stop fire spreading!"

The revised version, posted Monday evening, remains largely the same except an "s" added to the word "amount" and the word "from" was added.

California wildfires are being magnified & made so much worse by the bad environmental laws which aren’t allowing m… https://t.co/V94EEYqoHv
— Donald J. Trump (@Donald J. Trump) 1533592422.0

Trump followed up his Sunday tweet with one Monday morning. This one targeted California Governor Jerry Brown specifically. And made less sense than the first one to outside observers.

But the one group not addressed in Trump's Twitter posts, the California Fire Service, refuted the President's claims.

So what is Trump talking about and why?

For those unfamiliar with the internal politics of California, Trump refers to an ongoing battle between farmers and timber operations versus those who make their money off the environmental tourism trade as well as those who just want to protect natural resources.

As one Twitter user aptly summed up in their sarcastic response—joking that the "deep state" and California Democratic Representative Nancy Pelosi keep farmers from getting the water they want while hinting their contribution to the overall California economy fails to warrant it.

Farmers want to divert more water out of the rivers rafters and kayakers use and timber operations want to clear cut the trees in areas popular among campers and hikers. But tourism pulls in over $120 billion dollars annually while agriculture brings only an estimated third of that total.

There is no love lost between Trump and Governor Brown. The President has attacked Brown and the state he leads several times on Twitter. Meanwhile, Brown posted only these messages on Twitter over the last several days.

Our thoughts are with the loved ones of the 2 firefighters we lost fighting the #CarrFire & with the many Californi… https://t.co/8YCbFraaB6
— Jerry Brown (@Jerry Brown) 1532709575.0

Grateful for all of the firefighters and emergency responders. You make California proud. https://t.co/DcKmBYeBSS
— Jerry Brown (@Jerry Brown) 1533487260.0

Brown's one (re)tweet that mentioned the President only announced a request for federal aid.

However when asked about the impact of climate change on the fires during a press conference last week, Brown stated the "predictions that I see, the more serious predictions of warming and fires to occur later in the century, 2040 or 2050, they're now occurring in real time."

You can expect that—unfortunately—to continue intensifying in California and throughout the Southwest."

People on Twitter shared reactions to Trump's tweets regarding the fires as the following tweets show.

Some took the President to task for his timing and choice of message.

Why doesn’t @realDonaldTrump come look the firefighters and victims in the eye when he makes up this nonsense about… https://t.co/mFZAIsHcDA
— Clara Jeffery (@Clara Jeffery) 1533582976.0

But some point to a Washington connection for the Trump tweets, and not with Pelosi. Instead people cited California Republican Representative and vocal Trump supporter Devin Nunes.

And of course the nature, scope, and duration of behind-the-scenes communication between Trump and Nunes is interes… https://t.co/BfLWKrIw93
— southpaw (@southpaw) 1533588046.0

For updates on their efforts on all the wildfires they are currently fighting, you can follow them on Twitter @CAL_FIRE.