Republican Congressman Just Tried to Mansplain Equal Pay Legislation to His Female Colleague Who Is Sponsoring It, and It Did Not End Well For Him 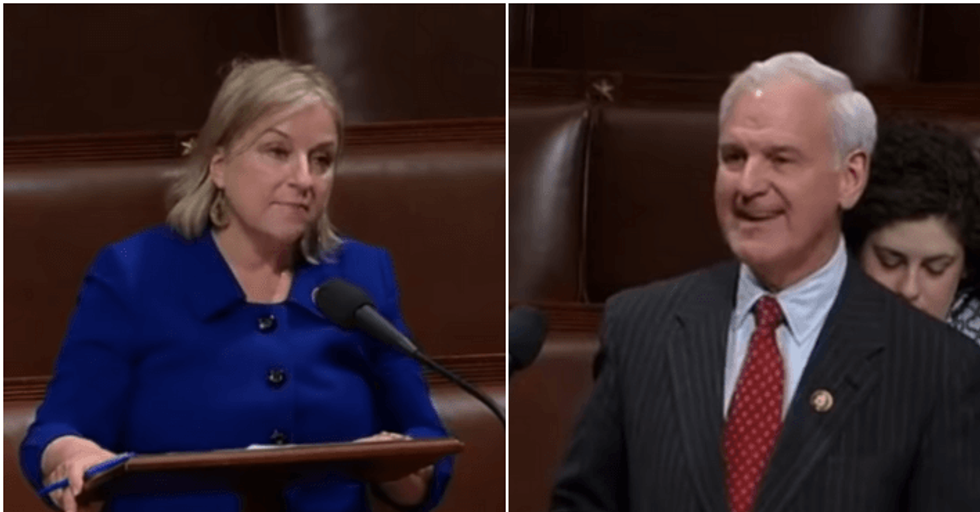 A bill to address gender inequality in pay, called the Paycheck Fairness Act, was being debated Wednesday in the House of Representatives. Republican Representative Bradley Byrne of Alabama proposed an amendment for the bill.

Democratic Representative Susan Wild opposed the amendment and defended the bill in its original form.

"Mr. Chairman, I have great respect for the lady. I don’t think [Wild] understands what that language actually means and how it’s been interpreted by the courts and how it may be totally misinterpreted against plaintiffs in these types of lawsuits."

"I do think that she misunderstands both the amendment and the underlying bill."

There is only one problem with Byrne's assertion: Wild is one of the co-sponsors who wrote the bill and presented it to both committee and the full House.

You can watch the full exchange here.

"As a practicing attorney for over 30 years, I can tell you this was not the first time someone has attempted to avoid an argument over the merits of the law using condescension and dismissal."

Wild characterized Byrne's amendment as a "clear attempt" to undermine the Paycheck Fairness Act. The bill will move toward stopping employers from paying women less than men for the same job.

People called out Byrne for his treatment of Wild on the House floor.

The response was decidedly not in Byrne's favor.

@CAPAction @RepByrne @RepSusanWild "I don't think the lady understands what the language means." Really. We all u… https://t.co/CDMJY94BzM
— Marsha Sherman (@Marsha Sherman) 1553733004.0

@CAPAction @RepByrne @RepSusanWild Even worse, they question whether the gender pay gap is even a thing!
— Colin Seeberger (@Colin Seeberger) 1553718575.0

In 2017, women as a whole earned 80% of what their male coworkers earned. Those numbers got worse for women of color. Hispanic women earn just 53% of what White male counterparts earn.

Representative Wild hopes to address these issues with her legislation.