Burger King Just Savagely Trolled Donald Trump After He Misspelled 'Hamburgers' In a Morning Tweet, and People Are So Here For It 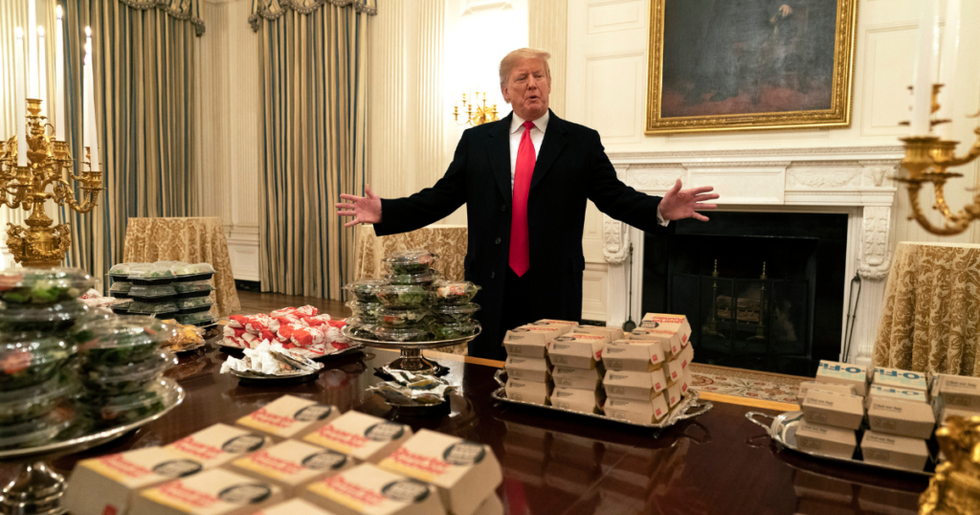 WASHINGTON, DC - JANUARY 14: (AFP OUT) U.S President Donald Trump presents fast food to be served to the Clemson Tigers football team to celebrate their Championship at the White House on January 14, 2019 in Washington, DC. (Photo by Chris Kleponis-Pool/Getty Images)

President Donald Trump hosted the Clemson Tigers at the White House Monday night to congratulate them on becoming NCAA champions, and the whole event was maximum Trump.

Because of the government shutdown, White House chefs have been furloughed, so Trump treated the college athletes to a spread of fast food from a variety of popular restaurants.

"I thought this was a joke," one athlete said as he approached the buffet, which had been sitting out for several hours.

On Tuesday morning, Trump jumped on Twitter to humblebrag about the meal he personally paid for and, as only Trump can, screwed it up.

The original tweet, which has since been deleted, is as follows:

"Great being with the National Champion Clemson Tigers last night at the White House. Because of the Shutdown I served them massive amounts of Fast Food (I paid), over 1000 hamberders etc. Within one hour, it was all gone. Great guys and big eaters!"

Great being with the National Champion Clemson Tigers last night at the White House. Because of the Shutdown I serv… https://t.co/bsowttBjnr
— Donald J. Trump (@Donald J. Trump) 1547568691.0

"Due to a large order placed yesterday, we're all out of hamberders," wrote the fast food giant. "Just serving hamburgers today."

due to a large order placed yesterday, we're all out of hamberders. just serving hamburgers today.
— Burger King (@Burger King) 1547570007.0

@realDonaldTrump What just happened at the White House was like a scene out of @VeepHBO. So I gave it the "closing… https://t.co/0ghEbRxJvB
— Arlen Parsa (@Arlen Parsa) 1547569230.0

Many on Twitter had a question for Berder King...

Who is their Twitter person? They deserve a raise.

@BurgerKing According to the rules of the internet, the Burger King social media manager is now the new President of the United States.
— Daniel Kelly (@Daniel Kelly) 1547571821.0

People also tore into Trump for not ponying up for healthier food.