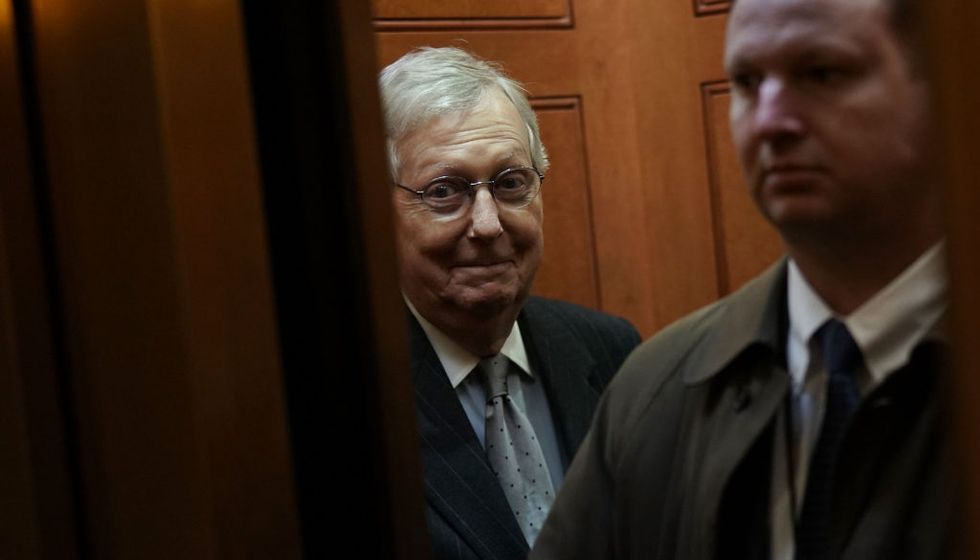 U.S. Senate Majority Leader Sen. Mitch McConnell (R-KY) returns to the U.S. Capitol from a meeting at the White House January 9, 2019 in Washington, DC. President Trump walked out of a meeting with congressional leaders at the White House negotiating border security funding and government shutdown, calling it "a total waste of time." (Photo by Alex Wong/Getty Images)

In an October 2018 essay for the New York Review of Books, historian Christopher Browning, Professor of History Emeritus at the University of North Carolina at Chapel Hill and an expert on the rise of the Nazis and the Holocaust, answered the question many people around the world have found themselves asking since 2016.

Are there similarities between the political landscape of President Donald Trump's United States and Adolph Hitler's Germany?

Browning began his essay titled "The Suffocation of Democracy" stating:

"As a historian specializing in the Holocaust, Nazi Germany, and Europe in the era of the world wars, I have been repeatedly asked about the degree to which the current situation in the United States resembles the interwar period and the rise of fascism in Europe. I would note several troubling similarities and one important but equally troubling difference."

Browning went on to outline the policies implemented in the United States that were similar to those that helped Hitler gain power in Europe:

But one section of Browning's essay particularly resonated with people. After describing how a weakened German government allowed Hitler to rise to power, Browning called out the one person who could be viewed acting similarly in the United States.

In regard to Republican Senate Majority Leader Mitch McConnell of Kentucky, he wrote:

"If the US has someone whom historians will look back on as the gravedigger of American democracy, it is Mitch McConnell."

"He stoked the hyperpolarization of American politics to make the Obama presidency as dysfunctional and paralyzed as he possibly could. As with parliamentary gridlock in [Germany], congressional gridlock in the US has diminished respect for democratic norms, allowing McConnell to trample them even more."

"Nowhere is this vicious circle clearer than in the obliteration of traditional precedents concerning judicial appointments."

The historian and expert went on to list the ways McConnell openly and brazenly altered the methods of judicial appointments to create a stockpile of vacancies in the hopes of installing a Republican president to fill them all, including "McConnell’s unprecedented blocking of the Merrick Garland nomination required him, in turn, to scrap the filibuster for Supreme Court nominations in order to complete the 'steal' of Antonin Scalia’s seat and confirm Neil Gorsuch."

People latched on to the moniker of "gravedigger of American democracy" for Senator McConnell, especially now that he refuses to allow bills to reopen the government—based on his own legislation previously approved by the Senate during the 115th Congress—to even be considered by the 116th Congress.

McConnell's wife, Elaine Chao, is a member of the Trump administration, serving as the Secretary of Transportation. That the Department of Transportation is one of the agencies affected by the partial shutdown did not escape notice.

People remarked on the Trump—Chao—McConnell connection.

Many shared the new nickname for McConnell on social media.

“If the US has someone whom historians will look back on as the gravedigger of American democracy, it is… https://t.co/besL5oA1Nc
— Bette Midler (@Bette Midler) 1547518262.0

Like Hitler’s conservative allies, McConnell and the Republicans have prided themselves on the early returns on the… https://t.co/FqxmnTWtm2
— Cheri Jacobus (@Cheri Jacobus) 1547662562.0

@AlecMacGillis I wonder how Kentucky feels about electing and re-electing "The Gravedigger of American democracy"?… https://t.co/JrmPgExgaC
— Erik Lundegaard (@Erik Lundegaard) 1547506929.0

@JaneMayerNYer And now I solemnly suggest that @senatemajldr be forever known as: “The Gravedigger of Democracy”
— Rick Powers (@Rick Powers) 1547520412.0

Nine departments were shut down by President Trump in cooperation with GOP leadership who had from October 1, 2017 to January 2019 to pass funding in a Republican-controlled Congress. Those departments are:

Professor Emeritus Browning is the author of nine books, including Ordinary Men: Reserve Police Battalion 101 and the Final Solution in Poland, the account of how ordinary middle-aged German men of working class backgrounds became the cold-blooded murderers of tens of thousands of Jews.