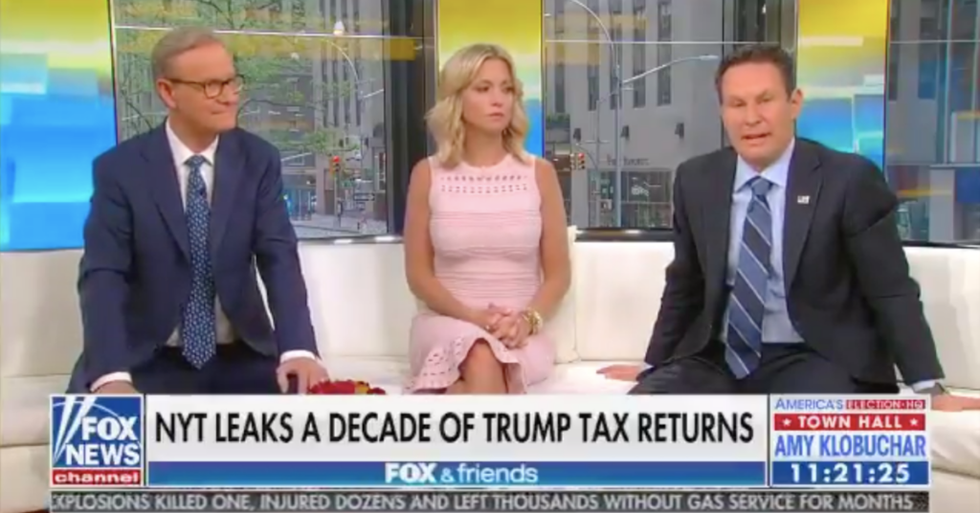 "Fox and Friends" host Brian Kilmeade had nothing but praise for President Donald Trump after a New York Times investigation produced records revealing Trump lost $1.17 billion dollars over a ten-year period. That's so much money, in fact, that Trump was able to avoid paying income taxes for eight of the 10 years.

“He lost a lot of money over the course of 10 years, if you consider a billion dollars a lot of money," Kilmeade said before referring to Trump as a "bold" businessman, adding:

“It’s as if you buy something and it doesn’t pay out right away or ever you’re a loser. No, you take shots, you have an opportunity to do things, that’s the way you live. The reason why we all knew Donald Trump’s name is because for 30 years that’s what he did... What do people not understand about he’s a little bit different from most people?”

Kilmeade's co-host, Ainsley Earhardt, also offered a spirited defense of the president, saying that voters won't care about Trump losing so much money because "he was campaigning on the trail with his plane behind him that's as big as a Delta jet, with his name on it."

“If anything, you read this and you’re like ‘Wow, it’s pretty impressive, all the things that he’s done in his life,’" she said. "It’s beyond what most of us could ever achieve.”

People aren't buying the logic coming out of "Fox and Friends" this morning.

@revrrlewis By that logic, his dad was insane then for making money during the same period of time and reporting p… https://t.co/OXFPexESFO
— Chacmool (@Chacmool) 1557316779.0

Although The New York Times did not obtain Trump's actual tax returns, it received the information contained in the returns from "someone who had legal access to it." As the publication notes:

"The Times was then able to find matching results in the I.R.S. information on top earners — a publicly available database that each year comprises a one-third sampling of those taxpayers, with identifying details removed. It also confirmed significant findings using other public documents, along with confidential Trump family tax and financial records from the newspaper’s 2018 investigation into the origin of the president’s wealth."

The investigation found that Trump was in "deep financial distress" by the time his book The Art of the Deal hit bookstores in 1987. By 1990 and 1991, he reported losses of more than $250 million, more than any other high-income individual taxpayer. That continued through the years, the Times noted, writing that Trump appeared to lose “more money than nearly any other individual American taxpayer."

Trump himself responded to the Times story saying that he intended to suffer more than $1 billion losses, writing that those losses created a "tax shelter."

"You always wanted to show losses for tax purposes....almost all real estate developers did - and often re-negotiate with banks, it was sport," he argued before calling the story "a highly inaccurate Fake News hit job!"

Charles J. Harder, a lawyer for Trump, told the Times that the tax information the newspaper acquired was "demonstrably false." He added that the Times' statements "about the President's tax returns and business from 30 years ago are highly inaccurate," though he did not cite any specific errors with the newspaper's reporting.

In his own defense of the president, former House Speaker Newt Gingrich, appearing on "Fox and Friends," said that the president's losses show he was right to push for tax reform that cut taxes significantly for the wealthy.