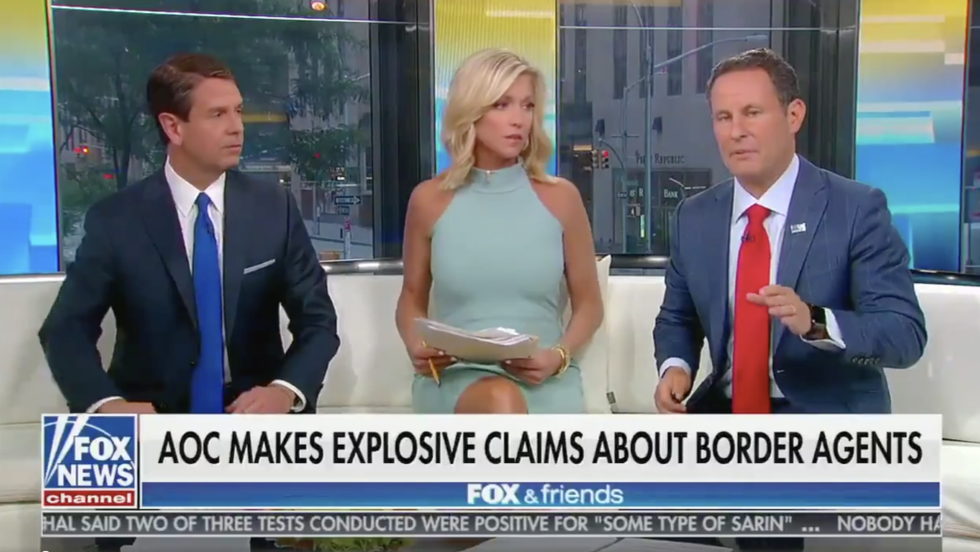 Members of congress who toured migrant detention centers in Texas on Monday recounted the squalid conditions that undocumented migrants in the overcrowded facilities are living in. Multiple representatives said that migrants were told to drink from the toilet, were going days without showers, and living with 15 people in one cell.

Yet Fox and Friends host Brian Kilmeade likened the situation simply to an overcrowded house party.

He went on to compare the facilities to an overcrowded hotel, asserting that conditions would be unsatisfactory in any facility so overcrowded.

Brian Kilmeade unfortunately cannot picture the situation at the border unless he first puts it in terms of hotels… https://t.co/zgv7azDIiW
— Courtney Hagle (@Courtney Hagle) 1562072024.0

People quickly pointed out why these analogies don't hold up—including Congresswoman Alexandria Ocasio-Cortez, who recently toured one of the facilities.

@CourtneyHagle @kilmeade when was the last time you threw a house party and locked everyone in cages, refused basi… https://t.co/pTAUtU1THp
— Cathy Blinn (@Cathy Blinn) 1562075968.0

Members of Congress who actually toured the concentration camps, made it clear they were anything but a party.

This moment captures what it’s like for women in CBP custody to share a cramped cell—some held for 50 days—for them… https://t.co/NMWx0BdIw8
— Joaquin Castro (@Joaquin Castro) 1562025413.0

Awareness of the facilities' conditions is steadily growing, as is the outrage.