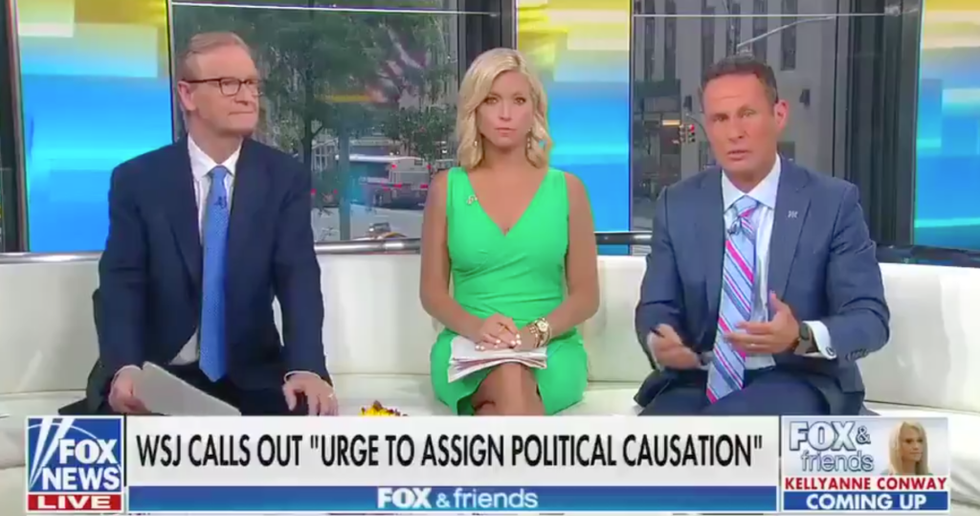 After a shooter who killed 22 people in an El Paso, Texas shopping center described his massacre as a response to the "Hispanic invasion of Texas," Americans noted that President Donald Trump frequently used the term "invasion" to describe Latinx immigrants.

The ideological parallels between the shooter's manifesto and Trump's anti-immigration talking points are chilling.

How much does the Texas shooter's manifesto echo the rhetoric of @realdonaldtrump? Watch below to find out. And for… https://t.co/qDnDxw7ueS
— The Recount (@The Recount) 1565053459.0

That didn't stop Fox & Friends host Brian Kilmeade from defending Trump and his use of the term "invasion," to describe immigrants crossing the southern border.

"When you have over 110,000 people coming a month, over a million last year and well over a million this year. If you use the term 'invasion,' it's not anti-Hispanic, it's a fact."

People knew exactly what the term is meant to imply.

@MattGertz @LogjamminPete Invasion is an act of war. It implied that guns must be used to counter the "invaders".
— Sergey Kofanov (@Sergey Kofanov) 1565098700.0

People were pretty sure they knew what "invasion" is supposed to imply.

@MattGertz If Fox&friends uses the term invasion it is triggering fear and hate in some of their viewers. They do i… https://t.co/BZfIjfThaV
— Minimuh (@Minimuh) 1565094863.0

@MattGertz I see we are upping the racist rhetoric in an attempt to normalize it within conversation
— Bren (@Bren) 1565093992.0

Fox is famously Donald Trump's favorite news network, so it doesn't come as a surprise that the network is defending a term Trump's administration and campaign has worked tirelessly to normalize the term.

Since May of last year, Trump's 2020 campaign has run approximately 2200 ads using the word "invasion."

It's unclear whether the president or his campaign will soften the violent rhetoric against immigrants or if, as happens often, Trump will double down.

Whatever happens, Fox is likely to follow his lead.