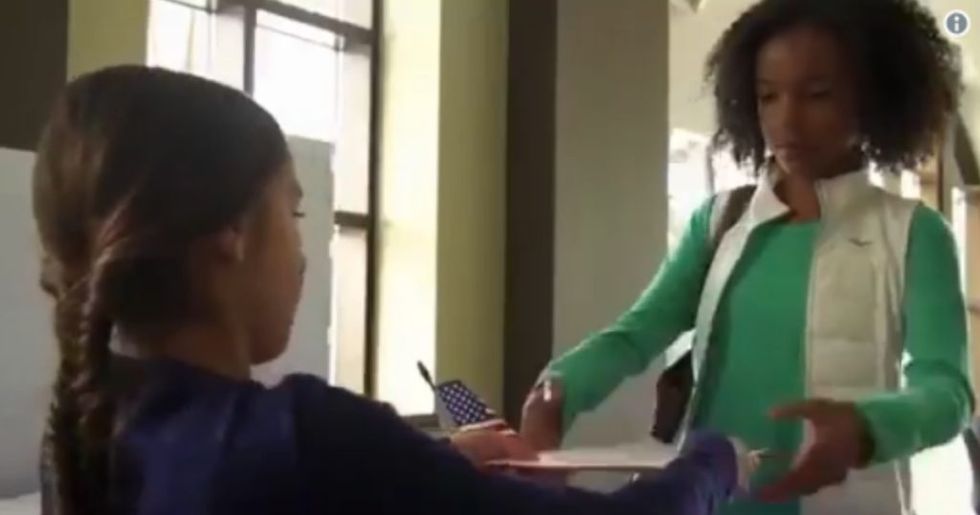 Georgia's Secretary of State and Republican gubernatorial candidate Brian Kemp is getting hammered on social media after a video posted to his official Secretary of State website showing a young black girl being denied the chance to vote was shared widely on Thursday.

The video, which was taken down after Newsweek reported on it, features kids entering a polling station and going through the voting process to demonstrate how early voting in Georgia works.

First a white boy votes without a problem, but then when a young African American girl goes to vote, she can't since she doesn't have the proper identification. The video explains that without an ID, voters can cast a provisional ballot that will only be counted if the voter returns within three days with a photo ID. If they don't, the ballot will be rejected.

Social media blasted Kemp for having produced such a tone-deaf video, considering the pervasive disenfranchisement of minorities.

He was also accused of outright racism.

This video says everything about #racist @BrianKempGA - the black girl is denied a ballot because she lacks ID, but… https://t.co/CRFdSqZpZR
— Pankaj Ramani (@Pankaj Ramani) 1539882545.0

Kemp is locked in a tight race against Democrat Stacey Abrams, who if elected would become the country's first black female governor.

The ad is the latest example of voter suppression efforts being employed by Kemp's campaign and Georgia Republicans.

"We have known since 2016 that the exact match system has a disproportionate effect on people of color and on women," Abrams said Sunday on CNN's State of the Union.

“It's part of a pattern of behavior where [Kemp] tries to tilt the playing field in his favor or in the favor of his party," she told Meet the Press later that day.

Unfortunately for Georgia residents, Kemp is not only a candidate for the state's highest office - he's also in charge of the election, which has prompted calls for his resignation from Abrams campaign.

Under Kemp's direction, more than 53,000 Georgians, 70 percent of whom are black, have had their voter registrations placed on hold thanks to strict but arbitrary rules. Voter information, for example, must exactly match Social Security or driving records.

This "exact match" system marks any error -  inconsistent hyphens, misspellings, shortened nicknames or typos - as grounds for putting a voter's registration on hold.

Abrams is concerned that the prospect of being denied the right to vote may dissuade people from showing up.

“They get a confusing letter saying there’s something wrong with their registration,” she said on Sunday. “And more than likely they will sit out this election. The miasma of fear that is created through voter suppression is as much about terrifying people about trying to vote as it is about actually blocking their ability to do so.”

Kemp has referred to those critical of the rules and calling for his resignation as "left-wing radicals."

"While outside agitators disparage this office and falsely attack us, we have kept our head down and remained focused on ensuring secure, accessible, and fair elections for all voters," Kemp's campaign said in a statement. "The fact is that it has never been easier to register to vote and get engaged in the electoral process in Georgia.”

All 53,000 people will be able to vote with provisional ballots or if they show up with proper ID that matches their registration, however, many people may find they were purged from the rolls when they show up on Election Day. And if their ID doesn't match their voter information, it will be too late.