Republican Secretary of State Was Just Caught on Tape Expressing His Concern That Voters Actually Turn Out to Vote, and People Are Crying Foul 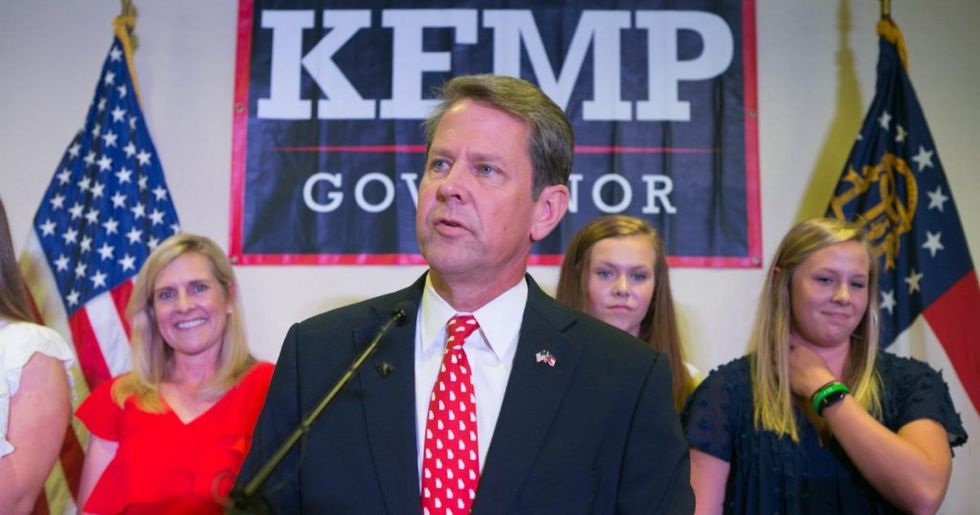 Georgia Secretary of State Brian Kemp is terrified of Americans who exercise their right to vote, according to an audio tape obtained by Rolling Stone.

Kemp, a Republican, is locked in a tight race for Georgia's governorship against Democrat Stacey Abrams. As secretary of state, he isn't just a candidate; he's overseeing his state's election process.

Kemp lamented "the literally tens of millions of dollars that they [the Abrams camp] are putting behind the get-out-the-vote effort to their base," and that Abrams may have an edge because of absentee ballots.

“They have just an unprecedented number of that,” said Kemp, “Which is something that continues to concern us, especially if everybody uses and exercises their right to vote – which they absolutely can – and mail those ballots in, we gotta have heavy turnout to offset that.”

Listen to the full recording below. Rolling Stone was able to confirm the source's attendance at Kemp's campaign fundraiser through donation records.

Kemp's glaring conflict of interest has a lot of people concerned over how fair Georgia's election really is.

So anybody doubt anymore what Brian Kemp is trying to do? He said it himself!!!! This is the GOP plan—stop non whit… https://t.co/QTQIWjkrbv
— Richard Yeselson (@Richard Yeselson) 1540323056.0

@JamilSmith @RollingStone @BrianKempGA @staceyabrams It is not my policies that are wrong, but these pesky voters.… https://t.co/gT1WCrP1n7
— Rino Sanchez (@Rino Sanchez) 1540322481.0

@tedlieu Brian Kemp is concerned that so many people are exercising their right to vote.
— Coltrane Decker (@Coltrane Decker) 1540322368.0

If the Kemp recording is legit, it certainly doesn't help his argument that there's nothing anti-democratic in his… https://t.co/7vmzjOW7QD
— Tim Rostan. (@Tim Rostan.) 1540322362.0

In case you're still wondering what all the fuss about voter purges and revoked registration is all about - the GOP… https://t.co/WgUtCRjesu
— აoიt (@აoიt) 1540322362.0

@JamilSmith @RollingStone @BrianKempGA @staceyabrams Hey @BrianKempGA maybe you should be willing to win or lose fair and square.
— souven (@souven) 1540322349.0

Winning or losing fair and square is at the heart of the that has become Georgia's election.

Kemp has enacted some of the toughest voter registration and identification laws in the country.

Under Kemp’s direction, more than 53,000 Georgians, 70 percent of whom are black, have had their voter registrations placed on hold thanks to strict but arbitrary rules. Voter information, for example, must exactly match Social Security or driving records.

This “exact match” system marks any error –  inconsistent hyphens, misspellings, shortened nicknames or typos – as grounds for putting a voter’s registration on hold.

This has caused black voters in Georgia to worry about being disenfranchised.

The public, on the other hand, sees Kemp's efforts as racially-based.

@BrianKempGA Why do you need to suppress the Africa American vote? That’s cheating to win. It’s also racist. @BrianKempGA is a racist.
— Alt-Populist (@Alt-Populist) 1540314858.0

Kemp has referred to those critical of the rules and calling for his resignation as “left-wing radicals.”

“While outside agitators disparage this office and falsely attack us, we have kept our head down and remained focused on ensuring secure, accessible, and fair elections for all voters,” Kemp’s campaign said in a statement. “The fact is that it has never been easier to register to vote and get engaged in the electoral process in Georgia.”