Brett Kavanaugh Just Sent a Defiant Letter to the Senate Judiciary Committee, and It Sounds Just Like the White House Wrote It 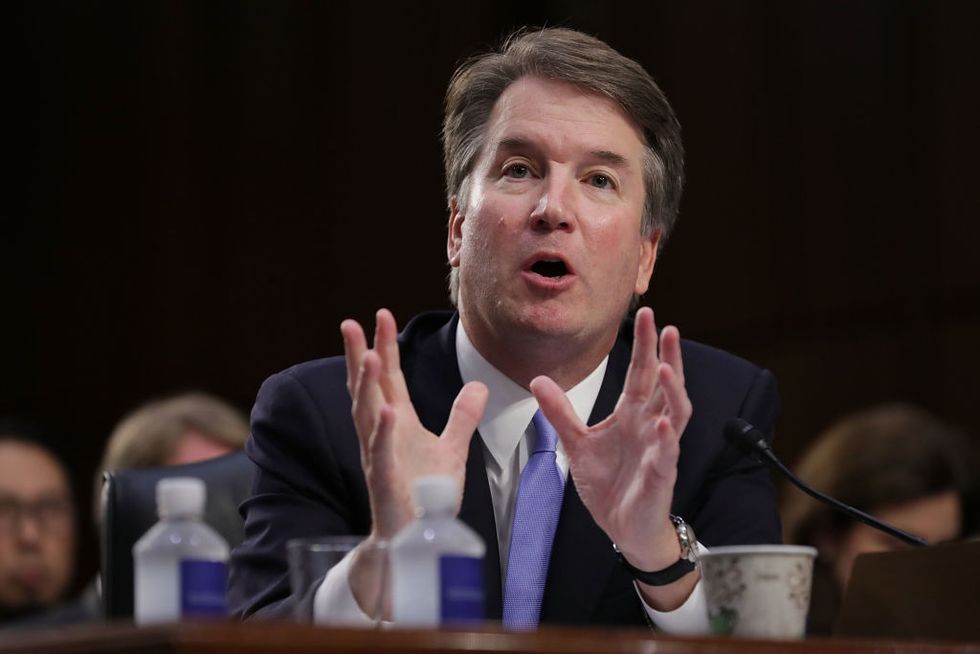 In a letter addressed to Senators Chuck Grassley (R-IA) and Dianne Feinstein (D-CA), the chairman and the ranking member of the Senate Judiciary Committee, Supreme Court nominee Brett Kavanaugh insisted, once again, that allegations that he sexually assaulted women while in high school and college are false. He did not, despite the scandal, offer to formally withdraw his nomination.

"I will not be intimidated into withdrawing from this process. The coordinated effort to destroy my good name will not drive me out," the embattled nominee wrote.

Brett Kavanaugh sends new letter to the Judiciary Committee, via @Arianedevogue: “I will not be intimidated into wi… https://t.co/J58vlMA3KG
— Phil Mattingly (@Phil Mattingly) 1537810681.0

Only after the "exhaustive process" of providing testimony before the Senate was complete did a 36-year-old allegation from Dr. Christine Blasey Ford surface, Kavanaugh said, adding that it "had been asserted months earlier and withheld from me throughout the hearing process":

"First it was an anonymous allegation that I categorically and unequivocally denied. Soon after the accuser [Dr. Ford] was identified, I repeated my denial on the record and made clear that I wished to appear before the Committee. I then repeated my denial to Committee investigators––under criminal penalties for false statements...

Last night, another false and uncorroborated accusation from 35 years ago was published... There is now a frenzy to come up with something––anything––that will block this process and a vote on my confirmation from occurring."

Continuing, Kavanaugh claimed he is the victim of a smear campaign and possible conspiracy:

"These are smears, pure and simple. And they debase our public discourse. But they are also a threat to any man or woman who wishes to serve our country. Such grotesque and obvious character assassination––if allowed to succeed––will dissuade competent and good people from all political persuasions from service."

White House counselor Kellyanne Conway doubled down on the president's claim, suggesting that Kavanaugh is indeed the target of a conspiracy from left-wing politicians and their supporters.

"He's now calling this a smear campaign," she said on "CBS This Morning." "Indeed, it's starting to feel like a vast left-wing conspiracy."

And White House spokesperson Kerri Kupec said in a statement that the White House would continue to stand by Kavanaugh:

"This 35-year-old, uncorroborated claim is the latest in a coordinated smear campaign by the Democrats designed to tear down a good man. This claim is denied by all who were said to be present and is wholly inconsistent with what many women and men who knew Judge Kavanaugh at the time in college say. The White House stands firmly behind Judge Kavanaugh."

"Senate Democrats and their allies are trying to destroy a man's personal and professional life on the basis of decades old allegations that are unsubstantiated and uncorroborated," he said.

Conservative commentator Candace Owens said the same, characterizing opposition to Kavanaugh as "part of the left's efforts to stop this administration."

Protests against Kavanaugh's nomination continue, however, and there were several arrests today as demonstrators shouting "We believe the women!" overwhelmed the Russell rotunda in the Senate building.

LIVE: Video of protesters getting arrested, after taking over the Russell rotunda in the Senate building to protest… https://t.co/WtCyGhNDwD
— Scott Dworkin (@Scott Dworkin) 1537808569.0

Calls for Kavanaugh to withdraw his nomination have intensified, as have demands that the Republican Party stop defending him.

If Merrick Garland were the nominee, and he was credibly accused of sexually assaulting multiple women, I’d be agai… https://t.co/fjqo5rffOR
— Scott Dworkin (@Scott Dworkin) 1537815413.0

Conservatives: OMG WE HAVE TO STOP TRANS PEOPLE BECAUSE THEY SNEAK INTO DRESSING ROOMS AND MOLEST OUR DAUGHTERS AND… https://t.co/65DEixBCnw
— Stonekettle (@Stonekettle) 1537798117.0

In response to a new allegation of sexual misconduct from Deborah Ramirez, a former classmate of Kavanaugh's who said he exposed himself to her at a fraternity party at Yale University, Senate Republicans are committing to moving forward with Kavanaugh's confirmation.

"It's time to vote this week," Cotton said.

Graham, himself a senior member of the Judiciary Committee, called the allegations "wholesale character assassination" and urged Republicans to move forward with the confirmation process.

"What am I supposed to do, go ahead and ruin this guy's life based on an accusation?" Graham said on "Fox News Sunday." He added, "I'm just being honest. Unless there's something more, no, I'm not going to ruin Judge Kavanaugh's life over this. But she should come forward. She should have her say. She will be respectfully treated."

Graham also took to Twitter to decry what he refers to as "the total collapse of the traditional confirmation process for a Supreme Court nominee."

When it comes to stopping Pres @realDonaldTrump and his agenda there seem to be no boundaries. Whether it’s coachi… https://t.co/m0CSHRI1L0
— Lindsey Graham (@Lindsey Graham) 1537799009.0

Graham called on his colleagues to "move forward witjh a hearing Thursday, and vote in committee soon thereafter."

@realDonaldTrump Clearly when it comes to President Trump, elections – in the eyes of Democrats – have no consequen… https://t.co/UzLadMlcAv
— Lindsey Graham (@Lindsey Graham) 1537799700.0

Dr. Christine Blasey Ford, the Stanford University professor who alleges Kavanaugh sexually assaulted her in high school, has committed to testify before the Senate Judiciary Committee on Thursday. A spokesman for the committee acknowledged that some details remain unsettled but said Senator Chuck Grassley, who chairs the committee, considers the negotiations "over."

Dr. Ford's lawyers confirmed this, saying the hearing would go on no matter how those details are resolved.

Despite actual threats to her safety and her life, Dr. Ford believes it is important for senators to hear directly from her about the sexual assault committed against her,” her lawyers, Debra S. Katz, Lisa J. Banks, and Michael R. Bromwich, said in a statement yesterday, adding that while some logistics remain unsettled, “they will not impede the hearing taking place.”

Attorneys for Dr. Ford are insisting that the FBI should investigate her allegation despite pushback from Republicans who have claimed that to initiate an investigation would significantly delay a vote which has already been postponed. This reasoning has already been shown to be faulty: The FBI investigation of Anita Hill’s allegations that Justice Clarence Thomas sexually harassed her when he was her supervisor at the United States Department of Education and the Equal Employment Opportunity Commission only took three days.