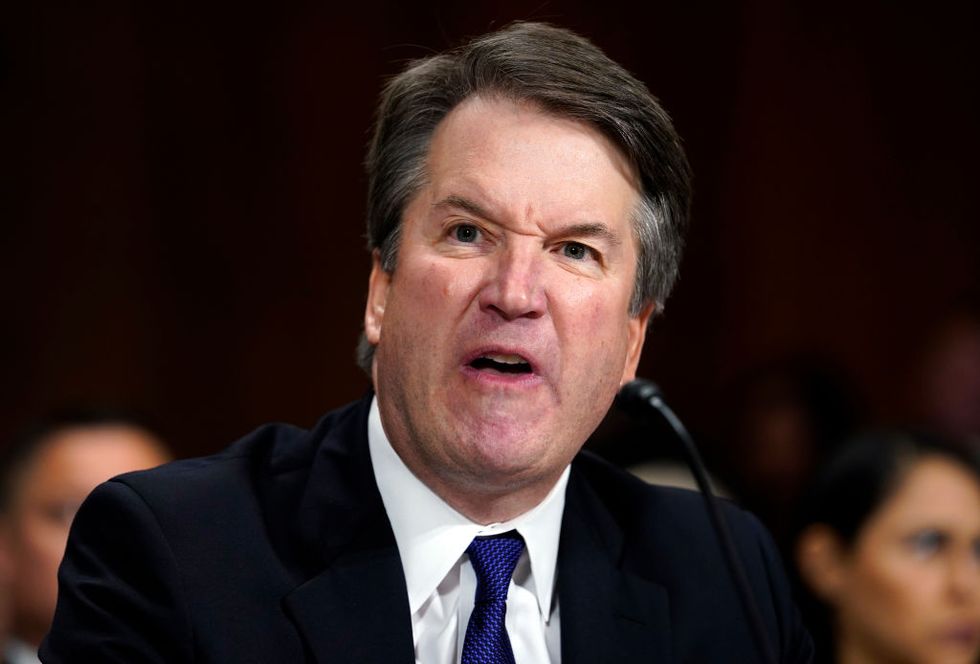 WASHINGTON, DC - SEPTEMBER 27: U.S. Supreme Court nominee Brett Kavanaugh testifies before the U.S. Senate Judiciary Committee at the Dirksen Senate Office Building on Capitol Hill September 27, 2018 in Washington, DC. Dr. Christine Blasey Ford, a professor at Palo Alto University and a research psychologist at the Stanford University School of Medicine, has accused Kavanaugh of sexually assaulting her during a party in 1982 when they were high school students in suburban Maryland. (Photo by Andrew Harnik-Pool/Getty Images)

Just ahead of a crucial senate vote on Supreme Court nominee Brett Kavanaugh's confirmation, the American Bar Association announced in a letter to Senate Judiciary Chairman Senator Chuck Grassley (R-IA) and Ranking Member Senator Dianne Feinstein (D-CA) that the association would be reexamining the "well-qualified" ranking it bestowed on Kavanaugh.

The letter cites that the ABA is concerned with Kavanaugh's temperament following the September 27th testimony he gave to the Senate Judiciary Committee regarding sexual assault allegations lobbied against him by Dr. Christine Blasey Ford.

"New information of a material nature regarding temperament during the September 27th hearing before the Senate Judiciary Committee has prompted a reopening of the Standing Committee's evaluation."

Republican senators in favor of Kavanaugh's confirmation have long cited his ABA rating to vouch for his qualifications as recently as today on the Senate floor.

The American Bar Association “has determined by a unanimous vote that Judge Kavanaugh is ‘Well Qualified’ for the p… https://t.co/P6SiIafua3
— Leader McConnell (@Leader McConnell) 1535747290.0

With one of the pro-Kavanaugh talking points now in limbo and unlikely to be resolved before the final vote, some are asking if Republicans still feel comfortable with the latest development.

This morning, on the floor of the Senate, McConnell relied on the ABA’s good recommendation of Kavanaugh. Now that… https://t.co/jfBlQiotS5
— Joyce Alene (@Joyce Alene) 1538751239.0

What's more, this isn't the first time the ABA has been skeptical of Kavanaugh's temperament.

As the New York Times reported earlier this week, the American Bar Association questioned Kavanaugh's temperament as early as 2006.

One judge called Mr. Kavanaugh simultaneously unprepared and sanctimonious. A lawyer said he had dissembled in his handling of a case. A third interviewee questioned Mr. Kavanaugh’s 'ability to be balanced and fair should he assume a federal judgeship.'”

The chairman of the American Bar Association said at the time:

“The 2006 interviews raised a new concern involving his potential for judicial temperament."

Subsequently, the ABA lowered Kavanaugh's rating from "highly qualified" to "qualified," though the Times clarifies that this is more of a hiccup on an otherwise exceptional resume on paper.

The Senate is expected to confirm Kavanaugh today, with these concerns likely falling upon deaf ears.