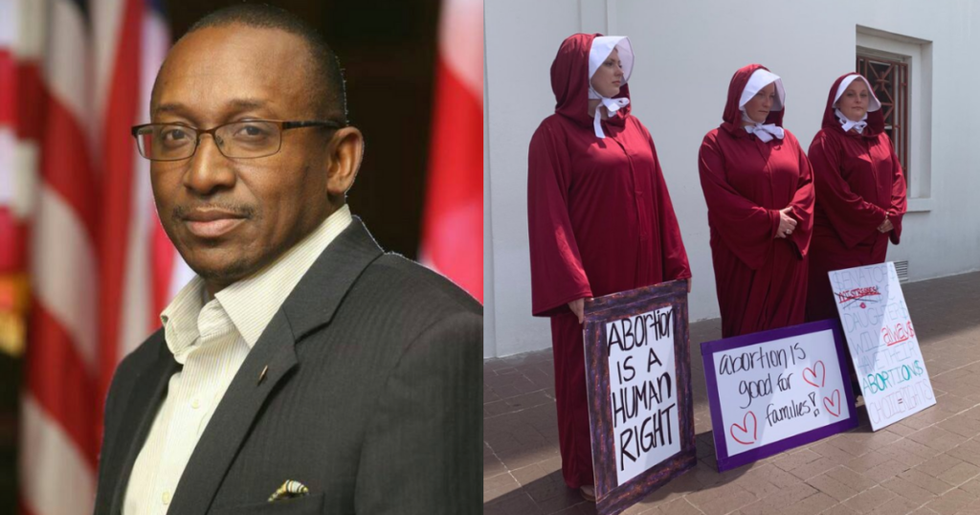 Republicans in the Alabama State Senate on Tuesday passed a bill effectively outlawing abortion in The Yellowhammer State, teeing up a potential Supreme Court showdown over the future of a woman's right to choose.

The draconian legislation - the most restrictive in the country and passed exclusively by men - prohibits terminating a pregnancy at any stage after conception except if the life of the mother is in danger. There are no exceptions for rape or incest. The proposed law also criminalizes the procedure itself. Doctors who perform abortions could face up to 99 years in prison.

This goes further than the anti-abortion bills in Georgia, Kentucky, Missouri, Ohio, and South Carolina, which ban abortions after the sixth week of pregnancy, even in cases of rape or incest. A similar law was recently struck down in North Carolina as unconstitutional.

On Wednesday, one Alabama lawmaker gave a tearful speech on the floor of the state legislature recalling the painful conversation he had with his daughter after the measure's passage.

"They're just women, you can kick 'em in the gut, it don't matter," Democrat Bobby Singleton said. "It's a sad day in Alabama, I feel like crying, I really do."

Singleton said that the law states that "you can be raped, or your uncles or cousins or somebody could just rape you, and impregnate you, and you gotta carry this baby under Alabama law."

He explained to his daughter that "if you have this abortion, that doctor's gonna go to jail for 99 years."

"That's sad, man," Singleton said. "Cause I got two little girls who could be raped tomorrow."

Even in case of sexual assault and incest, Alabama has passed a law that makes abortion illegal at any stage - from… https://t.co/DnmNsQTtqh
— The Femedic (@The Femedic) 1557945380.0

It’s fucking sick seeing how many people support the new law Alabama just passed. I get people are against abortio… https://t.co/fdcdUNXTkA
— bbri (@bbri) 1557945375.0

Chambliss revealed, in this response, that the #Alabama #abortion law has nothing to do with the sanctity of life,… https://t.co/hvxUMUSfbY
— Amy Keller (@Amy Keller) 1557945219.0

I think Alabama didn’t considerate all the options about abortion law carefully and decided to go in a very extreme… https://t.co/F9SxJYHz2r
— Carlos Rosas (@Carlos Rosas) 1557945989.0

This is what Republicans think of women.

@NBCNews To Conservatives...the ONLY time a daughter matters is when they are seen and not speaking. Alabama hasn'… https://t.co/bLoTbkbCLu
— Raevon (@Raevon) 1557918523.0

Alabama’s new abortion law absolutely disgusts me, and makes my heart aches for women around the globe, and in Alab… https://t.co/OIiItD9jHZ
— Big Boss (@Big Boss) 1557945717.0

Protesters dressed up as handmaids crowded the streets outside the Alabama State Capitol.

Democrats are disgusted and terrified.

As the bill was debated, Singleton read names of rape victims in attendance and emphasized the fact that under the law, abortion providers would be punished more harshly than rapists.

"A child is raped, has to have the baby," Schumer said, shaking his head. "The Alabama bill is as extreme as it gets. "It's a clear attack on a woman's freedom. It contravenes a woman's constitutional right to make private medical decisions. It would deeply hard women, turn doctors into criminals, deny the right of rape victims, even if they are children, to make personal medical decisions."

"The Alabama abortion bill is plainly inhumane," he continued. "It should never have been passed. The governor should not sign it, and if she does, it ought to be swiftly struck down by the courts."

Republicans, on the other hand, are now further emboldened in their quest to have Roe v. Wade overturned by the Supreme Court, a possibility that would have been unthinkable only months ago.

The blatantly unconstitutional Alabama law - like its counterparts in other red states - will certainly face immediate legal challenges by civil rights groups.

"Today is a dark day for women in Alabama and across this country," Staci Fox of Planned Parenthood Southeast said in a statement. "Alabama politicians will forever live in infamy for this vote and we will make sure that every woman knows who to hold accountable."

Republicans are banking on at least one of these lawsuits making its way to the conservative Supreme Court - the final hurdle in their decades-long effort to take away women's bodily autonomy.