Bob Woodward Just Explained How Donald Trump Reacts When He Is Confronted With Facts, and It Explains a Lot 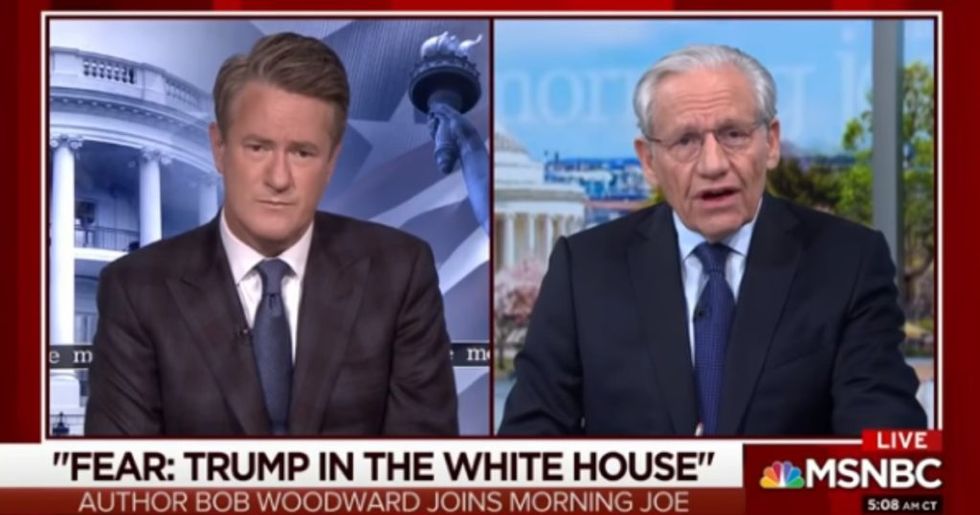 Bob Woodward's new book documenting the dysfunction of Donald Trump's White House, Fear: Trump in the White House, was released on Tuesday, and Woodward has been doing the media rounds.

Speaking to MSNBC's Joe Scarborough Wednesday morning, Woodward explained that President Donald Trump often throws tantrums when presented with information contrary to his worldview and that Trump "won’t face what’s real" and is waging a "war on truth."

"In the foreign policy areas, the handling of North Korea, Afghanistan, the Middle East, all of the immigration issues, all of the trade issues, I was able to excavate and find out actually what happened," Woodward said. "This is the pattern," Woodward added. Trump "won’t face what’s real."

The difference with Trump, Woodward said, is how Trump reacts when presented with facts.

"I think the key in examining Trump is actually what will he do when people present him with facts?" Woodward said. "For instance, it sounds a little esoteric, but the World Trade Organization, which the United States is a member of — very important, allows us to file complaints of unfair trade practices — and there’s a meeting in the Oval Office and the president says, ‘Well, the World Trade Organization is the worst organization ever. We lose all of our cases.'"

Woodward said Trump's aides presented him with data that showed the United States has won 85.7 percent of all the cases, Trump refused to accept it because it challenged his internalized beliefs.

"He says, ‘No, that’s not true,’ and the people are saying, ‘Look, call the U.S. trade representative, your guy, and he will confirm this,'” Woodward said.

Woodward said Trump wholeheartedly refuses to accept information that challenges his long-held beliefs, even if they are demonstrably untrue.

"At some point, he gets literally where the aides ask him, ‘Where did you get these ideas?'” Woodward said. "And he will say, ‘Well, I’ve had them for 30 years, they’re right and if you disagree, you’re wrong.'"

When it comes to foreign policy, Woodward said Trump obsesses over how much money the United States spends keeping troops overseas.

"What do we get out of this?" Trump asked during one meeting with national security officials. Secretary of Defense James Mattis had to explain to Trump that by keeping troops in South Korea, for example, "we're trying to prevent World War III." This occurred a year into Trump's presidency, according to Woodward.

On Tuesday night, Woodward appeared on The Rachel Maddow Show," where Maddow expressed concern over a president who may not be "right in the head."

Maddow quotes excerpts from Woodward's book in which he describes Trump as "emotionally overwrought, mercurial, and unpredictable." Woodward said Trump "closes his mind to the information that makes it possible for the president to weigh arguments and data." He added that even "the most ardent Trump supporter should give pause" and be concerned that "the White House and government are being managed this way."

Woodward is right, people are concerned.

One person joked that she is doubling her Xanax for the night.

"The alarm lights are blinking red."

"Unsettling" is how one follower described the Maddow-Woodward interview.

Just make it stop, others begged.