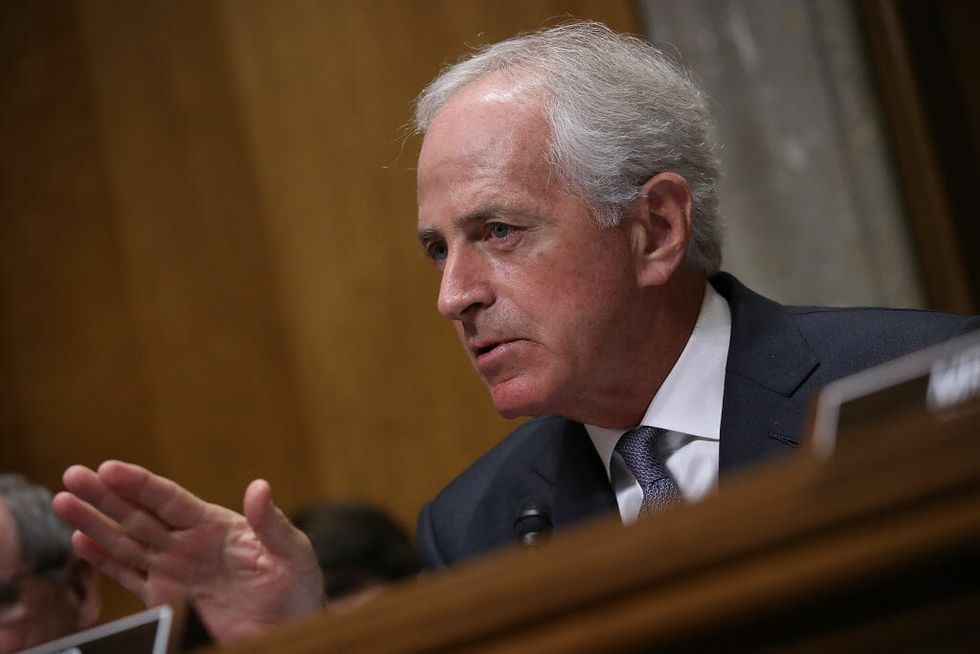 Senator Bob Corker (R-TN) had harsh words for his Republican colleagues for floating a balanced-budget amendment after pushing through a $1.3 trillion spending bill last week.

"Republicans control the House, Senate and White House. If we were serious about balancing the budget, we would do it. But instead of doing the real work, some will push this symbolic measure so they can feel good when they go home to face voters," he wrote on Twitter.

Republicans control the House, Senate and White House. If we were serious about balancing the budget, we would do i… https://t.co/6ODqX12M3z
— Senator Bob Corker (@Senator Bob Corker) 1522340941.0

Rep. Mark Walker (R-N.C.), the chairman of the Republican Study Committee was assured by House Speaker Paul Ryan (R-WI) that the House would vote on the balancing budget which would require 60 votes in the Senate and support from three-fourths of the states.

According to a senior GOP aide who spoke to The Daily Beast, Corker's statements have received stern rebukes from his fellow Republicans.

“Republicans are feeling the heat after campaigning on the deficit and the debt, and then literally voting to do the opposite with levels that may surpass the worst of Obama," the aide said.

The spending bill has been a contentious topic for Republicans––and for the president.

A few days ago, news broke that President Donald Trump eels “spurned” by the $1.3 trillion spending bill he signed last week which appropriated only $1.6 billion for his proposed border wall, far below the $25 billion he’d sought, and is privately pushing the U.S. military to fund construction for the project he made a cornerstone of his often incendiary campaign.

According to White House sources, Trump suggested the idea to several advisers last week, even telling House Speaker Paul Ryan that the military should pay for the wall. Ryan gave a rather muted reaction, these sources said, and senior Capitol Hill officials said it was “unlikely” the president’s suggestion would gain traction.

In another interaction with his senior aides, two White House sources said, the president noted that the spending bill appropriates so much money to the Department of Defense that the Pentagon––which received $700 billion––could surely afford the border wall.

That Trump would occupy himself with trying to find a way to subvert a spending bill he last week called “historic” but disappointing, is unsurprising. He signed the bill into law last week––much to the chagrin of many conservative supporters––avoiding a government shutdown that loomed large over Washington once the president took to Twitter to vent his frustrations with the bipartisan legislation.

In signing the legislation, the president backed down from his earlier threat to veto the bill after failing to reach a deal with with Democrats to preserve Deferred Action for Childhood Arrivals (DACA), Obama-era legislation which protects “DREAMers”––undocumented immigrants who were brought to the U.S. by their parents as children––from deportation.

The president appears to be hedging his bets on having the military pay for the wall, two advisers told Washington Post reporters, noting that when Trump tweeted “Build WALL through M!” earlier this week, the “M” was intended to stand for “military.”

The spending bill has not endeared Trump to even his more conservative supporters, and right-wing firebrand Ann Coulter––who is a noted deficit hawk––lashed out, lambasting the president for signing one of the largest increases in federal spending in years, saying “The 1980s called & they want their foreign policy back.”