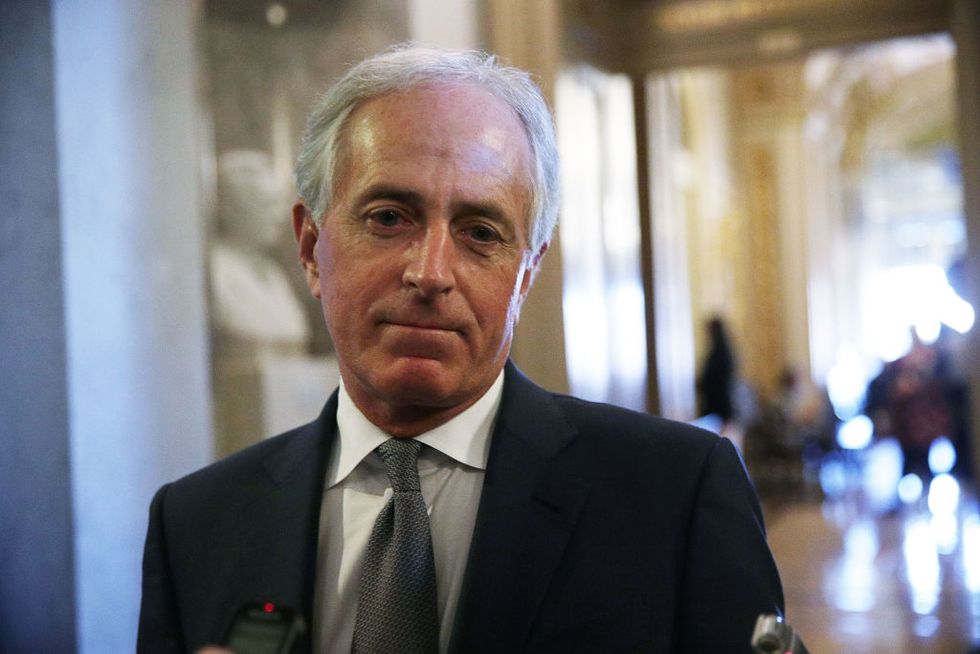 Senator Bob Corker (R-TN) was the only Republican to vote against the wildly unpopular GOP tax plan on the Senate floor two weeks ago, but he's since reversed his position. A new report indicates that a provision added during the reconciliation process would benefit Americans with large commercial real estate holdings––and Corker has plenty of large commercial real estate holdings.

The controversy surrounding Corker's reversal only intensified after Senate Majority Whip John Cornyn (R-TX) appeared on ABC News’ This Week and appeared to dodge questions about the provision. During a sit-down with George Stephanopoulos, who asked about the specific provision benefiting those with real estate income through LLCs, and the following exchange took place:

STEPHANOPOULOS: [This provision] apparently was added at the last minute. Why was that done? Why was it necessary to include that provision?

CORNYN: Well, we were working very hard. It was a very intense process. As I said, the Democrats refused to participate. And what we’ve tried to do is cobble together the votes we needed to get this bill passed, at the same time, maintaining the integrity of the largest tax cuts we're going to be seeing since 1986.

STEPHANOPOULOS: So is that how you got Senator Corker with this provision?

CORNYN: Well, the particular provision you're talking about, honestly, is just one piece of a 1,000-page bill which is going to grow the American economy. And, what we are seeing is that American corporations and businesses are not competitive in the global economy because we have the highest tax rate in the industrialized world. All we did is adopt ideas that people like Barack Obama and other Democrats have proposed when it comes to the business tax rates and should try to get our businesses more competitive, to increase take-home pay and to grow the number of jobs available for working-class families.

Corker's support, The International Business Times notes, "is considered pivotal in the closely divided Senate and he could be in a position to make or break the landmark legislation," and, the backlash, which has become known as #CorkerKickback on social media, prompted Corker to respond. He claimed he had only read a short summary of the legislation. I had like a two-page summary I went through with leadership,” said Corker. “I never saw the actual text.”

Corker later called IBT and asked for a "detailed description" of the provision. After reporters described it to him, he said: "If I understand what [the provision] does, it sounds totally unnecessary and borderline ridiculous.”

But he soon walked back that criticism: “I don’t really know what the provision does to be honest. I would need an accountant to explain it,” Corker said. “I had no knowledge of this and would have no knowledge of it except for you guys are calling me about it. I have no idea whatsoever whether it impacts me or doesn’t impact me.”

The controversy compelled Senator Ted Lieu (D-CA) to accuse Corker of attempting to enrich himself:

I can understand @SenBobCorker flipping his vote if new tax bill addressed why he voted NO, which was the deficit e… https://t.co/PlVjHalNi5
— Ted Lieu (@Ted Lieu) 1513563147.0

David Sirota, a journalist with IBT, provided a theory as to why Corker would have reversed his position on the tax plan so suddenly.

"Worth remembering when you think about the Corker story: With McCain out, if Corker and Flake or Collins vote no, Trump's entire $1.5 trillion tax bill will be defeated. That's how big the stakes are," he wrote."

Topher Spiro, the vice president for Health Policy and a senior fellow for Economic Policy at American Progress, also weighed in. With McCain missing the vote, Corker’s unexplained flip flop becomes critical—potentially the deciding vote. This should bring extreme, heightened scrutiny to the #CorkerKickback," he wrote.

In a letter sent yesterday to Senator Orrin Hatch (R-UT), how the provision to benefit those with commercial real-estate holdings ended up in the final version of the Republican tax measure:

My understanding from talking to leadership staff today is that a version of this provision was always in the House bill -- from the Ways & Means markup, through House floor consideration -- and in reconciling the divergent House and Senate approaches to pass-through businesses this House approach stayed in the final conferenced version.

Because this issue has raised concerns, I would ask that you provide an explanation of the evolution of this provision and how it made it into the final conference report.

No word yet on Hatch's response.