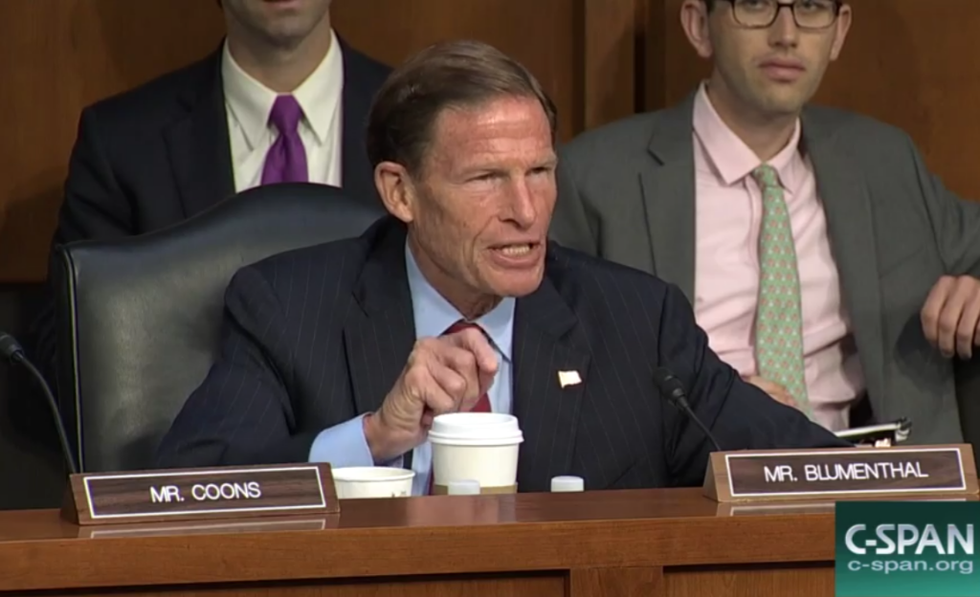 Tuesday, during a Senate Judiciary Committee hearing on the fallout from the Trump administration's zero tolerance policy, Connecticut Democratic Senator Richard Blumenthal began his allotted time by thanking those Trump administration and agency officials gathered for their patience and for the service of the men and women in law enforcement.

The policy change —created by President Donald Trump then enacted by Attorney General Jeff Sessions and enforced by Homeland Security Secretary Kirstjen Nielsen— resulted in thousands of children being separated from their families. The administration was ordered by a federal court to reunite families, but missed the court imposed deadlines.

Senator Blumenthal's first question to those panelists gathered —who worked on the implementation and enforcement of the zero tolerance policy— was,

All of the panelists kept their hands down.

Panel members included the acting chief of USBP and the head of ICE’s deportation unit on behalf of Homeland Security, director of the DoJ’s office for immigration review and the coordinating official of DHHS’ family reunification efforts.

After none of those agency experts endorsed the zero tolerance policy, Blumenthal asked,

Who thinks the family separation policy has been a success?"

Again, no one on the panel of Trump administration experts thought the policy successful. For the Senator's next question, he asked the panel,

Who can tell me who is responsible, which public official, which member of this administration is responsible for zero tolerance and family separation?"

The panelists remained silent, while some looked down at the table before them or shuffled papers. So Blumenthal asked,

"Can anyone tell me? Whose responsible? Nobody knows?"

Finally, after an extended awkward silence, the DoJ panelist replied that the "zero tolerance prosecution policy, the memorandum, was issued by the Attorney General on April 6, 2018."

Blumenthal however wanted clarification, asking if Sessions acted alone or if he acted on behalf of the Trump administration.

The DoJ representative only added that the April 2018 memo was an extension of a 2017 memo also signed by Sessions.

So the Connecticut legislator asked instead —since none of the panelists thought the zero tolerance or family separation policies were successful— if anyone stated their concerns, at any time, to anyone.

Did anyone —any member of this panel— say to anyone 'maybe this isn't such a good idea'?"

"During the deliberative process over the previous year, we raised a number of concerns in the program about any policy that would result in family separation, due to concerns we had about the best interests of the child as well whether that would be operationally supportable with the bed capacity we had."

The admission that the Trump administration looked at the policy changes a year in advance and were forewarned they would be harmful to the children as well as result in overcrowding and eventually overwhelming the ability of DHHS to properly care for the children did not sit well.

Blumenthal said he would translate the remarks from White into layman's language and asked,

You told the administration that kids would suffer as a result, that pain would be inflicted, correct?"

After White concurred that the policies would result in trauma to the children, Blumenthal asked about the administration response. The Senator wanted to know if the infliction of pain and trauma was the stated point of the policies, to act as a deterrent to asylum seekers.

The Senator's very specific question had a basis.

Presidential senior policy adviser Stephen Miller —the rumored architect of the policies— as well as Sessions reportedly stated at times that the taking of the children from their families was an effective deterrent.

In May, Sessions stated,

If you’re smuggling a child, then we’re going to prosecute you, and that child will be separated from you, probably, as required by law. If you don’t want your child separated, then don’t bring them across the border illegally."

But asylum seekers, according to United States law, are not entering the U.S. illegally, which is a misdemeanor offense for non-asylum seekers. But Trump's zero tolerance policy means DoJ prosecutors must treat asylum seekers like they are committing the misdemeanor crime until proven otherwise.

A case of guilty until proven innocent. Since public backlash over using family separation as a deterrent for those seeking asylum overwhelmed support for the policy, the Trump administration tried to walk back or reinterpret their prior comments.

However Commander White stated the Trump administration did not acknowledge the deterrent purpose of their policy. The administration only responded that "family separation was not the policy."

Blumenthal questioned that response however, quickly blowing a hole in it.

Family separation just happened to result from zero tolerance without anybody knowing in advance even though you raised the concern, correct?"

White could only respond that at no time while he was present did the Trump administration waver —despite being told exactly what would happen repeatedly by DHHS— from their denial that family separation would result from their zero tolerance policy.

The Trump administration separated almost 3,000 children —including infants and toddlers— from their  families with no plan in place to reunite them, before a U.S. district court ordered them to cease family separations.