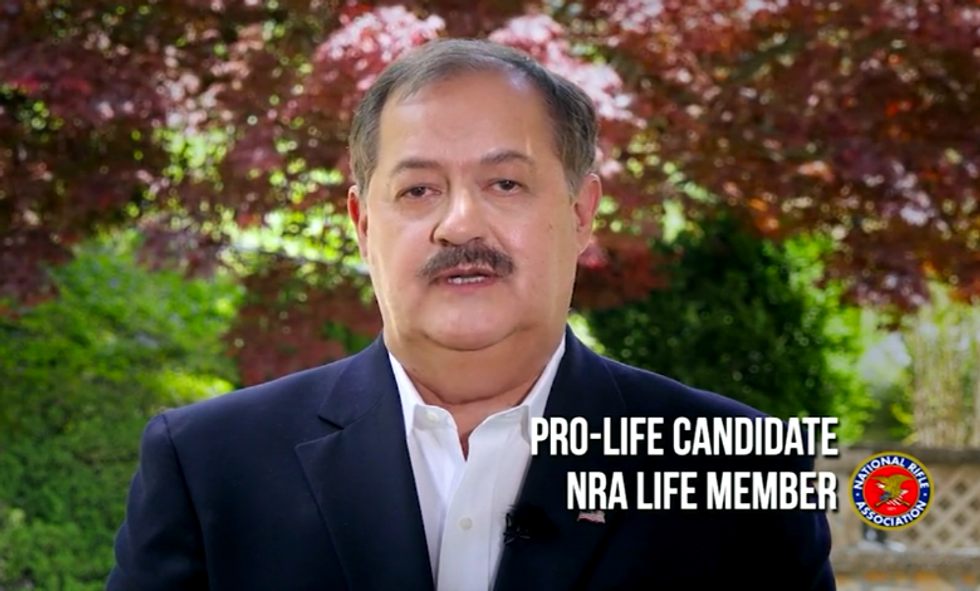 What in the world did I just watch pic.twitter.com/4eudpGAxp0

In a video that begins "Hi, I'm Don Blankenship, candidate for U.S. Senate, and I approve this ad," with a graphic proclaiming the man pictured is a "PRO-LIFE CANDIDATE" and "NRA LIFE MEMBER," the latest campaign ad from the former coal industry CEO veers into territory that left many people upset.

Republican candidate Blankenship is the only person appearing on camera, so the words come straight from the GOP hopeful himself. He begins his latest campaign ad by stating,

Swamp captain Mitch McConnell has created millions of jobs for 'China people'. While doing so, Mitch has gotten rich. In fact his 'China family' has given him tens of millions of dollars."

It doesn't improve greatly from there. In a complete deadpan style, directly into the camera lens, Blankenship takes a few more swipes at a senator from another state.

"Mitch's swamp people are now running false negative ads against me," he claims. "They're also childishly calling me despicable and mentally ill."

The war to drain the swamp and create jobs for West Virginia people has begun. I will beat (incumbent) Joe Manchin and ditch cocaine Mitch for the sake of the kids."

Blankenship characterizes himself as a Republican loyalist of President Trump with an America First agenda and calls himself an “American competitionist.” The outspoken Trump supporter and former Chairman & CEO of Massey Energy is fresh out of serving a year in jail for his part in the deaths of 29 miners in the Upper Big Branch Mine disaster.

Blankenship had faced up to 30 years in prison on several charges including felony conspiracy, but was convicted of one misdemeanor charge of conspiring to willfully violate mine safety and health standards leading to the 29 deaths. Appeals on his conviction were dismissed.

This is not Blankenship's first use of "China people" or "China family," but the Republican Senate hopeful says there is nothing racist about the terms. During a primary debate, he stated,

I don’t see this insinuation by the press that there’s something racist about saying a ‘Chinaperson. Some people are Korean persons, and some of them are African persons. That’s not any slander there."

Blankenship is in the running in the Republican primary for the chance to challenge West Virginia incumbent Democratic Senator Joe Manchin. However he frequently targets incumbent Senator and Senate Majority Leader Mitch McConnell, and his "China family," from the neighboring state of Kentucky.

Much of the ire began after McConnell's super PAC released ads against Blankenship.

The West Virginian claims his issue with the Senate Majority Leader is related to conflicts of interest in foreign relations because McConnell's father-in-law is a “wealthy Chinaperson.” He states he does not have “any problem with China.”

“But I have an issue when the father-in-law is a wealthy Chinaperson and there’s a lot of connections to some of the brass, if you will, in China,” Blankenship said, referring to McConnell’s father-in-law, James Chao. McConnell is married to Elaine Chao.

In a previous ad that got skewered by late night comedian Stephen Colbert, the self proclaimed Trump loyalist also referred to McConnell as "cocaine Mitch."

While Blankenship maintains there is nothing wrong with his word choices, the feedback is not very positive.

I'm offended less by the racism than I am that someone with no communication skills could get this far running for… https://t.co/M5UlPY9fAm
— Kyle Whitmire (@Kyle Whitmire) 1525445158.0

If you put a character like Blankenship in your liberal protest novel it would be panned as didactic and unrealistic
— Adam Serwer🍝 (@Adam Serwer🍝) 1525385418.0

Sadly for the staunch Trump supporter, the president doesn't have his back either. His son, Donald Trump Jr., encouraged people to reject Don Blankenship's Senate candidacy, not because of his message, but because he might lose like Roy Moore did in Alabama.