This Anti-Ted Cruz Billboard On a Truck in Texas Is Just a Blown Up Donald Trump Tweet, and People Can't Get Enough 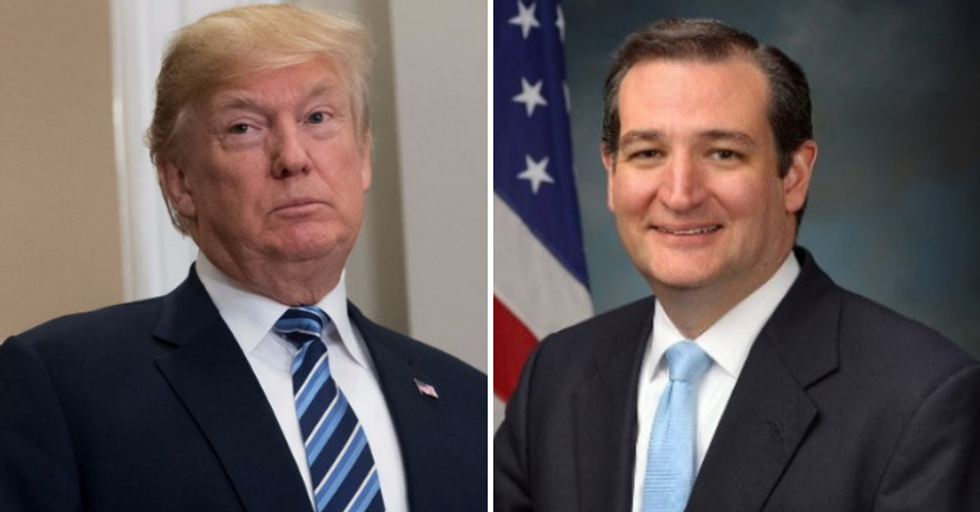 During the 2016 presidential election, no love was lost between Republican rivals and outsider Donald Trump. Insults routinely flew between the GOP insiders and the New York businessman.

And as is his wont, Trump took to Twitter to further debase a certain Texas Senator. Now one of those Trump tweets about Ted Cruz is being used by those trying to defeat the incumbent Republican in November's midterm election.

And they are using it in a very big way.

A 22-foot-long truck sporting one of Trump's tweets directed at Cruz is making the rounds in Texas. What began as a joke led to a GoFundMe effort to buy a billboard showing what Trump said about Cruz. The truck sports this Trump Twitter post:

Why would the people of Texas support Ted Cruz when he has accomplished absolutely nothing for them. He is another all talk, no action pol!
— Donald J. Trump (@Donald J. Trump) 1456678033.0

But once the funding goal was met, Antonio Arellano—a Houston-based activist and Latinx community organizer—decided a rolling billboard would reach more voters. Rather than be limited to a single spot, a truck became the location for their message.

Activists David Hogg and Claude Taylor also joined the effort and celebrated online after the funding goal achievement. Hogg also shared that there was no shortage of Trump insult tweets for Cruz.

Arellano finally decided on the tweet featured on the truck. Since then, the truck spawned its own hashtag, #TrumpTweetTruck, and has been spotted around Texas at different events.

While Arellano capped the original funding after $,9,760.00, he may seek further funding to send the truck further out of central Texas.

The relationship between President Donald Trump and Senator Ted Cruz is complicated.

When the two squared off over the Republican nomination in the 2016 presidential election, insults flew back and forth between the pair.

Cruz fired back after Trump accused his father of participating in the assassination of President Kennedy and made disparaging remarks about the attractiveness of Cruz's wife. But 7 months later, Cruz sat in a Trump campaign office in Texas making phone calls on behalf of the man who insulted his family.

Ted Cruz doesn't have an ounce of integrity in his entire body. When Donald Trump called his wife ugly and accused… https://t.co/lzwLozmcLi
— Nathan Wilson. (@Nathan Wilson.) 1538150950.0

In August, Trump announced he would do a rally for Cruz in Texas in October.

It was this endorsement that spawned the joke that became the rolling Trump tweet billboard. Midterm elections are slated for Tuesday, November 6, 2018.