Trump Unveils New Defense of His Call With the Ukrainian President: Ukraine Didn't Know About the Quid Pro Quo 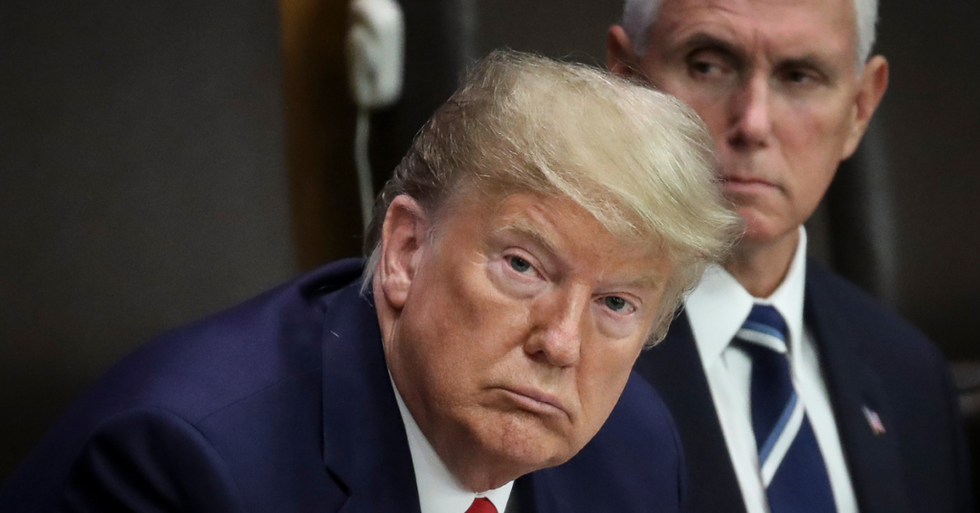 In other words: the Trump Administration gave a quid pro quo (military assistance for political dirt) to Ukrainian leadership, flying in the face of the Republican talking point that Trump gave no such quid pro quo in the rough transcript of the July 25 call with Zelenskyy that spurred the inquiry.

In full spin mode, Trump took to Twitter to quote Congressman John Ratcliffe, who let loose a whole new argument about the quid pro quo, that Trump was eager to amplify:

That the Ukrainians were not "aware that military aid was being withheld" at the time of Trump's call with Zelensky.

Neither he (Taylor) or any other witness has provided testimony that the Ukrainians were aware that military aid wa… https://t.co/hWjKgcVDz2
— Donald J. Trump (@Donald J. Trump) 1571830336.0

It's an echo of an argument that none other than Sean Hannity made on his show Tuesday night, stating:

"During the call, the government of Ukraine had no idea the U.S. had temporarily delayed aid."

No matter how many times they repeat the talking point, it doesn't make it true.

The hold on the assistance began in July and didn't end until September.

According to Taylor's testimony, the Ukrainians—who rely on foreign military assistance to preserve their democracy from Russian aggression—definitely knew the aid was being withheld.

"Ambassador Sondland said that he had talked to President Zelensky and [Ukrainian Presidential Advisor Andriy] Yermak and told them that, although this was not a quid pro quo, if President Zelensky did not 'clear things up' in public, we would be at a 'stalemate.' I understood a “stalemate” to mean that Ukraine would not receive the much-needed military assistance."

Sondland may have said his ultimatum was no quid pro quo, but in reality, it's the definition of one.

Taylor asserted throughout the opening testimony that Ukrainians knew crucial military aid was on the line.

"[On] August 29, Yermak contacted me and was very concerned, asking about the withheld security assistance. The hold that the White House had placed on the assistance had just been made public that day in a Politico story. At that point, I was embarrassed that I could give him no explanation for why it was withheld."

After learning of the hold on aid, they soon learned the reason.

"[EU Ambassador Gordon] Sondland told Mr. Yermak that the security assistance money would not come until President Zelenskyy committed to pursue the Burisma investigation. I was alarmed by what Mr. Morrison told me about the Sondland-Yermak conversation. This was the first time I had heard that the security assistance—not just the White House meeting—was conditioned on the investigations."

"On September 5, I hosted Senators Johnson and Murphy for a visit to Kyiv. During their visit, we met with President Zelenskyy. His first question to the senators was about the withheld security assistance."

So Trump's assertion that Ukrainians didn't know military assistance was being withheld, so there couldn't have been a quid pro quo is yet another falsehood to add to the President's 13,435 piece collection.

Dear @realDonaldTrump: This is a lie. I attended multiple depositions, including the deposition of American patriot… https://t.co/usUbezvFC2
— Ted Lieu (@Ted Lieu) 1571831808.0

This is probably one of the most bizarre legal defenses I have ever seen. "How could it be theft if the victim wasn… https://t.co/gMzDt9Ceal
— Christopher Bouzy (@Christopher Bouzy) 1571831173.0

Some took Trump's tweet to be an admission that there was a quid pro quo the entire time.

The confessions are stunning - admitting he did it and now seeming to say “I did it but the Ukrainians didn’t know… https://t.co/YL3j2Wex3g
— Nicolle Wallace (@Nicolle Wallace) 1571831023.0

He probably doesn’t realize it. But this implicitly acknowledges that there WAS a quid pro quo but because Ukraine… https://t.co/GRtxXnTbWj
— Sam Stein (@Sam Stein) 1571830596.0

How many lies are we willing to accept from the President of the United States?