Bill Nye the Science Guy Just Explained Global Warming to Adults, and This Time He's Dropping F Bombs All Over the Place 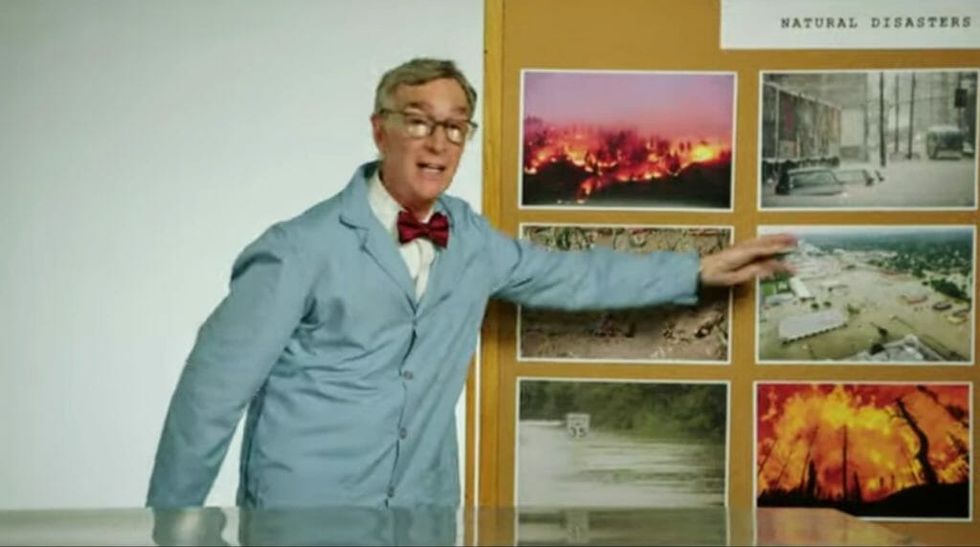 In Sunday night's Last Week Tonight with John Oliver, the HBO program host enlisted the aid of Bill Nye the Science Guy. Nye—who holds a degree in mechanical engineering from Cornell—is best known for teaching children the basics of science on his Emmy winning television show.

But his appearance on HBO Sunday was strictly for the adults. Oliver asked Nye to explain carbon pricing as it relates to climate change and global warming.

Oliver did a segment on the Green New Deal for his program, which can be seen in its entirety at the end of this article. Oliver wanted to clear up the misinformation campaign rhetoric spread by those opposed to it and clarify:

"...what it is, what it isn’t and, most importantly, where we should maybe go from here."

Nye's full appearance on the program can be viewed here.

At the very end of the segment when Oliver again threw things over to the science educator, Nye stated:

"By the end of this century, if emissions keep rising, the average temperature on Earth could go up another four to eight degrees."

"What I’m saying is the planet’s on fucking fire. There are a lot of things we could do to put it out—are any of them free? No, of course not. Nothing’s free, you idiots."

"Grow the fuck up. You’re not children anymore. I didn’t mind explaining photosynthesis to you when you were 12. But you’re adults now, and this is an actual crisis, got it? Safety glasses off, motherfuckers."

Others were on board with Nye's no nonsense facts too. Clips of Nye's comments quickly made it to social media.

Although some took exception to the language and missed the message, but others pointed it out.

The Republican controlled Senate took a pass on the proposal in March to the surprise of no one, but several 2020 presidential candidates embraced it.