Bill Maher Just Rattled Off a Long List of Bonkers Things Donald Trump Has Done and Asked 'What If Obama Did It', and Yeah, We All Know the Answer 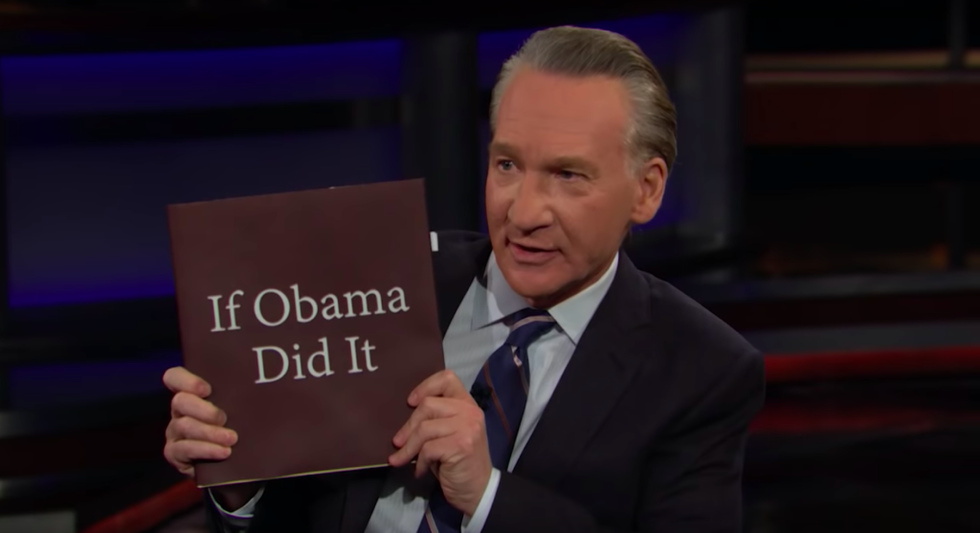 As host of HBO's Real Time, Bill Maher isn't afraid to point out the partisan hypocrisy rampant in Washington, DC.

Maher interviewed Conservative Political Action Conference (CPAC) chairman Matt Schlapp about his support of President Donald Trump, whose two and a half hour speech at CPAC rallied Conservatives but raised eyebrows among everyone else.

After asking Schlapp about how he reconciles his Christian faith with his support of Trump, Maher brandished an oversized book called If Obama Did It, calling out the double standard of just how much Republicans are ready to tolerate from the executive branch when its head is no longer a Democrat or the first black President.

Maher took the position that Obama would've been impeached if implicated in any scandal similar to the many that Trump has found himself embroiled in.

"If he had unchaperoned talks with Putin—Can you imagine if Obama did that? If he said, 'I believe Putin.' If he gave his children jobs in the administration. What about this one? He scammed FEMA, we found out. He got $17 million out of FEMA, for damage that wasn't done during a hurricane, to Mar-a-Lago."

Schlapp finally responded in defense of Trump, citing all he had done.

"When people in the news media have this constant refrain that he has been so dishonest as President, they have to understand that for the people who supported him, they view him as doing what he said he would do."

Twitter agreed with Maher that Obama was held at a much higher standard.

We already know the answer to that question. They'd have started impeachment hearings the minute he took office. https://t.co/5exgNbaIGc
— Crooks and Liars (@Crooks and Liars) 1552149664.0

Soon, people were recalling recent actions by Trump that Obama would've never gotten away with.

Like signing bibles and breasts at the same event.

@RadioFreeTom @JGlenCollins If President Obama did this they’d go berserk, but any asinine thing trump does they ar… https://t.co/2wZpgdzqSe
— David Plomin (@David Plomin) 1552175331.0

Among other recent scandals.

Can you imagine if Obama was ever accused of being pimped out to foreign businessmen by a woman who also sells hand… https://t.co/WOPHy39gql
— Court Swift (@Court Swift) 1552147115.0

No one knows which atrocity—if any—will be shocking enough to tip the scales against Trump.