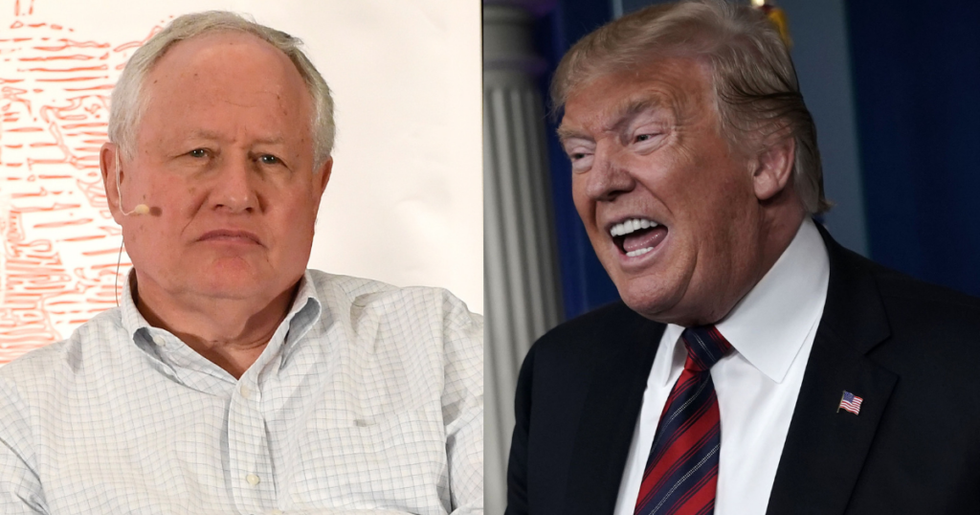 Shortly after Nancy Pelosi (D-CA) was sworn in as the 52nd Speaker of the House, President Donald Trump made an impromptu cameo at a White House press conference in what was clearly a desperate ploy for attention.

Trump began by congratulating Pelosi on becoming Speaker for the second time.

"I just want to start off by congratulating Nancy Pelosi on being elected Speaker of the House," Trump said. "It's a very, very great achievement, and hopefully we're going to work together and we're going to get lots of things done, like infrastructure and so much more."

The president then began rambling about the importance of a border wall.

"the wall or the barrier."

"Donald Trump couldn't stand it that Nancy Pelosi was the center of attention today," Kristol said on CNN, "so he had to butt in at 4:30 in the afternoon. It's pretty disgraceful."

Twitter, not missing a beat, also panned Trump for being incapable of sharing the spotlight.

@brianstelter @BillKristol He can’t stand not being the center of attention. Just look at the poster he had in the… https://t.co/afZJeJLvWO
— Cathy McFe (@Cathy McFe) 1546551581.0

@brianstelter @BillKristol It’s totally disgusting but seriously not at all shocking.
— Marci (@Marci) 1546551812.0

People are upset that the media indulged Trump.

They fall for it every time.

@brianstelter @BillKristol CNN should stop covering this! Get the focus back to Nancy Pelosi! Why feed into exactly what he wants??
— Corinna (@Corinna) 1546551844.0

Everything has to be all about Trump, all the time.

@ABCPolitics He talks for a couple of minutes and leaves without taking questions. It's a political stunt meant to… https://t.co/FA5EBHILwd
— lawhawk (@lawhawk) 1546552110.0

@ABCPolitics The ony thing @realDonaldTrump could tell me he knows most about that I would believe is narcissism. D… https://t.co/uGyuV6d8Oz
— Jeanette (@Jeanette) 1546552083.0

Trump did not take any questions following his appearance, but boy do we have some.