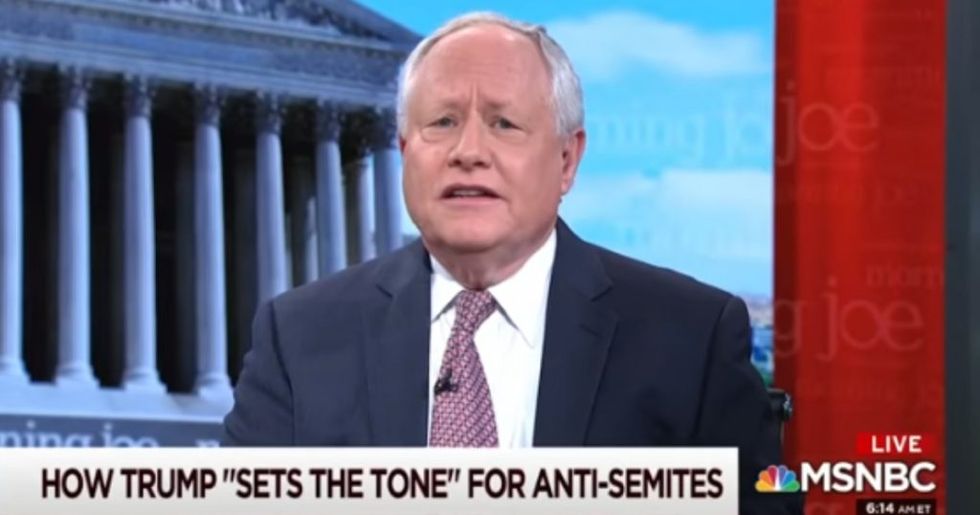 Former Fox News contributor Bill Kristol slammed his former employer for stoking the flames of hate that led to the slaughter of 11 Jews at a Pittsburgh synagogue on Saturday.

In an appearance on MSNBC's Morning Joe on Monday, Kristol blasted Fox for peddling conspiracy theories in the name of profit despite the danger to public safety.

“I’m a free speech person, and I’m not for being super fastidious about calling people to account about things that are said in the heat of the moment and so forth,” Kristol said. “(But) at the end of the day I think Fox, with its evening lineup, Fox Business with Lou Dobbs, the routine stuff that is said there, people who work at Fox, the management of Fox, the shareholders of Fox, the corporate board of Fox really need to look in the mirror and say, ‘Are we comfortable with this? We’re making money.'”

“Obviously no one wants a board of directors to be micromanaging saying you can’t say this on the 8 p.m. show," he said, "but are they comfortable with the overall effect that Fox News and Fox Business, and I say this as someone who was on Fox News for 10 years. Can they defend their effect on the culture?”

Kristol tore into Fox on Twitter after Fox & Friends host Brian Kilmeade suggested that "entire populations" of immigrants are bringing "diseases" to the United States.

"No disease any refugee might bring to America is as dangerous as the disease of fear, bigotry and hatred now being spread in America by Fox."

No disease any refugee might bring to America is as dangerous as the disease of fear, bigotry and hatred now being… https://t.co/1nsYZUeQAE
— Bill Kristol (@Bill Kristol) 1540810479.0

A doctor chimed in on why Kilmeade's statement was ridiculous.

Some think they found the real disease, and it's not refugees seeking asylum.

@BillKristol @PamKrugerwriter The disease is called Fascism, and it has invested the Republican Party. Get out and… https://t.co/XVoV4jAVXN
— Madison Law Review (@Madison Law Review) 1540810805.0

@BillKristol @RF_P0TUS these people are walking thousands of miles, what 'disease' gives a person the ability to do that?
— Alt-Middle (@Alt-Middle) 1540813563.0

@BillKristol @TheSageOfReason Projectionism. The only population who came to this country with so many diseases the… https://t.co/2FGYWWjeAD
— S M Solomon (@S M Solomon) 1540813774.0

@BillKristol The Fox and Friends group is an entire population that can spread the diseases of racism, hatred and f… https://t.co/w1r7rpFWs7
— Colleen Callan (@Colleen Callan) 1540810847.0

The conversation continued after Kristol tweeted: "The United States of America has a Fox News problem."

Followers agreed, noting that after the shooting on Saturday, Fox News doubled-down on their conspiratorial rhetoric.

"They. Want. This," one person wrote.

@BillKristol The fact that Fox didn’t squelch the filth even for one night after the synagogue massacre - heck, the… https://t.co/G0mxYf4JeU
— Michael (@Michael) 1540812714.0

Others referred to Fox as "state-run television" because of its near-constant defense of President Donald Trump, who regularly calls in to vent and have his worldview reaffirmed.

Kristol isn't alone in his concerns.

@BillKristol It does indeed. The next Congress should reinstate the "Fairness Doctrine" that got scrapped by Reagan… https://t.co/1853xO0JpW
— Chris Lutolf (@Chris Lutolf) 1540822131.0

@BillKristol Glad to see conservatives are waking up to this. To me it's the primary cause of why we ended up wher… https://t.co/KOUEjqsXlu
— Bob Young (@Bob Young) 1540822747.0

@BillKristol The atmosphere in America would improve immediately if FOX News was shut down. They purposely incite v… https://t.co/N1PKEB0a6Z
— Reigart (@Reigart) 1540821088.0

@BillKristol I have seen family logical thinking people turn into nothing more than a cult. Limbaugh, Jones all the… https://t.co/vxaIrs4fkJ
— Ne (@Ne) 1540823109.0

White nationalist hate crimes over the last week have awoken the country to a sobering reality. The rhetoric bellowing from the president is motivating those who would do harm making the country less safe, less free, and less secure for all.