The Founder of Bikers for Trump Just Revealed That Pro-Trump T-Shirts Are Too Expensive to Make in the U.S., and the Irony is Rich

So much for America First. 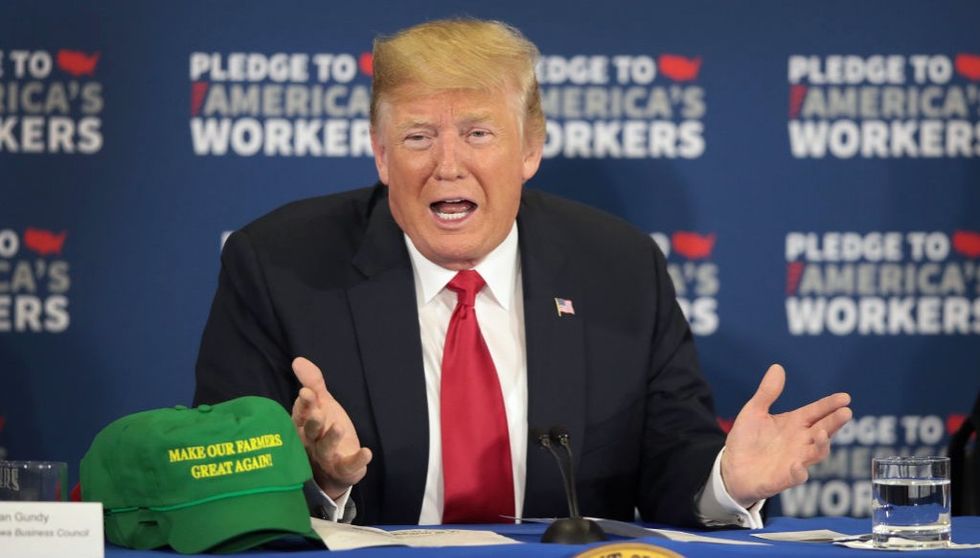 At a recent Made in America event held at the White House in July, the Trump Organization and President Donald Trump received heavy criticism for a lack of any of their products being made in the United States. Now it appears the Bikers for Trump organization suffers from the same issue.

Chris Cox, founder of the pro-Trump group confirmed the shirts his group wears get made in Haiti, not in the United States. A fact which belies the America First slogan.

But it is not the Bikers for Trump organization's fault. According to Cox, t-shirt makers in the United States simply engage in price gouging.

If I get a T-shirt made in the USA, it’s going to cost about $8 more. I looked far and wide to try to get a shirt made in America, it’s just they get you, they gouge you."

The United States motorcycle manufacturer also claimed—thanks to the President's trade war with Mexico, China, Canada and the European Union—producing their bikes bound for their large market in Europe too expensive in the U.S. after retaliatory EU tariffs were levied. And after Trump's withdrawal from the TPP, Harley-Davidson decided to move manufacturing for that market to Thailand.

Cox and Bikers for Trump—and the President himself based on threatening Twitter posts aimed at the motorcycle manufacturer—take exception with Harley-Davidson moving manufacturing for overseas markets to overseas locations.

But neither find issue with their products intended for U.S. markets being made outside the United States.

But why are products much cheaper when made in the Trump Organization's favorite locations, China and Mexico, and Bikers for Trump's preferred location, Haiti? Is it because of United States clothing manufacturers price gouging?

So what is the real reason?

While many U.S. workers do not make a living wage—one that allows them to afford food and shelter on a 40 hour work week at minimum wage—they do earn a minimum wage. It is those wages as well as the Department of Labor's Occupational Safety and Health Administration (OSHA) worker safety requirements that make manufacturing more expensive in the United States.

@arappeport @NDBarks That gouging might just have something to do with paying workers the minimum wage.
— Jane (@Jane) 1534018198.0

@Poeia @arappeport @NDBarks And better working conditions. They don’t understand why (made in China) crap at Walmart is so cheap. 🤦‍♀️
— Christy Denton (@Christy Denton) 1534027987.0

In China, Mexico and Haiti, the Trump Organization and the pro-Trump organization enjoy all the benefits of unsafe working conditions and workers earning dollars per day, not dollars per hour. This well documented fact fails to bother either organization.

But they openly criticize Harley-Davidson.

And one person brought up a mostly ignored fact of economics.

An official statement from the White House—or a tweet from the President—condemning Bikers for Trump in the manner they criticized Harely-Davidson has as yet not been made.