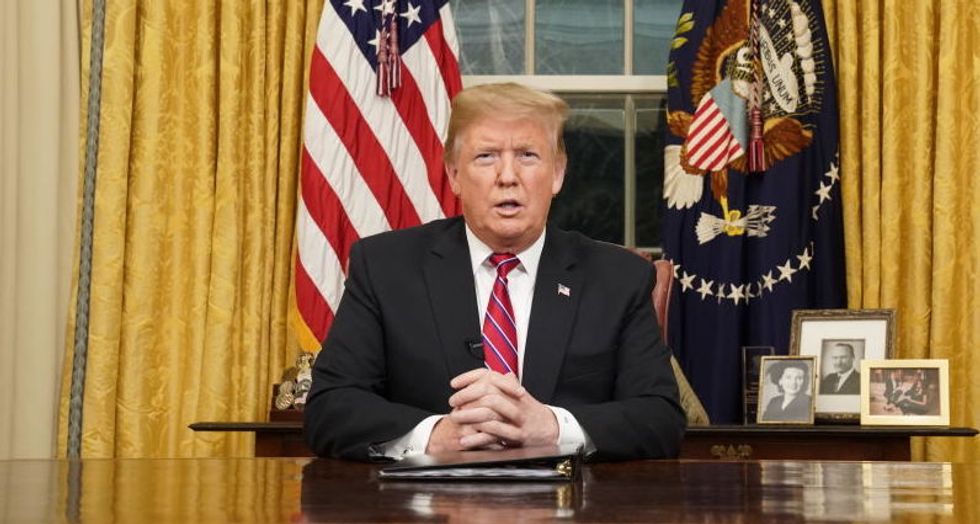 U.S. President Donald Trump delivers a televised address to the nation from his desk in the Oval Office about immigration and the southern U.S. border on the 18th day of a partial government shutdown at the White House in Washington, U.S., January 8, 2019. (REUTERS/Carlos Barria/Getty images)

President Donald Trump's propensity for near constant lying—an asset when he was a private businessman trying to appear more successful than his bottom line before investors and the public—paid off for people Tuesday night.

How could a President with a passing relationship with the truth pay off?

And that turned out to be the winning bet.

According to their fact-checker—the bookmaker relied on The Washington Post—Trump lied six times during his approximately nine minute address. That's a little less than one untruth per minute.

While no one was surprised in the United States, the betting site based in the European Union underestimated the President's ability and frequency of telling lies and how many people would choose to bet on Trump telling many lies.

After all, several organizations dedicate at least part of their time to tracking what some refer to as the true Trump administration legacy: a President that lies every time he speaks to the public and the personnel who support and perpetuate his untruths.

"It's a bad day for Truthiness and Bookmaker. We knew we were in trouble early with this one."

He added why the site bet on making money with the President telling fewer rather than more lies.

"We figured the president's strategy going in would be a bit of fear mongering to create pressure on the Democrats to approve the funding of the wall (or barrier), however the president was also constrained by an approximate 8-minute time limit."

Bookmaker gambled on the President lying less due to the close scrutiny, but lost. Lester explained:

"With all the cable networks agreeing to air the speech, it came down to, how many times is the president willing to exaggerate the truth to accomplish his agenda, when he knows the world will be scrutinizing his every word?"

People's reactions to news of Bookmaker's losses due to the President's willingness to lie were also predictable.

People were disappointed they did not have a chance to bet on Trump's willingness to lie to people in the United States in a live telecast.

@BuzzFeed @gtconway3d I would have bet my monthly pension he would lie a minimum of 3 times. trump can't help himself
— Adrian Murray (@Adrian Murray) 1547035760.0

Others could not believe Bookmaker set the lies threshold so low.

And some characterized the President's behavior as childish.

@BuzzFeed He lies because the truth is he's never had anything valuable to offer so he makes stuff up to make it seem like he does.
— #HighPlainsGirl (@#HighPlainsGirl) 1547041994.0

But was there another motive for the speech?

Shortly after the speech aired, the Trump campaign sent out an email asking for donations.

Trump just sent his SECOND fundraising email today asking for money based on his "speech" This was a campaign even… https://t.co/Nr7JSMcomZ
— Andrew Lawrence (@Andrew Lawrence) 1547001433.0