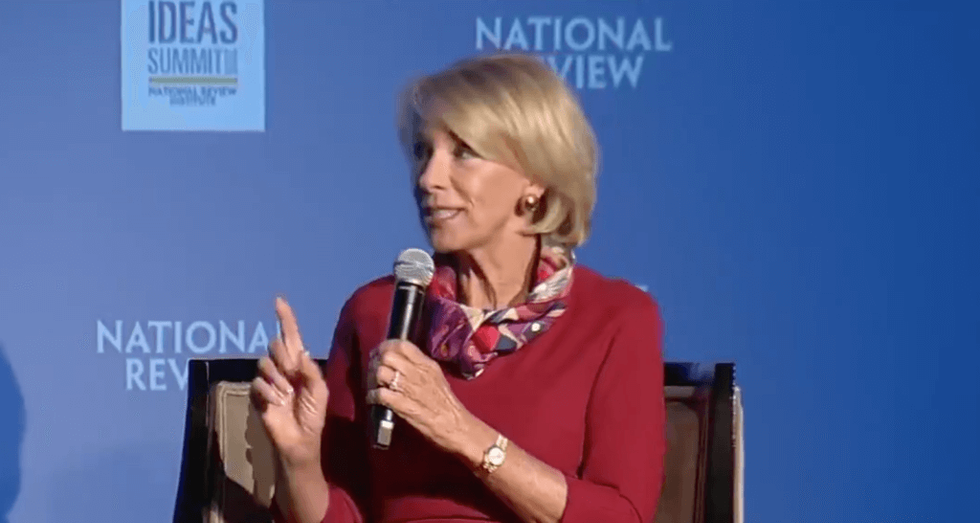 Days after national outcry against her proposed defunding of the Special Olympics and slashes to special education programs, Education Secretary Betsy DeVos sat down for a conversation with Jay Nordlinger of the National Review for the publication's annual Ideas Summit.

Nordlinger, after asserting that he was glad DeVos is Education Secretary, asked DeVos if she felt the same.

DeVos's tenure as Education Secretary has been fraught with missteps and panned for horrendous policy proposals like making it harder for sexual assault victims on college campuses to get justice and cutting student loan forgiveness.

As a result, many made it clear that DeVos and Nadlinger were the only ones "glad" about DeVos's appointment.

@thehill I’m not glad she is Education Secretary she is unqualified as the man who appointed her
— Elizabeth (@Elizabeth) 1553893657.0

Others were critical of Nadlinger's questioning.

@thehill He must quantify his statement. Why is he glad she’s Education Secretary? What does he have to gain with h… https://t.co/zAZ3ClHacC
— Misty Powell (@Misty Powell) 1553894171.0

And, of course, they weren't happy with DeVos's performance.

They questioned why she was in the position in the first place.

@thehill Why would anyone be glad she's Education Secretary? Is there literally anything in her background that wou… https://t.co/BRddQrB0FY
— CJ Makaryk (@CJ Makaryk) 1553893964.0

At least she's happy with herself.