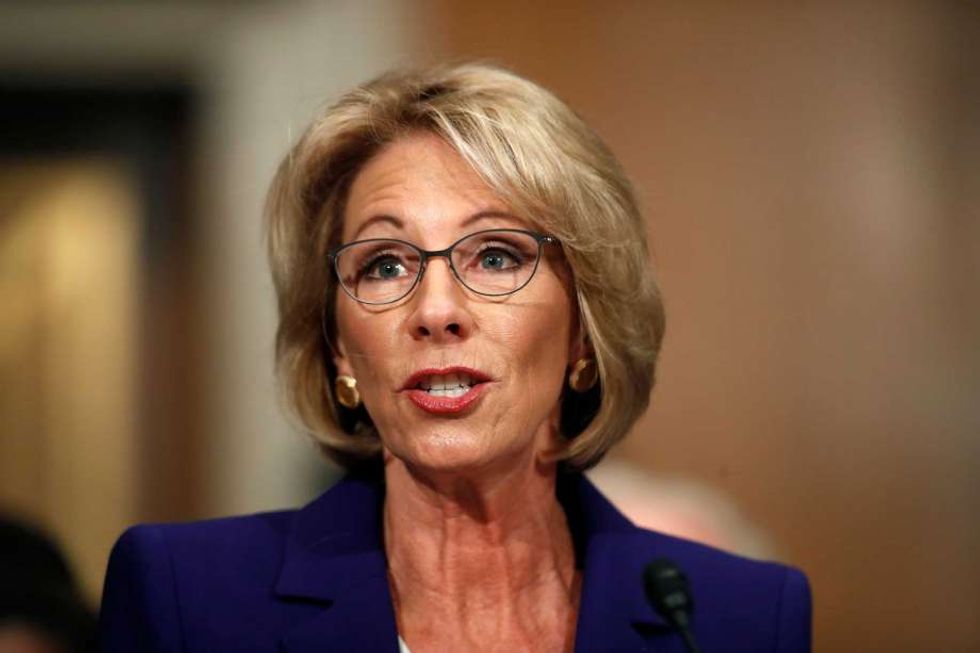 Betsy DeVos, President-elect Donald Trump's nominee for Secretary of Education, was the first nominee to have a Senate hearing without completing an ethics review on how she planned to avoid conflicts of interest. DeVos, a billionaire who has donated millions to Republican candidates and holds a host of investments, including in companies that influence federal education policy, has no experience in the education sector, has never attended a public school or sent her children to public schools and has never taken out a student loan. These facts did not escape Senator Elizabeth Warren (D-Massachusetts).

“So you have no personal experience with college financial aid?” Warren asked.

DeVos responded by touting a "market-oriented" vision of education policy, such as giving taxpayer-funded vouchers to low-income students to attend private schools. Vouchers and charter schools, she argued, were a way of offering poor parents the sort of education options that wealthy parents can afford. “We saw the struggles and sacrifices many of these families faced when trying to choose the best educational option for their children,” she said of a visit she and her husband, an heir to the Amway fortune, made to a Christian school in her hometown of Grand Rapids, Michigan. She also credited the visit with having a significant impact on her career as an advocate for school choice: “For me, this was not just an issue of public policy but of national injustice.” (Democrats noted, however, that research has demonstrated that this strategy has done comparatively little to boost achievement among poorer students.)

Many of Donald Trump's supporters live in predominantly rural areas, the committee pointed out, and providing school choice would prove a challenge in low-density areas where there aren't enough "consumers" to create the educational market of charter schools and magnet schools which DeVos envisions. DeVos suggested "distance learning," or online courses, could bridge that gap. (Both DeVos and her husband have owned shares in K12 Inc. The for-profit company runs online charter schools.)

Nor did DeVos answer Sen. Patty Murray (D-Washington) directly when Murray, the ranking Democrat on the committee, asked if she "will not work to privatize public schools or cut a single penny from public education." DeVos backtracked, saying that “not all schools are working for the students that are assigned to them” and that she would work to find "common ground" with parents.

While Republicans lauded DeVos for her work as a school choice advocate, Democrats demanded she release three years of tax returns and more detailed ethical disclosures. Many of DeVos' responses, they said, showed that she would be unprepared for the job.

DeVos also pushed back when Sen. Bernie Sanders (D-Vermont) challenged her to work with him on his plan to make public colleges tuition-free. She said she would commit to "affordability," but stressed, “We have to consider the fact that there’s nothing in life that is truly free. Somebody will pay for it.” By contrast, DeVos told Sen. Elizabeth Warren that the Trump administration expects to overturn "gainful employment" regulations enforced by President Barack Obama which shut down hundreds of for-profit colleges that relied on federal student loans, but whose graduates failed to find steady employment. "We will review that rule," she said.

When Sanders asked DeVos how she would help make childcare more affordable to single mothers earning $40,000 a year, DeVos' inexperience showed: She would not discuss childcare. “I would look forward to working with you,” she said, “to ensure that young mom’s child will have a great opportunity for a great education in our future.” She made no mention of the Trump administration's childcare proposal,

which promises to make childcare tax-deductible (more of a boon for the upper middle class than the working poor) and which offers the working poor a tax rebate up to $1,200, which writer Michelle Goldberg suggests, "is helpful but far too little to meaningfully offset the overall crushing cost of child care."

DeVos also displayed a lack of understanding of a key federal law which protects students with disabilities when Sen. Tim Kaine (D-Virginia) asked her if she believes that all schools that receive federal funding should meet the requirements of the Individuals With Disabilities Education Act (IDEA) which requires public schools to provide disabled children a “free appropriate public education” and governs how schools provide these services.

“I think they already are," DeVos said, adding that IDEA is "a matter best left to the states."

“What about the federal requirement? It’s a federal law, the Individuals With Disabilities Education Act,” Kaine said, before repeating his question.

DeVos began to talk about a Florida voucher program for disabled students that requires students to sign away their IDEA due process rights.

"I think that is certainly worth discussion," DeVos said.

"So you cannot yet agree with me," Kaine said, before moving on to another subject.

Near the end of the hearing, Sen. Maggie Hassan (D-New Hampshire) brought up the issue again, telling DeVos that IDEA is a federal law and that federal laws must be followed. She asked DeVos if she stood by her answer that IDEA is "best left to the states."

"Federal law must be followed where federal dollars are in play," DeVos responded.

“So were you unaware when I just asked you about the IDEA that it was a federal law?” Hassan asked.

"I may have confused it," DeVos said.

DeVos also seemed unfamiliar with the distinction between proficiency and growth when evaluating student performance on standardized tests. No Child Left Behind, for example, was based on proficiency, which required all children to meet specific standardized test scores. Newer federal laws, however, place the onus on growth, meaning that schools are not necessarily penalized for below-average standardized test scores so long as an assessment of the student body shows that individual students are improving over time. “It surprises me you don’t know this issue,” said Sen. Al Franken (D-Minnesota), arguing that DeVos' unsatisfactory answer is reason enough for the Senate to spend more time reviewing her experience and her finances.

When asked if guns have any place in schools, DeVos would only say that this was a matter "left to locales and states" to decide. When pressed, she said she would back Trump's proposal to ban gun-free zones. She also mentioned a Wyoming school she heard about from Sen. Michael Enzi, where she imagines "there is probably a gun in the school to protect from potential grizzlies."