Roger Stone Just Got Smacked Down by the Judge in His Case Over Yet Another Possible Violation of His Gag Order, and We Can't 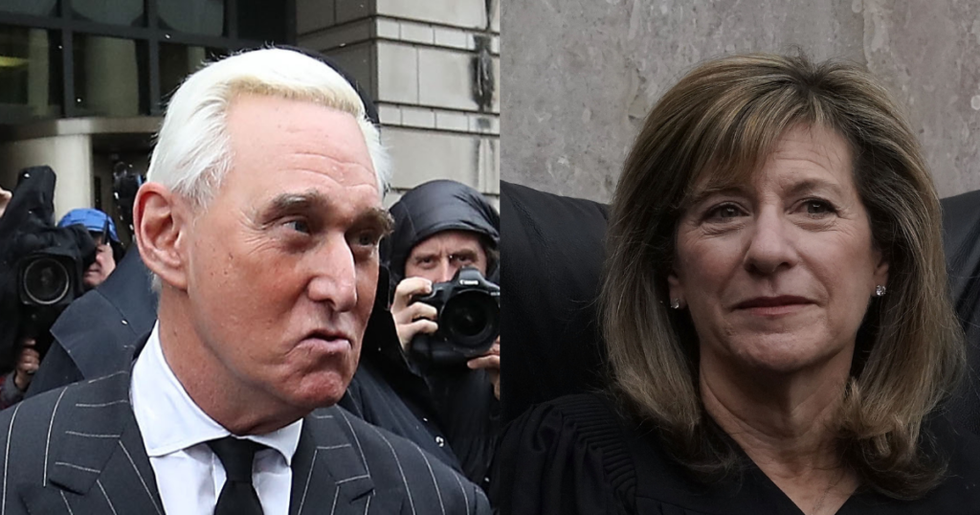 Amy Berman Jackson, the federal judge overseeing the case of President Donald Trump's longtime friend and political adviser Roger Stone, said in court documents that the recent re-release of Stone's book, in which he refers to Special Counsel Robert Mueller as "crooked," defies the gag order on his case.

"It does not matter when the defendant may have first formulated the opinions expressed, or when he first put them into words: he may no longer share his views on these particular subjects with the world," Jackson wrote. "There is no question that the order prohibited and continues to prohibit the defendant from making any public statements, using any medium, concerning the investigation."

Jackson added that Stone has until next week to tell her how he has "come into compliance" with her orders:

"It is further ordered [the] defendant must file a status report on March 11, 2019 detailing his efforts to come into compliance with the Court's rulings."

Additionally, Jackson demands that Stone must submit to the court all records of his interactions with his publisher as well as any public statements he made about the book's release.

Jackson's order deals another blow to Stone, who has pleaded not guilty to charges that he obstructed an official proceeding, made false statements and engaged in witness tampering. This development has led many to suggest that he could be sent to prison soon.

Judge Jackson has Roger Stone and his team boxed in. She is aware that the First Amendment limits her ability to i… https://t.co/WfegpgbnzD
— Renato Mariotti (@Renato Mariotti) 1551814130.0

Reading this order from the judge today, I would not be surprised if Roger Stone ends up in jail soon https://t.co/lwk2Xojcze
— Judd Legum (@Judd Legum) 1551819232.0

On Friday, Jackson ordered Stone’s attorneys to explain by yesterday why they didn’t inform her about the book, The Myth of Russian Collusion: The Inside Story of How Trump Really Won. Jackson has said she would consider sending Stone to jail for continued violations. And she says today that the strictness of the gag order is entirely Stone's fault because he threatened the court in a social media post last month.

Jackson excoriated Stone in February after he posted a picture of her under crosshairs to Instagram.

“Please inform the Court that the photograph and comment today was improper and should not have been posted. I had no intention of disrespecting the Court and humbly apologize to the Court for the transgression,” Stone said in a letter submitted to the court by his attorneys.

The fallout prompted Jackson to call Stone back to court, where she explained why the gag order and conditions of his release “should not be modified or revoked”:

“Defendant is ordered to show cause at a hearing to be held on Thursday, February 21, 2019 at 2:30 P.M. as to why the media contact order entered in this case and/or his conditions of release should not be modified or revoked in light of the posts on his Instagram account.”

Things got even messier for Stone yesterday when he posted a Roger Rabbit-style photo illustration on his Instagram story suggesting he’d been framed. Although Instagram stories disappear after 24 hours, a screenshot soon began to circulate online.

Stone's upcoming trial is expected to last about eight days according to prosecutors with the special counsel's office.