Is This The Beginning of a Trump-Fueled Exodus? 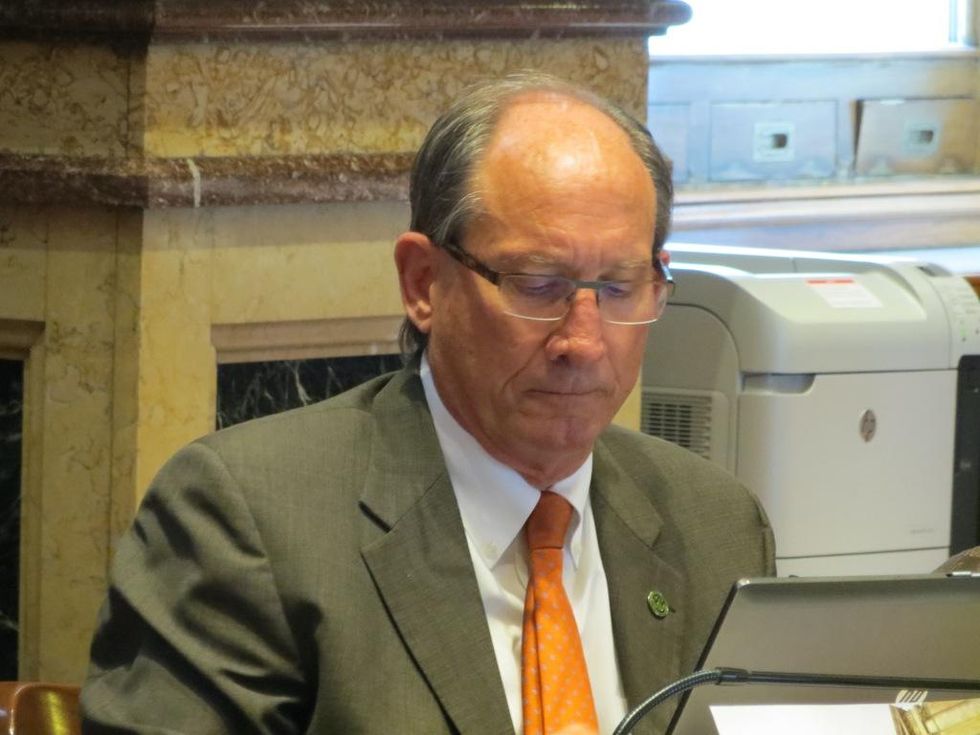 Iowa state Senator David Johnson expressed concerns with the “innate bigotry” of Donald Trump’s supporters and is the first elected official to leave the Republican party over Trump. Johnson announced he will change his registration to No Party after Trump accused Judge Gonzalo Curiel of bias after Curiel, who is of Mexican heritage, released documents related to a case against Trump University. Johnson was adamant that he had never “supported Trump at any point along the way,” and that his “racial remarks and judicial jihad is the last straw.”

Johnson also drew comparisons between Trump’s campaign and the ascendancy of fascism in 1930s Germany. Trump, says Johnson, not only became the presumptive Republican nominee “by reducing his campaign to reality TV and large crowds and divisive language and all the trappings of a good show for those who like that kind of approach,” but emulated the “fascists [who] took control of Germany under the same types of strategies.”

Trump’s proposed ban on Muslims entering the United States did not escape Johnson’s ire either. “I was raised without hearing any racial slur, any racial epithet,” said Johnson, whose father was part of the first American unit to liberate a Nazi prison camp. “It’s something that if we’re going to exclude Muslims from traveling to the United States, who’s next? Are we going to come down on Jews? ... He’s not fit to be president.”

Johnson, who has served 18 years in the Iowa state legislature and supported first Rick Perry and then Carly Fiorina in this year’s Iowa caucuses, criticized his fellow Republicans for allowing the “racial bias of a bigot” to fracture the party further. He also leveled accusations of hypocrisy against House Speaker Paul Ryan. Ryan recently condemned Trump’s attacks against Judge Curiel, referring to them as “the textbook definition of a racist comment.” Nevertheless, Ryan has still encouraged his colleagues to support the presumptive nominee, and reaffirmed his endorsement. “That’s insanity,” Johnson said. “I don’t know how else you put it. I don’t understand what people don’t see happening here.”

“If Mr. Trump is the nominee, he becomes the standard bearer for a party that’s on the verge of breaking apart,” Johnson elaborates. “He simply cannot

unify the GOP. If there is a profound split, I’ll gladly re-join Republicans who are dedicated to equality and justice for all, and let Mr. Trump lead his supporters over the cliff.”

But the former Republican will not support Hillary Clinton anytime soon, if ever, and expressed his frustration with the difficult choices presented to anti-Trump Republicans during this election cycle. “With Mr. Trump and Secretary Clinton, is this really the best the country can do?” Johnson asked. “Is this where we are at, and what does that say about where we are as a people and where we are as a republic, not even 250 years from our founding?”

According to Taylor Mason, a spokesman for the Iowa Republican Party, party officials did not have immediate comments on Johnson’s defection. However, fellow Iowa Senator Brad Zaun, a Trump supporter, expressed surprise over Johnson’s decision. Zaun hopes Johnson “comes to  his senses and decides that the Republican Party is better than the Democratic Party in growing our economy and other issues." But Zaun did admit to harboring prior misgivings over Trump’s ascendancy. "Obviously, there are statements that upset me from time to time, including what Donald Trump said about the judge," Zaun continued. "But I am still supporting Donald Trump because the alternative is Hillary Clinton, and I don't believe it is in the best interests of the state of Iowa and our country to support Hillary Clinton."

Republican Iowa Governor Terry Branstad also came to Trump’s defense, telling reporters Monday that while he believes Trump’s attacks against Judge Curiel were inappropriate, he does not believe Trump is, in fact, a racist. “Most people that know Donald Trump know that he’s not a racist and that he’s had tremendous relationships with minorities, and he has a lot of minorities and women that have been in key positions in his business,” Branstad said.

Despite these pleas, Johnson will not budge. He insists he has a responsibility to show his constituents “leadership and statesmanship.” “There are consequences to the decision to suspend, for now, my Republican registration. I am fully aware of that,” Johnson said. “As I have for the past 18 years, I will put a high priority on constituent service. Many of the voters who elected me are supporting Mr. Trump. I respect that, but disagree that he is qualified to lead the nation and the free world.”