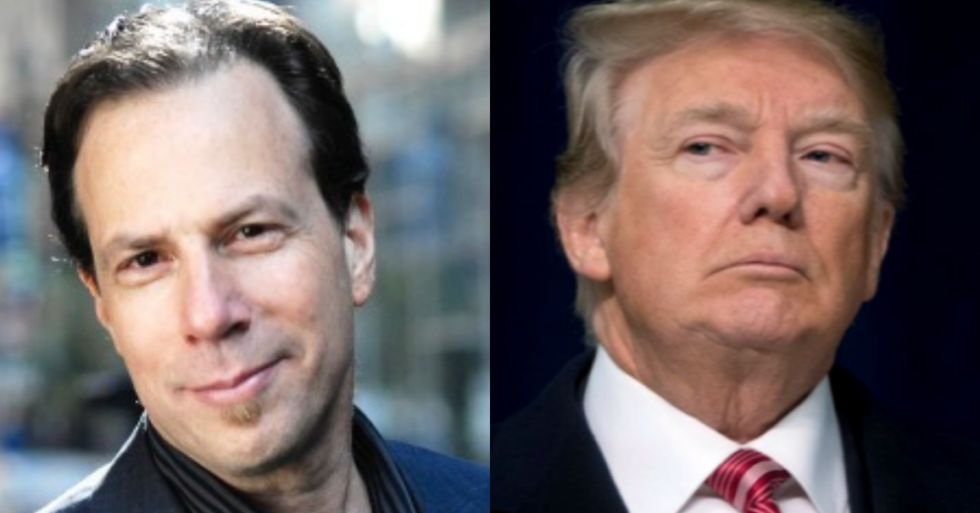 Much speculation has been made in regards to President Donald Trump's temperament, with more than a few people accusing the President of being a narcissist. Now journalist Steven Beschloss is suggesting the United States needs to create safeguards against electing people mentally unfit for the office of President.

On Monday, Beschloss took to Twitter to make his case.

"Can we make one agreement when this nightmare is all said and done? We will require basic mental examinations to ensure we don’t ever elect a malignant narcissist again, a person who has a clinical disorder and is thoroughly unfit to hold power responsibly."

"A great nation should not be at the mercy of a malignant narcissist who [uses] demagoguery to exploit the fears and insecurities of a troubled people. As we know now, the constitution forged centuries ago is not enough to protect us."

Can we make one agreement when this nightmare is all said and done? We will require basic mental examinations to en… https://t.co/FvQyDzUypk
— Steven Beschloss (@Steven Beschloss) 1560782002.0

A great nation should not be at the mercy of a malignant narcissist who sees demagoguery to exploit the fears and i… https://t.co/CwkWYSGMOj
— Steven Beschloss (@Steven Beschloss) 1560783907.0

Considering a President's access to weapons of mass destruction, Amy Springer suggested they must pass the same mental fitness screenings that military personnel do.

@StevenBeschloss At a minimum, POTUS candidates should pass with flying colors the same psychological tests those i… https://t.co/VDRsbLncbH
— Amy Springer (@Amy Springer) 1560785293.0

Others suggested other minimal requirements and reviews that should apply to the President of the United States.

@StevenBeschloss @gtconway3d Maybe a security clearance, too? Like the one I passed when applying for a federal job?
— DL Larsen (@DL Larsen) 1560785198.0

@StevenBeschloss At the very least, s/he must pass an exhaustive security clearance together with complete physical… https://t.co/UNkXPNGXsl
— Vicky Del Rio (@Vicky Del Rio) 1560791639.0

While some felt the bar could be lowered even further and Trump would be excluded.

@eigenvalue2 @StevenBeschloss I think all presidential candidates should exhibit fluency in at least one language.
— Karen Lambert (@Karen Lambert) 1560791432.0

@StevenBeschloss @gtconway3d How about we just agree not to elect unfit leaders?
— Andrew Johnson (@Andrew Johnson) 1560786657.0

But others pointed out that many people already knew President Trump was unfit for office, but did not care. Or saw his unfitness as a benefit to them.

@Ms_Patton_ @mragjr @StevenBeschloss What astounds me are the highly intelligent people I know who were willing to… https://t.co/AobgJM3ZfU
— Two Margarets (@Two Margarets) 1560789227.0

@StevenBeschloss @gtconway3d Who was unaware of his instability long before 2016? This would mean nothing to his b… https://t.co/NMKee1VUwz
— AlternativeFacts (@AlternativeFacts) 1560785514.0

@StevenBeschloss A wonderful idea but one that does not account for the deplorable people of the Republican Party.… https://t.co/0ffFdkwoJO
— BobZ (@BobZ) 1560788986.0

According to clinical references, narcissistic personality disorder is a chronic condition found more commonly in men.

"The cause is unknown but likely involves a combination of genetic and environmental factors."

"Symptoms include an excessive need for admiration, disregard for others' feelings, an inability to handle any criticism and a sense of entitlement."

The book Abused by a Narcissist? Knowing and Becoming the Narcissist’s Worst Nightmare., available here, gives tips on dealing with a narcissist.

After receiving replies to his original message, Beschloss acknowledged the many suggestions and asked people to suggest more.

"Of course, this nightmare period has clarified the need for other requirements beyond norms to ensure we’re never again endangered by a sick criminal: mental and physical exams, tax returns, background checks, essential civics test. What else?"

Of course, this nightmare period has clarified the need for other requirements beyond norms to ensure we’re never a… https://t.co/iuZpdMorAw
— Steven Beschloss (@Steven Beschloss) 1560799477.0

Dr. Justin A. Frank—former clinical professor of psychiatry at the George Washington University Medical Center and a physician with more than forty years of experience in psychoanalysis—wrote Trump on the Couch: Inside the Mind of the President which sought to analyze the President based on his words and actions. Dr. Frank's book is available here.