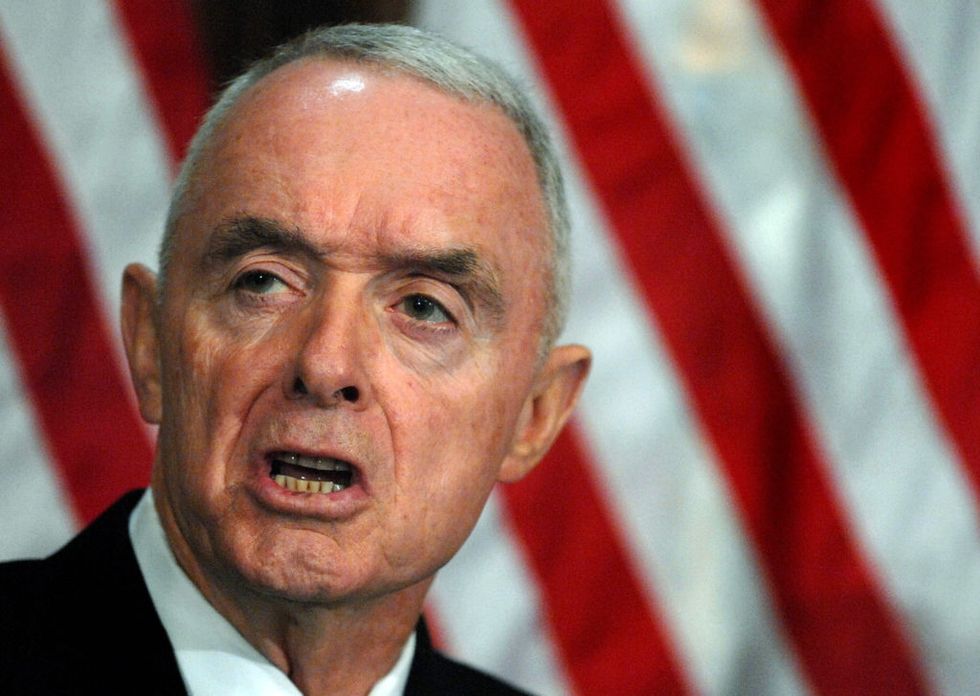 WASHINGTON - NOVEMBER 14: General Barry McCaffrey (R), U.S. Army, speaks during a news conference at the U.S. Capitol November 14, 2007 in Washington, DC. The panel discussed issues relating to the over streching, and retention rates of U.S. forces in Iraq and Afghanistan. The also discussed the costs associated with the resetting of military assets. (Photo by Tom Brown/Getty Images)

Retired four-star General Barry McCaffrey lambasted President Donald Trump in a scathing tweet Thursday evening, hours after Trump gave an angry, unhinged interview on Fox & Friends that left much of the nation, and the panel of hosts, stunned.

McCaffrey said the Fox interview was "very troubling" and called the president "unstable."

Worried about health of Pres Trump. C/S John Kelley needs to get him off-line and get a week rest. Phone call to FOX News very troubling. Has three years left in Office. POTUS has immense legal authority. An unstable Pres is not good for the American people.

This is not the first time McCaffrey has thrown some serious shade at the president. In March, McCaffrey tweeted that Trump is "a serious threat to national security."

Reluctantly I have concluded that President Trump is a serious threat to US national security. He is refusing to protect vital US interests from active Russian attacks. It is apparent that he is for some unknown reason under the sway of Mr Putin.

Reluctantly I have concluded that President Trump is a serious threat to US national security. He is refusing to pr… https://t.co/HBmlM2Tqg2
— Barry R McCaffrey (@Barry R McCaffrey) 1521233180.0

Trump sailed from topic to topic in his bizarre call into Fox & Friends, from explaining why he didn't buy First Lady Melania Trump a birthday present; to threatening to get involved with the Justice Department; to how Michael Cohen represented him in the "crazy Stormy Daniels Deal;" to why presidents should be elected via the popular vote which he lost handily in 2016.

It was his comment about Cohen that prompted the United States Attorney's office in the Southern District of New York to conclude Cohen's confiscated cache of documents may not contain "voluminous privileged documents." Stating that Cohen had only represented him in a few legal matters, Trump threw his long-time fixer under the bus, denying the full breadth of their relationship. Wonder how far Cohen's willingness to "take a bullet" for Trump will go? We may find out, and soon.

Here are some of the most memorable lines from Trump's unplugged Fox & Friends appearance.

I better not get into that because I may get in trouble. Maybe I didn't get her so much. You know, I'm very busy -- to be running out looking for presents, OK? But I got her a beautiful card and some beautiful flowers.

I've taken the position -- and I don't have to take this position and maybe I'll change -- that I will not be involved with the Justice Department. I will wait until this is over.

I'm very disappointed in my Justice Department but because of the fact that it's going under, and I think you'll understand this, I have decided that I won't be involved. I may change my mind at some point because what's going on is a disgrace.

(Michael Cohen) represents me -- like with this crazy Stormy Daniels deal he represented me.

Look, it was very, very nasty with Little Rocket Man and with the buttons -- and, you know, my button's bigger than -- everybody said this guy's going to get us into nuclear war.

I would give myself an A+.

Trump aides fought for months to keep him from doing what he did this morning/the thing that makes him happiest - j… https://t.co/iLjR7X7rvK
— Maggie Haberman (@Maggie Haberman) 1524752935.0