William Barr's Mueller Report Remarks Sure Sounded Like They Were Written by Donald Trump, and Even Fox News Just Called Him Out 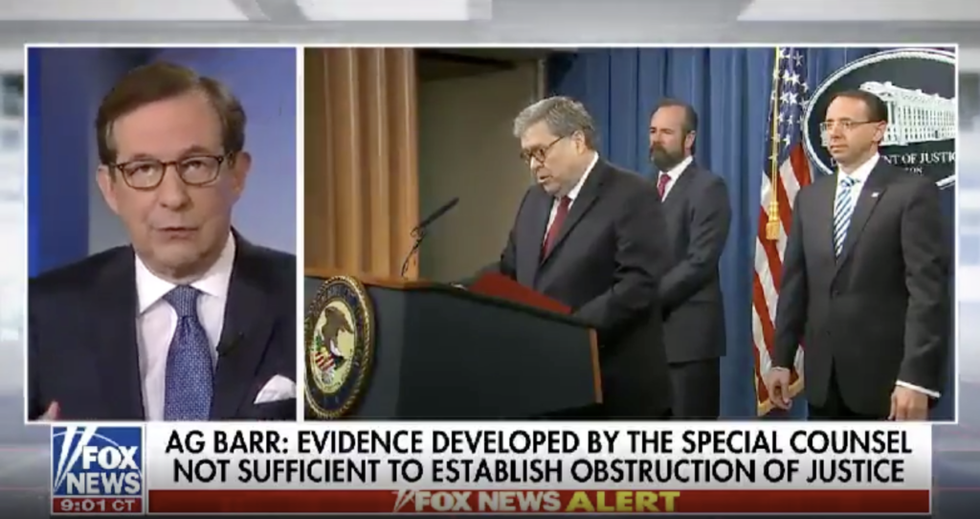 Attorney General William Barr held a hotly-anticipated press conference ahead of the release of the Mueller Report to the public on Thursday morning.

He said that the Special Counsel found no evidence of collusion between the Trump campaign and Russia, then went on to address how he came to the conclusion that Donald Trump did not commit obstruction of justice—a matter on which the report could not reach a conclusion.

According to Barr, the report lists ten incidents of possible obstruction, however Barr said that Trump didn't demonstrate a clear intent to obstruct justice and was, rather, frustrated that Americans were skeptical of his frequent claims that there was "no collusion."

"And as the Special Counsel’s report acknowledges, there is substantial evidence to show that the President was frustrated and angered by a sincere belief that the investigation was undermining his presidency, propelled by his political opponents, and fueled by illegal leaks."

Between the portrayal of Donald Trump as a helpless victim to an overreaching investigation and the frequent refrain of "no collusion," many thought Barr was there to defend Trump, rather than justice itself.

Fox News' Chris Wallace was among those who noticed this.

Here's the video of Chris Wallace on Fox: "The Attorney General seemed almost to be acting as the counselor for the… https://t.co/sf5B65EqOh
— Kyle Griffin (@Kyle Griffin) 1555597861.0

Others felt the same.

Barr made a point of defending the President by describing Trump's pressure & frustration b/c of criticism. It's no… https://t.co/xl8Y3MJY1G
— Maxine Waters (@Maxine Waters) 1555600013.0

That wasn't the only critique.

Last year and before his appointment to the AG position, Barr wrote an unsolicited memo to Deputy AG Rod Rosenstein criticizing that the Special Counsel was looking into obstruction allegations at all.

Since then, many are critical of Barr's prioritization of the President's perception rather than of the truth.

Americans should be outraged by all that has transpired. But they should also feel insulted that these assholes thi… https://t.co/D4FdMiX32a
— Adam Parkhomenko (@Adam Parkhomenko) 1555596296.0

Mueller report on links between Trump campaign and Russians: “the evidence was not sufficient to support criminal c… https://t.co/RZJkmEHwgJ
— John Harwood (@John Harwood) 1555600356.0

Breaking on @MSNBC: NBC's @JuliaEAinsley reports that, according to the report, Robert Mueller did consult the Offi… https://t.co/dnJueYgTi4
— Kyle Griffin (@Kyle Griffin) 1555600332.0