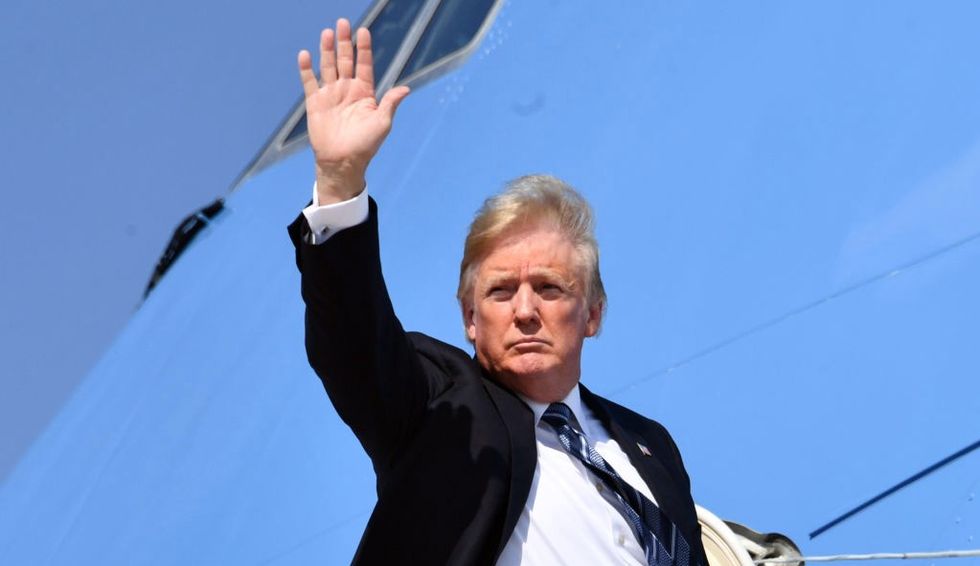 US President Donald Trump waves as he boards Air Force One at Joint Base Andrews, Maryland on September 6, 2018. (Photo by NICHOLAS KAMM/AFP/Getty Images)

In efforts to bolster support and fend off impeachment talk, President Donald Trump recently made some outrageous claims. From threats of violent Democrats to economic collapse if he were to be impeached, the assertions failed to gain much traction.

The President continuously chases but cannot seem to crack a 50 percent approval rating in all but one conservative poll—and then only once in even that poll after his first 60 days in office. So his fear tactics to sway voters going into the 2018 midterm elections in November make a certain degree of sense.

But do the claims themselves contain any truth?

The absurdity of the violent Democrats as a result of Democratic wins in the midterms statement received a rather effective refutation from Bette Midler already. But what about the threat of economic collapse if Trump faced impeachment?

"We doubt that capital markets would collapse if President Trump’s administration was endangered, either electorally or indeed legally."

"The forward momentum of the world economy, and therefore its capital markets, has little to do with the actions of the White House, past, present or future, in our opinion."

And past history backs them up.

Looking at the effects of investigations into former presidents Bill Clinton and Richard Nixon show the state of the economy defined market direction, not a President's legal issues. For Nixon, equity and bond markets responded to the oil crisis and recession before Nixon's impeachment and resignation. During the Clinton impeachment, stocks continued to respond to the dot-com bubble.

"The lesson from all this is that the wider economic context matters most for capital markets."

Barclays pointed out little credit belongs to Trump for the “Trump rally” in the US economy. The present state of the economy owes its success to the period before the 2016 presidential election, when President Barack Obama occupied the White House.

Barclays assessment, while helpful in refuting the President's false claim, came as no great surprise.

Trump made his impeachment prediction in an interview with Fox News on August 23. The President stated:

"I don’t know how you can impeach somebody who’s done a great job."

"I’ll tell you what, if I ever got impeached, I think the market would crash. I think everybody would be very poor. Because without this thinking you would see numbers that you wouldn’t believe, in reverse."

Almost from the moment Trump first claimed his impeachment would cause the stock market to collapse, people expressed their skepticism or their willingness to test his theory.

@CBCAlerts He need to impeach before he kills the economy he’s already ruined their reputation
— Corina Roth (@Corina Roth) 1535050166.0

@CBCAlerts Obviously the market crashing would have a catastrophic effect on the economy, but most of his base have… https://t.co/JmCSjTCQv6
— James Porpaczy (@James Porpaczy) 1535042760.0

@CBCAlerts The stock market is going to crash regardless, mainly due to all the stock buybacks companies did to inf… https://t.co/Z4Q0kaiXmk
— Ryan Amirault 🇨🇦 (@Ryan Amirault 🇨🇦) 1535033570.0

While others just reacted to the claim itself.

@CBCAlerts Trump goes....the world will brighten. World economy will rise, and the environment will have a chance.
— Michael McKinley (@Michael McKinley) 1535049075.0

Another Trump tactic: instill fear. He blackmails the simple minded to believe that only he can keep peace, stabili… https://t.co/ePLRMd3KPV
— Anne Mannone (@Anne Mannone) 1535546239.0