Barack Obama Did Way More In the Closing Days of the Election Than We Originally Thought, and People Are Hopeful 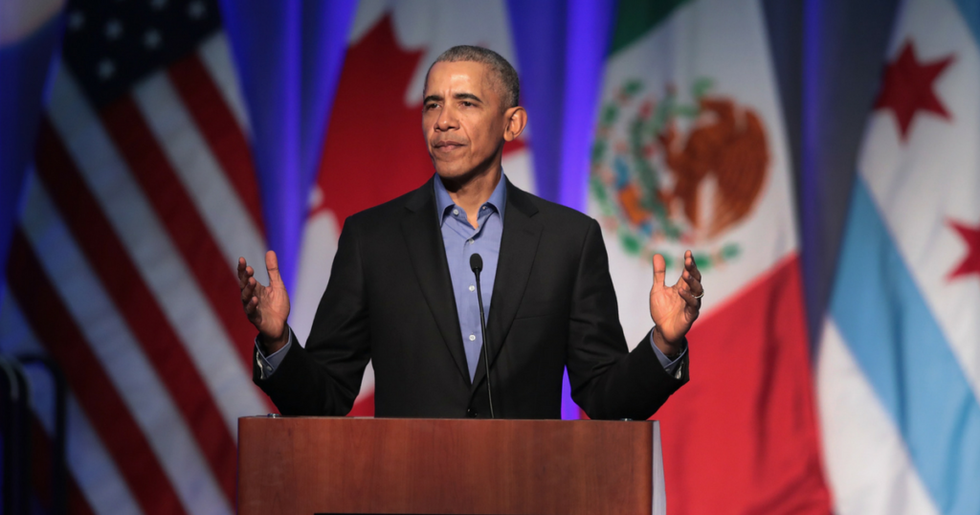 CHICAGO, IL - DECEMBER 05: Former president Barack Obama speaks to a gathering of more than 50 mayors and other guests during the North American Climate Summit on December 5, 2017 in Chicago, Illinois. The summit was held to bring together leaders from the U.S., Canada and Mexico to commit their cities to addressing climate change at the local level. (Photo by Scott Olson/Getty Images)

"I miss Obama" is an oft-repeated sentiment from Americans since President Donald Trump's inauguration in January of 2017.

But no longer occupying the White House hasn't stopped former President Barack Obama from using his influence and experience to help better the United States of America in some of the country's most trying times.

While Obama's public appearances and speeches ahead of the 2018 midterms were well-publicized and lit in many Americans a wistful flame of pre-2016 nostalgia, the 44th President of the United States still wasn't done. As it turns out, Obama accelerated his work for Democratic politicians in the final days before election day, recording over 50 robocalls, radio spots, and digital media, including for Florida governor hopeful Andrew Gillum.

The former president recorded ads intended to play across several African American radio shows in an effort to get out the vote.

The selflessness and focus from the 44th president had people on Twitter cheering.

And, as expected, his actions only made the people miss him more.

I've gotten several robocalls from Obama this week. I just want to scream into the phone, "COME BACK TO ME!"
— Courtney Gifford (@Courtney Gifford) 1541515777.0

For some, it brought a sense of relief.

Shortly after Donald Trump's inauguration, the former-President and First Lady remained out of the political spotlight, focusing on their foundation and relishing their first sense of private citizenship in eight years.

As midterms drew closer, Democrats were worried this pattern would continue. But this September, the former President widely soothed those fears with a biting speech criticizing Donald Trump.

Since then, the president has spoken in communities all over the country, most recently with Georgia governor hopeful Stacey Abrams,, who is neck and neck with Republican opponent Brian Kemp.

Obama's appearances throughout the 2018 midterm campaign helped motivate a weary and anxious Democratic base.

Thank you @BarackObama for you tireless commitment to speak out against hate and rally the people to #VoteBlueToSaveAmerica.
— M.J.M (@M.J.M) 1541443323.0

Barack Obama is only one of many to stump for Democratic candidates. Celebrities like Oprah Winfrey, Will Ferrell, Willie Nelson and others have all made public appearances in an effort to get Americans to vote and to vote Democratic.

In just a few short hours, we'll know whether or not their tireless work paid off.