Barack and Michelle Obama Just Posted Powerful Tributes to Aretha Franklin, and People Are Getting Emotional

We're not crying, you're crying. 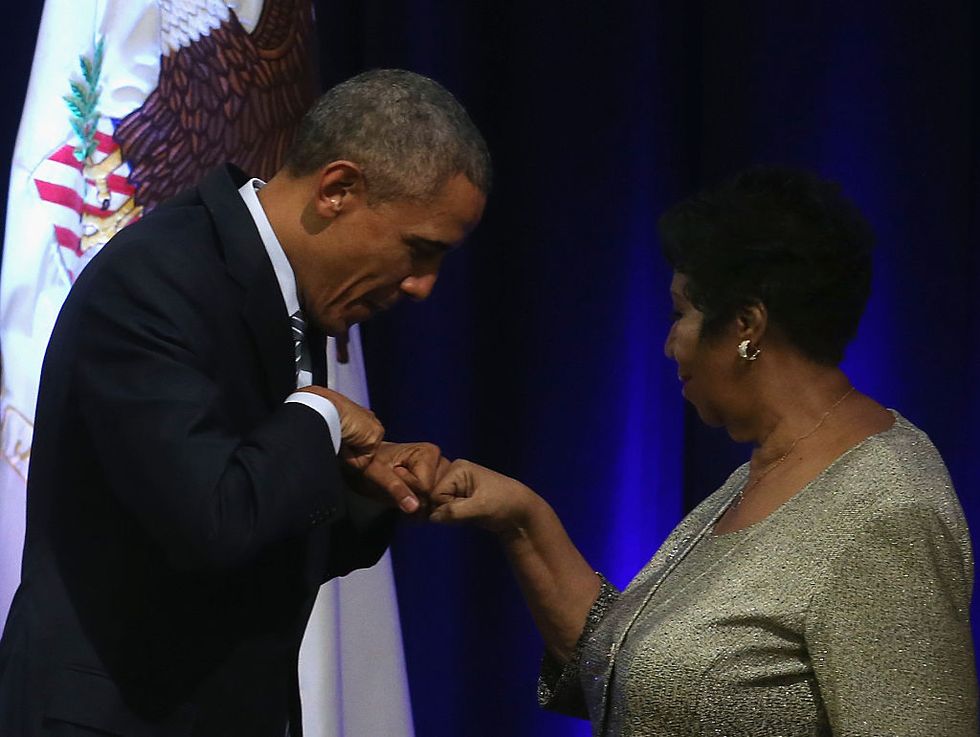 WASHINGTON, DC - FEBRUARY 27: US President Barack Obama fist bumps with singer Aretha Franklin who sung during a farwell ceremony for Attorney General Eric Holder at the Justice Department February 27, 2015 in Washington, DC. The ceremony was held to unveil the Attorney Generals official portrait and commemorate his tenure before his expected departure from the department after more than six years of service. (Photo by Mark Wilson/Getty Images)

Former President Barack and First Lady Michelle Obama tweeted touching tributes to soul legend Aretha Franklin, who passed away on Thursday at the age of 76 after battling pancreatic cancer.

"May the Queen of Soul rest in eternal peace."

"In her voice, we could feel our history, all of it and in every shade—our power and our pain, our darkness and our light, our quest for redemption and our hard-won respect," Obama wrote.

Aretha helped define the American experience. In her voice, we could feel our history, all of it and in every shade… https://t.co/hUcQpbdydq
— Barack Obama (@Barack Obama) 1534437078.0

"America has no royalty," the former president wrote. "But we do have a chance to earn something more enduring."

"She will forever be our Queen of Soul."

The former FLOTUS said listening to Franklin "made time stand still," and that she and her husband "are holding Aretha’s family in our hearts right now."

Watching Aretha Franklin perform at the White House, and on so many other occasions, made time stand still.… https://t.co/dtwEFdLxWI
— Michelle Obama (@Michelle Obama) 1534437889.0

A few hours later following a cabinet meeting, Trump managed to make Frankin's death about him, adding that Franklin had "worked for me on numerous occasions." Yes, really.

Here's the video of Trump saying that Aretha Franklin "worked for me on numerous occasions. She was terrific." Does… https://t.co/qnS5hHPKiO
— Kyle Griffin (@Kyle Griffin) 1534442126.0

Twitter responded to the Obamas' tributes with reverence and grief.

"This tweet is poetry. Both of your voices are missed."

"You are true class."

"And that fabulous hat!"

@MichelleObama @BarackObama Thank you for showing the love we all feel towards Aretha Franklin.
— kdiamond (@kdiamond) 1534437958.0

Mourning the loss today of @ArethaFranklin who shared her spirit and talent with the world. She deserves not only o… https://t.co/a5lZIFYMCL
— Hillary Clinton (@Hillary Clinton) 1534430320.0

Replies to Trump, on the other hand, were far less cordial.

@realDonaldTrump Your words of “condolence” sound like a third grader reading a report in front of the class during Black History Week.
— TekKwenePhD (@TekKwenePhD) 1534440669.0

@SliceOfPiDesign @realDonaldTrump Since when do you write “she is dead” when you try to write a condolence message?… https://t.co/HbNtdkeuJe
— Eddy Sarmiento (@Eddy Sarmiento) 1534441209.0

@realDonaldTrump In other words, you don't really care but felt you had to say something to look like you're keepin… https://t.co/iYRm2Un8AW
— BoatRocker (@BoatRocker) 1534441030.0