We Now Know How Much Extra Profit U.S. Banks Made as a Result of Trump's Tax Plan, and Yeah, It's a Lot 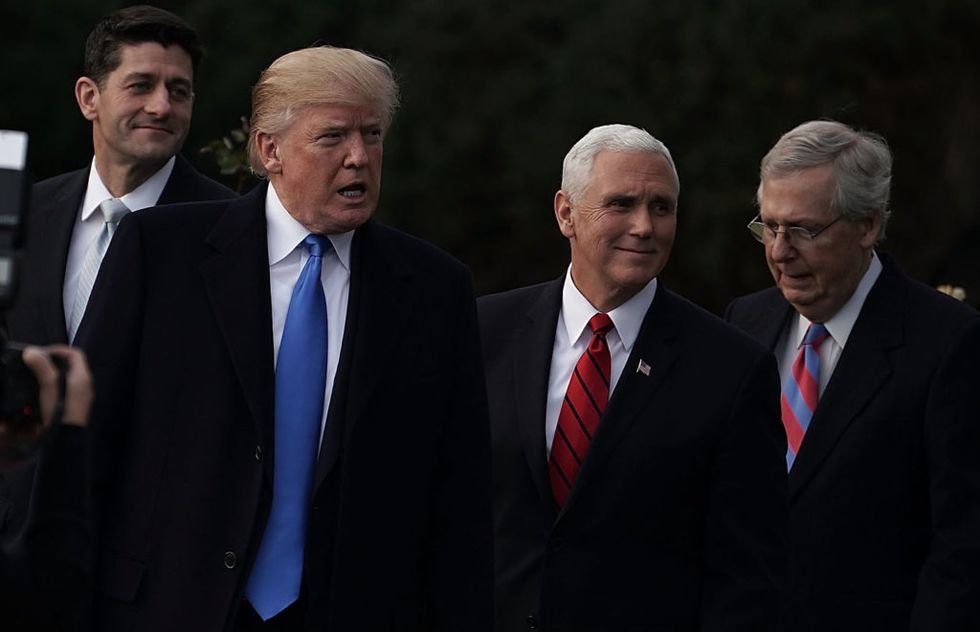 President Trump and GOP leadership head to a celebration of the passage of their tax cuts. (Photo by Alex Wong/Getty Images)

With voters already upset that the Trump and GOP tax plan meant a smaller refund for working and middle class people in the United States, the taxes not being paid by big business is unlikely to make them any happier. The latest revelation about who does and does not benefit from the Republican driven tax changes focused on the banking industry.

Despite the Internal Revenue Service (IRS) under President Donald Trump's Treasury Secretary, Steve Mnuchin, trying to explain away reality, people did not buy it. They're equally unlikely to buy any excuses about the $28 billion banks made in extra profits due to their Trump tax breaks.

The Federal Deposit Insurance Corporation (FDIC) reported 5,406 federally insured banks made $236.7 billion in profits last year. That was an increase of $72.4 billion.

That last amount includes $28.8 billion directly attributable to the new Trump tax breaks for large corporations and individuals with the highest incomes. In other words, that almost $29 billion would have gone to the US Treasury to pay for infrastructure repairs and other government programs before the Trump tax cuts.

The President in partnership with GOP leadership dubbed their legislation the Tax Cuts and Jobs Act.

Thus far there are plenty of tax cut related profits but very few new jobs or pay raises. Even Republicans eventually admitted their tax cuts led to executive bonuses and share buy backs and not any of the jobs or benefits they promised voters.

And voters remembered during the 2018 midterms where Democrats retook the House and Republicans, who had fewer Senate seats up for reelection, barely maintained the status quo.

So what did banks do with all of those profits?

By July almost half of US real estate markets had increases in foreclosure filings.

People expressed their feelings on Twitter regarding the legislation that drew the nickname "GOP Tax Scam."

Many pointed out those bank and corporate profits came on the backs of the working and middle class.

And one taxpayer wanted to know why needed to pay more while huge corporations got money back.

That is a question many taxpayers may have by April 15.