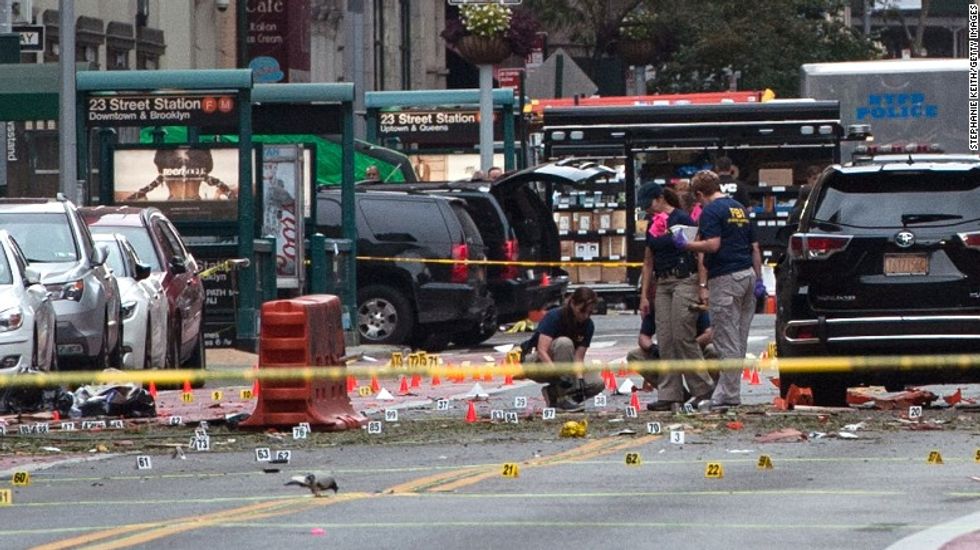 UPDATE AS OF 11:24 AM: Authorities report that Ahmad Khan Rahami is currently in custody after a shootout with police in Linden, New Jersey. More as this story develops.

The FBI has released an image of a suspect in connection with a homemade bomb that injured 29 people in Manhattan’s Chelsea neighborhood Saturday evening. The FBI warned that Ahmad Khan Rahami, 28, is considered “armed and dangerous.” Authorities described him as a U.S. citizen of Afghan descent. Rahami's last known residence was in Elizabeth, New Jersey, where an FBI raid is underway. It is unclear if the raid is related to a suspicious device found in a trash can at a train station that exploded while a bomb squad robot attempted to disarm it. Rahami appears to be on the run. Police are asking the public to call in tips at 1-800-577-TIPS.

Sunday evening, a backpack containing multiple bombs was discovered in a trash can near a train station in Elizabeth, N.J., according to the FBI in Newark:

There was a suspicious package with multiple improvised explosive devices this evening at the Elizabeth Train Station in NJ. #Elizabeth
— FBI Newark (@FBI Newark) 1474271016.0

It contained up to five devices including wires and pipe, but no cell phones or timing devices were discovered. One of the devices exploded when a law enforcement robot attempted to disarm the device, while the remaining devices have been sent for examination.

Officials posit Rahami might have a connection to five others whom authorities detained in a car bound from Staten Island to Brooklyn over the weekend. Authorities are questioning the men but have not yet made any arrests. An official said that all or most of the car’s passengers may have been from the same family and that they may have been on their way to the airport. Earlier, law enforcement noted that surveillance footage yielded a “person of interest”--now suspected to be Rahami--in the bombing near the site of the explosion and another location

four blocks away. Both bombs were made out of pressure cookers, shrapnel, and powerful compounds triggered to explode via a flip phone. It is unclear whether a bomb that went off near the path of a planned charity run in New Jersey earlier on Saturday was directly connected, but the coincidence of the attack has authorities investigating it carefully.

In response, Mayor Bill de Blasio informed New Yorkers that they will see an increased police presence around the city. Tighter security is common as world leaders arrive for the United Nations General Assembly Meeting, which is underway, but de Blasio said that the NYPD’s presence this week will be “bigger than ever.” New York Gov. Andrew Cuomo added that the city will deploy an additional 1,000 police officers and National Guard troops to patrol bus terminals, subway stations, and airports. "I want New Yorkers to be confident when they go back to work on Monday that New York is up and running and we're doing everything that we need to do," he said.

Investigators are weighing several puzzling facts and clues, including that while the bombs seemed constructed to inflict maximum casualties, they were left in relatively low traffic areas. “You’ve got to go somewhere,” said a member of New York law enforcement official who spoke on condition of anonymity. “So the question is: Is the location significant, in terms of motive? And we don’t know that 23rd Street has any particular significance.”

The compounds and construction seem to indicate a higher level of sophistication than ordinarily found in the U.S. “Most of what we see in the United States is a pipe bomb with black powder or smokeless powder or a simple hobby fuse,” said an expert who performs sensitive work for government agencies who spoke to reporters on condition of anonymity. “This would be the high end of sophistication for I.E.D.s in the United States." Authorities are also focusing on whether the bombs were tied to a similar flip phone type homemade bomb found Saturday in NJ by the path of a charity run.