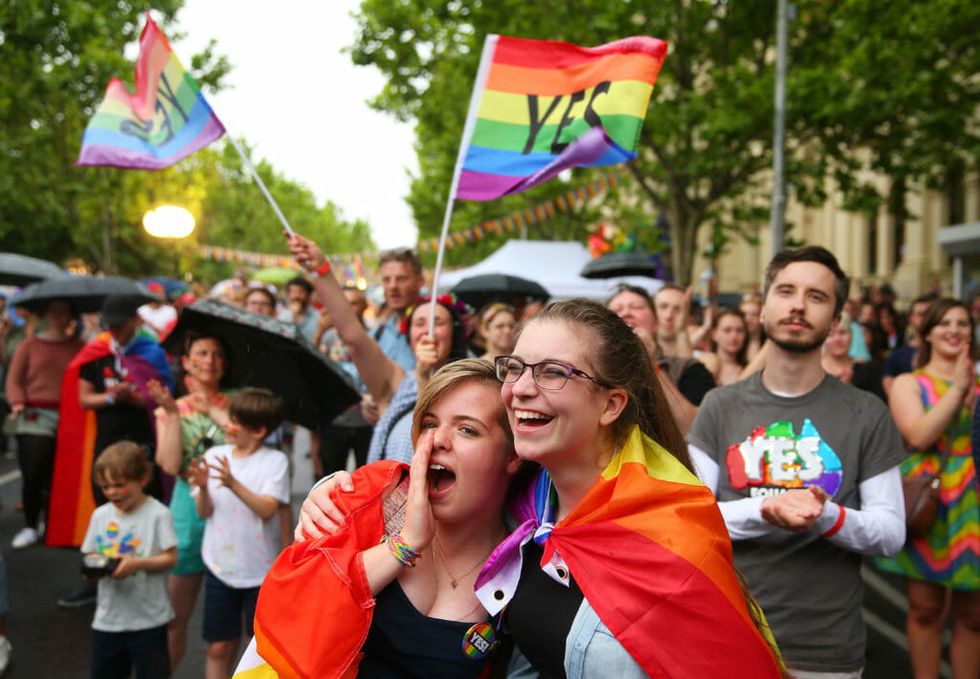 MELBOURNE, AUSTRALIA - NOVEMBER 15: Supporters of the 'Yes' vote for marriage equality celebrate at Melbourne's Result Street Party on November 15, 2017 in Melbourne, Australia. Australians have voted for marriage laws to be changed to allow same-sex marriage, with the Yes vote claiming 61.6% to to 38.4% for No vote. Despite the Yes victory, the outcome of Australian Marriage Law Postal Survey is not binding, and the process to change current laws will move to the Australian Parliament in Canberra. (Photo by Scott Barbour/Getty Images)

Australia's chief statistician David Kalisch said about 7.8 million people voted "yes" for same-sex marriage, with approximately 4.9 million against it. He noted that participation was higher than 70% in 146 of Australia's 150 electorates. "This is outstanding for a voluntary survey and well above other voluntary surveys conducted around the world," Kalisch said. "It shows how important this issue is to many Australians."

Supporters and LGBT rights activists took to the streets in jubilation, waving rainbow flags. Many erupted into song and dance.

“This is our proudest moment as gay and lesbian Australians,” said Chris Lewis, an artist in Sydney who spoke to the New York Times. “Finally I can be proud of my country.”

Annika Lowry, who brought her 4-year old daughter to the celebration, also expressed her joy. “It was not just about us,” she said. “It’s for our kids, so that they know equality is important.”

Politicians and celebrities also weighed in.

This is the moment Australia's first openly gay woman in Parliament heard the country had voted overwhelmingly for… https://t.co/jPh6RqWud0
— James Longman (@James Longman) 1510740825.0

Prime Minister Malcolm Turnbull said Parliament aims to pass legislation by Christmas. "The Australian people have had their say, and they have voted overwhelmingly yes for marriage equality," he said. "They voted overwhelmingly for fairness, for commitment, for love, and now it's our job as the Australian Parliament, all of us here to get on with it and get this done before Christmas."

The people of Australia have spoken and I intend to make their wish the law of the land by Christmas. This is an ov… https://t.co/fEmIpJt7pd
— Malcolm Turnbull (@Malcolm Turnbull) 1510701580.0

Turnbull now faces debate in his government over what the parliamentary legislation should include, and those who voted "No" will likely lobby over the wording of that legislation. According to the BBC, some conservative MPs want the legislation "to contain exemptions that would allow businesses opposed to same-sex marriage to refuse goods and services for weddings."

Almost every poll in the past decade has shown a majority of Australians support same-sex marriage. But the vote was not without controversy.

The postal survey followed two failed attempts by the government to hold a compulsory national vote. Both times the Senate voted it down. Many supporters of same-sex marriage also opposed the survey, and urged Parliament to decide the matter.

The survey was also expensive. Estimated costs were around 122 million Australian dollars, or $97 million. The Australian High Court allowed the vote to proceed after activists argued it was an unconstitutional use of tax money.

“After a cost of 122 million, and over two months of campaigning and years of public discussion, it makes no sense to delay a parliamentary debate,” said Dean Smith, a federal senator from the Liberal Party, who is gay himself. “Australians upheld their end of the bargain by voting en masse. Now it’s time for Parliament to uphold its end of the same deal.”

Smith expressed similar sentiments in the days before the vote.

Christian lobbyist Lyle Shelton, one of the "No" campaign's most outspoken advocates, said he would "accept the democratic decision."

“Millions of Australians will always believe the truth about marriage, that it’s between one man and one woman,” Shelton said. “It could take years, if not decades, to win that back.”

As previously said, congratulations to the Yes Campaign. But I do want to thank all of our No supporters & voluntee… https://t.co/TYRi2jAaA2
— Lyle Shelton (@Lyle Shelton) 1510712595.0