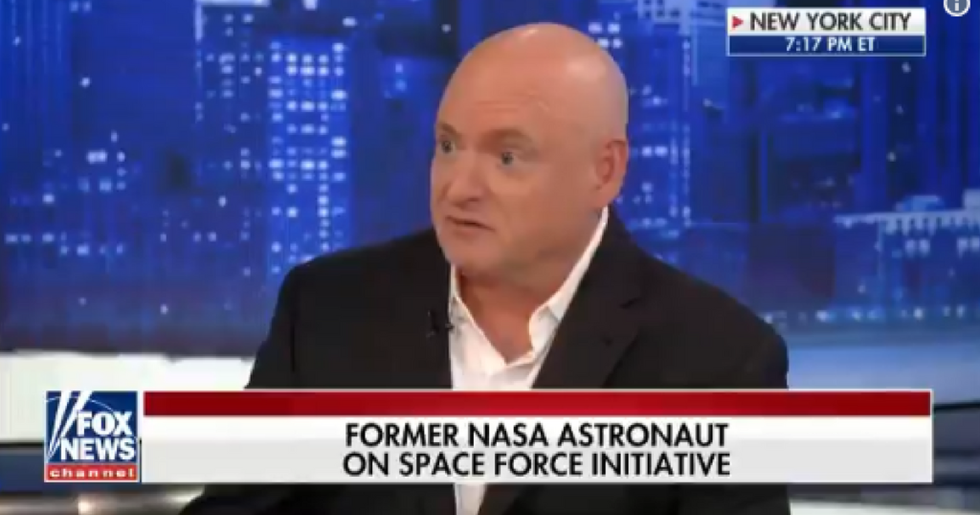 Yesterday, Vice President Mike Pence gave a speech to the Pentagon pushing for the creation of a Space Force, which he touted as a new, "separate but equal" branch of the United States Armed Forces.

The proposal has been met with widespread skepticism and even ridicule, and former NASA astronaut Scott Kelly has been an outspoken opponent of the idea.

On Thursday, Kelly, who commanded the International Space Station, believes a Space Force is unnecessary.

"We currently have a great capability within the U.S. military and @usairforce," he said in an interview with Fox News, "and adding another layer of government bureaucracy to the tune of $8 billion initially is probably not a good use of our taxpayer dollars."

Kelly explained that the Air Force already monitors space, which it has since U.S. Space Command was reintegrated into the branch in 2002.

To me, that tells you pretty much what the reason behind this was, is that it's political.

Twitter chimed in with its thoughts on Trump's Space Force.

This continued the astronaut's remarks from last Friday, when Kelly told MSNBC's Stephanie Ruhle and Ali Velshi said he sees the venture, as both a danger to the peaceful exploration of space and a waste of money.

"It's not clear to me what the purpose is of this new branch of the military, which is going to be incredibly expensive," Kelly said Friday. "And my big concern here is that, you know, space has been a place for us to work in a peaceful manner. And, you know, changing that with not any clear reason at this point is, like I said, kind of hard to understand."

Kelly, a U.S. Navy veteran, added that a Space Force would add needless bureaucracy and create redundancy in work done by other branches of the military.

“Any time you add more bureaucracy to an already large bureaucracy, it's going to cost a lot of money. I think the capability we're talking about is something that probably already exists in the U.S. military, in the Air Force, Navy, other armed services,” he said. "I spent 25 years in the Navy, and 20 of it at NASA. And this is not something that we ever really heard was a serious consideration over all that time."

Kelly suggested that the president should focus on the current cyberwar with Russia, which is ongoing and presents a clear and immediate danger to our national security.

"How about we deal with the war we're currently in? The cyberwar that is, you know, trying to affect our democracy, the thing that's most important to the United States, which is free and fair elections," Kelly said.

"We're currently in a war right now," he added. "We should worry about that one and worry about war in space later."

Kelly, who said in June that it was a "dumb idea" to create a new branch of the military, told MSNBC's Chris Jansing he "still stands by" his "dumb idea comment."

Kelly reiterated his brother's stance that a Space Force would add complicated bureaucracy and would require draining money from other programs, despite the president's pledge of a "budget neutral" project.

Kelly agreed that there are threats out there, but the Armed Forces are not falling short of their current responsibilities.

The Air Force does "a really good job at this."

He added that Trump is the only person who thinks a Space Force is a "fantastic idea."

The only person that I've heard say this is a fantastic idea is the Commander in Chief, the President of the United States. Everybody else says it's redundant, it's wasteful. We don't have the need out there right now.

Ex-NASA astronaut Mark Kelly on the Space Force: "The only person that I've heard say this is a fantastic idea is t… https://t.co/nYnZeigkjo
— Kyle Griffin (@Kyle Griffin) 1533836707.0

Kelly concluded by saying there is a "lack understanding" about space in the White House and that he "hasn't heard of any big fans" of the Space Force.