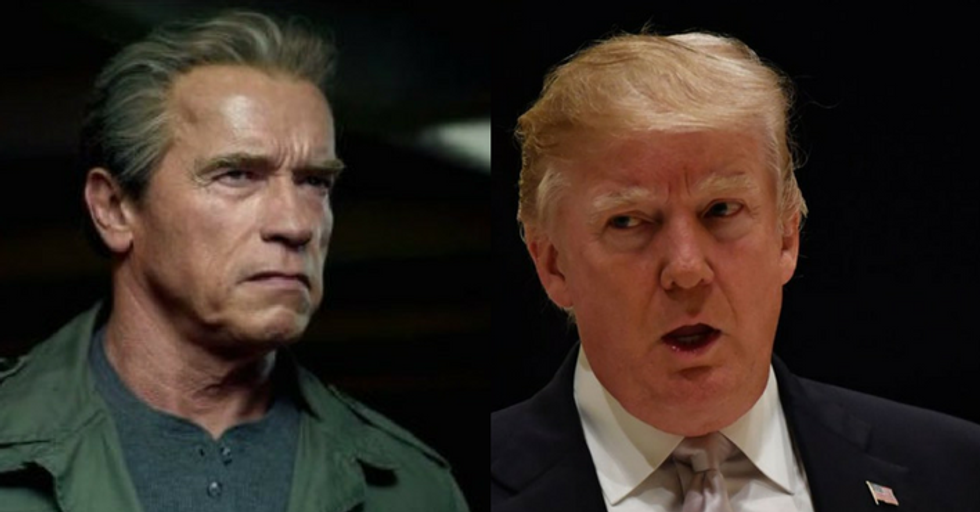 Within days, Interior Secretary Ryan Zinke announced an exemption for Florida because of its "unique" economic dependence on its shores. States also dependent on coastal industries shared their outrage and noted that President Trump's lucrative Mar-a-Lago resort profits from that Florida coastline.

Our fishing, tourism, and recreation industries employ hundreds of thousands of great people. Our coasts are an eco… https://t.co/0jLJ0qFSSh
— Arnold (@Arnold) 1516664632.0

Schwarzenegger never mentions Trump by name, but everyone knows his intended target. This marks another in a long line of criticism leveled by the Republican former governor against the president.

In April, Schwarzenegger criticized Trump's proposed cuts to children's services, specifically after school programs. The former governor accused the president of balancing the budget on the backs children.

"Kids are the most vulnerable citizens. Kids are our future," he said at the time.

In August, Arnold took Donald to task in a video criticizing Trump's response to the violence in Charlottesville, Virginia, and his lack of condemnation of “Neo-Nazis, the White Nationalists and the neo-Confederates”.

Schwarzenegger also blasted Trump's leadership skills, his proposal to cut funding for  Meals on Wheels and his low approval ratings, among other things.

Trump, displeased by Schwarzenegger’s vote for Ohio Governor John Kasich in the primaries even after Kasich dropped out, criticizes Schwarzenegger mainly for his low ratings on “Celebrity Apprentice.”

Yes, Arnold Schwarzenegger did a really bad job as Governor of California and even worse on the Apprentice...but at least he tried hard!
— Donald J. Trump (@Donald J. Trump) 1486121091.0