Ariana Grande Responds to Terror in Every Way Trump Didn't 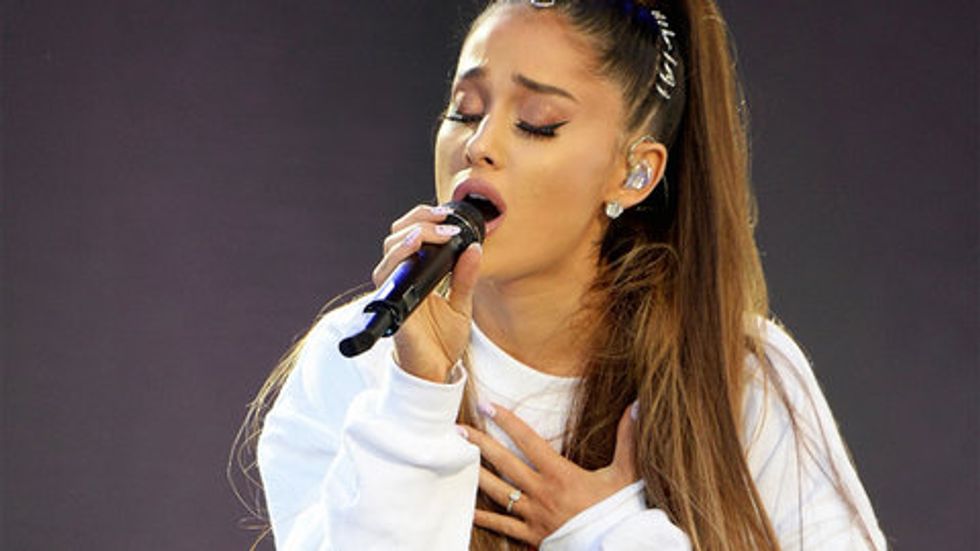 On Sunday, Ariana Grande headlined a star-studded concert, billed as One Love Manchester, at Manchester's Emirates Old Trafford stadium. The concert benefitted the victims and families of those killed and injured in the terrorist attack at the singer's May 22 Manchester show.

Ariana announced the show on Twitter just 4 days after the attack, saying:

We will not quit or operate in fear.

We won't let this divide us.

Our response to this violence must be to come closer together, to help each other, to love more, to sing louder and live more kindly and generously than we did before.

After Saturday's terror attack in London, many wondered whether the show would go on. Ariana's manager, Scooter Braun took to Twitter to announce that not only would the show continue, but that it "will do so with greater purpose."

The Sunday concert was not Ariana's only stop on her return to the city. On Friday she visited family members of those who were killed in the May 22 attack, and visited young victims of the attack in the hospital.

Some commented that Grande's response was beyond her 23 years and presented a stark contrast to President Trump, who spent Sunday morning on Twitter politicizing the attacks in London and excoriating London's Mayor, Sadiq Khan.

Cheers to @ArianaGrande who at a youthful age has demonstrated a level of compassion and maturity exceeding that of the American president.
— Joy Reid (@Joy Reid) 1496603030.0

It isn't every day when Ariana Grande displays more compassion/resolve/inspiration than POTUS, but here we are https://t.co/Uyp7WXjCmW
— Mark Murray (@Mark Murray) 1496666696.0

In addition to Ariana herself, the concert featured performances by Katy Perry, Justin Bieber, Coldplay, Miley Cyrus and Manchester native Liam Gallagher of Oasis, and was attended by more than 50,000 people. Ticketmaster had set aside 14,000 free tickets for those who attended Ariana's earlier Manchester show.

The event raised $2.6 million in just 3 hours for the One Love Manchester fund, bringing the total raised since the Manchester attack to more than $16 million.

You can watch the concert in its entirety here.