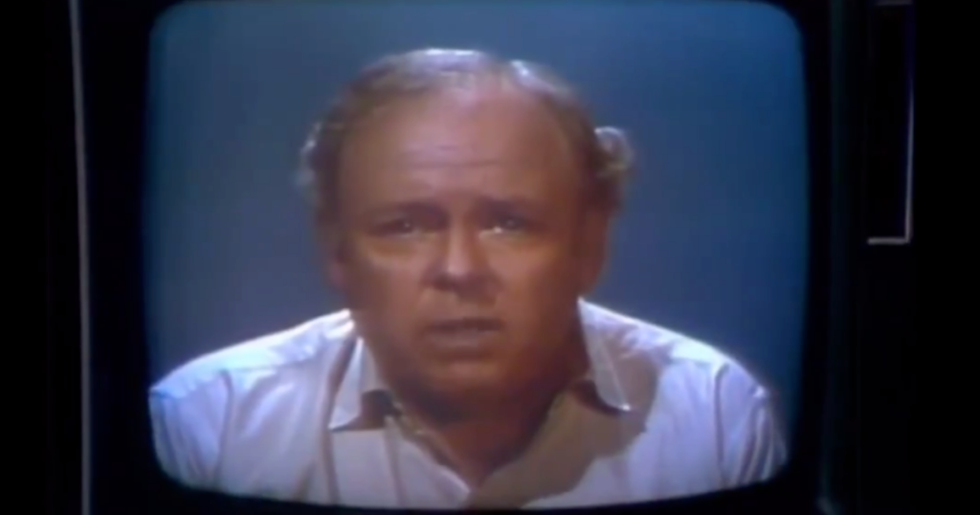 "The only thing that stops a bad guy with a gun is a good guy with a gun," gun rights advocates love to say. Perhaps no policy lives up to this trope as much as what Republicans in Florida are pushing - arming teachers in schools.

But some people have noticed that the foundation of this idea may stem from a peculiar place - a 1972 episode of All in the Family, Norman Lear's legendary satirical sitcom.

Archie Bunker, portrayed by Carroll O'Connor, suggests that airplane hijackings could be prevented if passengers are permitted to carry guns onboard their flights.

Bunker - almost as if channeling President Donald Trump - broadcasts a public service announcement covering the common threads that conservatives love to gin up - that Communist Russia confiscated guns and that a secret cabal of international bankers wants to "domasticate" citizens.

Archie Bunker’s Editorial on Gun Control: “All you gotta do is arm all your passengers”😂 @robreiner @TheNormanLear https://t.co/hZQjNux4cf
— Max Howroute▫️ (@Max Howroute▫️) 1558053781.0

Bunker then turns to the issue of "stickups" and "skyjackings."

"I could end the skyjackings tomorrow," Bunker said.

“All you gotta do is arm all your passengers. If they know the passengers are armed, they know they have no 'supririrority' there. He ain't gonna dare to pull out no rod," Bunker said. "And then your airlines, then they wouldn’t have to search the passengers on the ground no more, they just pass out the pistols at the beginning of the trip, and they pick ‘em up again at the end. Case closed.”

The resemblance to what Florida is trying to do is uncanny.

The parallels between Archie Bunker and Donald Trump run deep.

⁦@realDonaldTrump⁩ is a clueless buffoon. His economics are from the school of Archie Bunker where every country ha… https://t.co/srQ1Q05g8l
— Fabian (@Fabian) 1558104110.0

@BreitbartNews Archie Bunker was like a mirror reflecting the ugliness of #racism #chauvinism and anti #LGBT… https://t.co/wAsLtTuet8
— JRudkus (@JRudkus) 1558091829.0