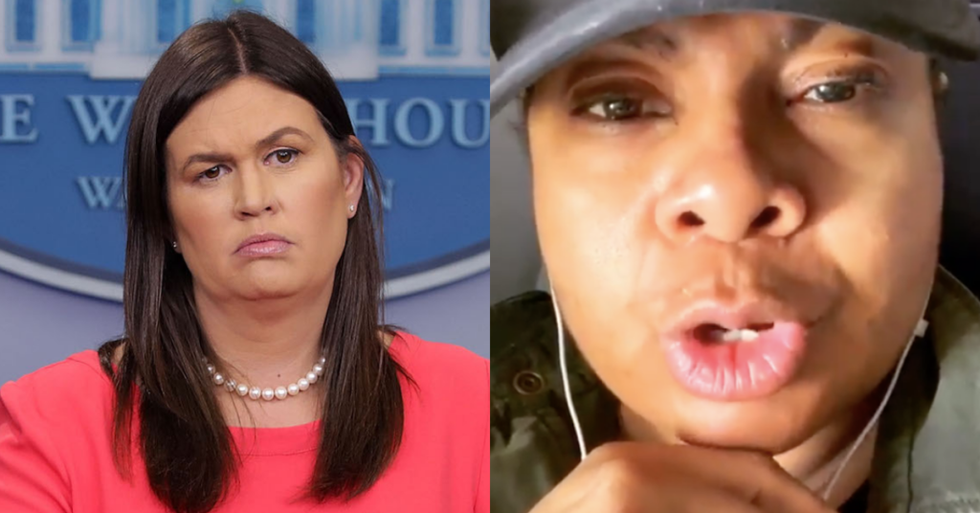 President Donald Trump maintains a contentious relationship with any press organizations that fail to flatter him. He even struck out at Fox News when they deigned to offer even mild criticism.

Referring to the free press as the "enemy of the people," Trump's second official White House Press Secretary, Sarah Huckabee Sanders, followed her boss' lead in her dealings with the press. Once a means of disbursing information, Sanders' White House Press Corps briefings were contentious, then were no more.

Days, then weeks, then months went by between briefings issued by Sanders.

But then on June 13, 2019, President Trump tweeted that Sanders would be officially done at the end of the month after "3 1/2 years." Huckabee Sanders took over the official White House Press Secretary position on July 26, 2017, making her tenure as of her final day only 1 year and 339 days.

While some members of the press decided to bury the hatchet with Sanders and wish her well, CNN's April Ryan was not among them. In a video posted to Instagram, Ryan explained her stance.

"We Deserve Better: It has been 100+ days since we’ve had a White House press briefing. It’s unacceptable and the American people deserve better. Our nation faced potential war and Sarah Sanders didn’t prepare any of us. Shameful! #WhiteHouse #FreedomOfThePress #SarahSanders"

We Deserve Better: It has been 100+ days since we’ve had a White House press briefing. It’s unacceptable and the American people deserve better. Our nation faced potential war and Sarah Sanders didn’t prepare any of us. Shameful! #WhiteHouse #FreedomOfThePress #SarahSanders

Ryan went on to add a video from Newsweek about Sanders tenure.

She captioned this one:

It was not long before Ryan's criticism of Sanders spread to other platforms outside of Instagram.

@Newsweek @AprilDRyan I demand a list of all the "journalists" who attend this party for liar-for-hire Sarah Sander… https://t.co/gSecqMHYuw
— Mrs. Betty Bowers (@Mrs. Betty Bowers) 1561138010.0

@Newsweek @AprilDRyan Why would anyone in their right mind attend something like that?
— Tom Campbell (@Tom Campbell) 1561137852.0

Many stated not attending showed integrity.

There is clearly no love lost.

CNN’s April Ryan on Sarah Sanders leaving the White House: “She suffers from lie-abetes and her tenure has been fra… https://t.co/JtA1Ekt6L9
— Ryan Saavedra (@Ryan Saavedra) 1560481294.0

The relationship between Trump, Sarah Huckabee Sanders and the CNN members of the White House Press Corps has been particularly volatile.

Gosh, I can’t wait for Sarah Sanders to lie her way through dismissing a question about this before insulting Jim A… https://t.co/obXwYsyO9E
— Greg Greene (@Greg Greene) 1556282978.0

CNN correspondent Jim Acosta had his credentials stripped then restored by court order after Sander's shared a fake video from an InfoWars affiliated website of Acosta's interaction with a White House page when the page attempted to yank a microphone out of his hands.

Trump has referred to Ryan with derogatory terms and attempted to silence her. Attacking CNN is a focal point in most MAGA rallies.

For more behind the scenes information on the press and the Trump administration, April Ryan's book Under Fire: Reporting from the Front Lines of the Trump White House, is available here.

"In Under Fire, Ryan takes us inside the confusion and chaos of the Trump White House to understand how she and other reporters adjusted to the new normal. She takes us inside the policy debates, the revolving door of personnel appointments, and what it is like when she, as a reporter asking difficult questions, finds herself in the spotlight, becoming part of the story."