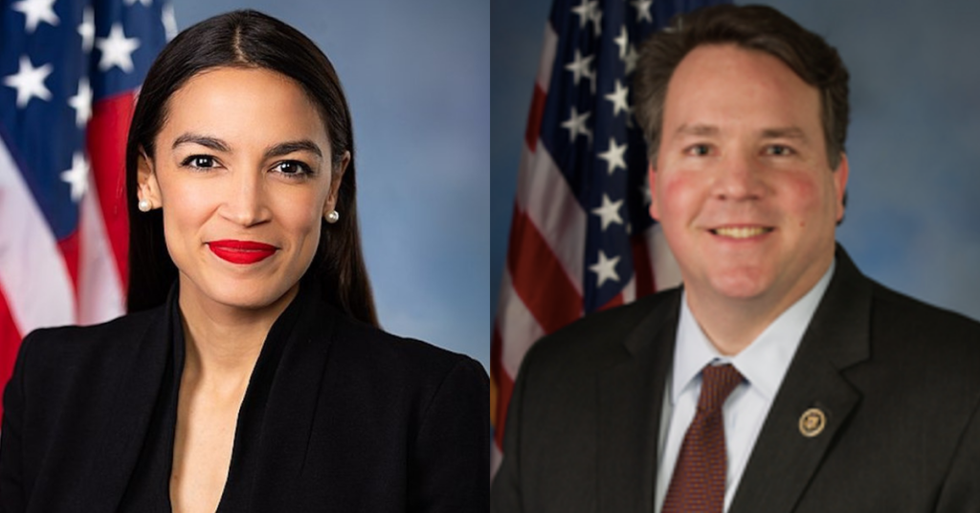 The most fervent Trump supporters among the GOP in Congress—referred to as the MAGA minions after trying to strong-arm their way into a Sensitive Compartmented Information Facility (SCIF) with cell phones raised in violation of federal law—continue to try to garner public support for allowing President Donald Trump and his legal team to see documentation from all impeachment inquiry depositions.

AOC posted, regarding the stunt many report the President knew about in advance and may have even orchestrated, on Twitter:

"What’s worse: since many of the flash mob already sat on the committees, they *knew* how serious a breach it was to bring devices into SCIF & did it anyways."

"Our country is a game to them. Remember that the next time they use “natl security” as an excuse for their bad ideas."

"Hey [Rep. Ocasio-Cortez] I thought you supported Open and Transparent government. Truth is for AOC the ends justify the means and she gladly reverts to Soviet style secret hearings in the Capitol basement. Socialism and one-sided Kangaroo Courts have no place in the #USA #ExposeSchiffSCIF."

But AOC fired back.

"Rep. Mooney, you & I both know that when a massive crime is committed, the 1st step is to separate witnesses & get their stories to see what adds up."

"You know that making these depositions public will help potential criminals line up their testimony."

Other people had a few bits of wisdom for Mooney and his fellow MAGA minions.

The Republican controlled House and Senate created the rules the impeachment inquiry is following.

@RepAlexMooney @AOC Andrew Napolitano: "As frustrating as it may be to have these hearings going on behind closed d… https://t.co/FlLErliTTh
— Ted Hogbin (@Ted Hogbin) 1571933419.0

And 13 of the GOP MAGA minions have full access to the hearings along with over 30 more of their Republican colleagues.

The exact number of Republicans sitting on the three committees—Oversight, Foreign Affairs and Intelligence—has been reported as 42, 47 and 48 as some GOP members sit on more than one participating committee.

Things did not add up for many on Twitter.

What are Mooney and his fellow minions complaining about?

People noted this was a familiar ploy from the GOP playbook during the Obama administration.

@DavMicRot @nicole_bertrand I agree. Republikans no longer have answers to issues that concern anyone but the weal… https://t.co/BdYlKgZzTx
— Frank (@Frank) 1571943035.0

People called Mooney out on his obfuscations...

@RepAlexMooney @AOC Alex, you are not being truthful and bringing dishonor to your office.
— Matthew Dowd (@Matthew Dowd) 1571942661.0

...and took the opportunity to introduce people to Cathy Kunkel, the woman hoping to unseat Mooney in 2020.

The impeachment inquiry is ongoing. What will happen to the Republicans who decided to violate the law to disrupt a process their party created remains to be seen.

The book Impeachment: A Citizen's Guide is available here.