Ivanka Was Not Having Angela Merkel's Swipe at Trump Over His Trade Policy During a Speech in Munich, But the Rest of the Audience Loved It 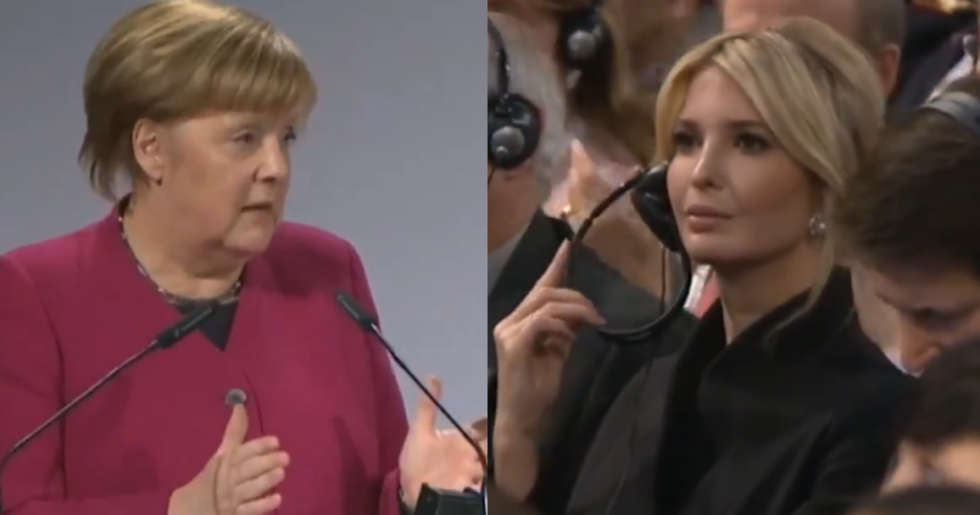 German Chancellor Angela Merkel ripped President Donald Trump's threats of slapping tariffs on German cars at the Munich Security Conference last weekend and Ivanka Trump did not take too kindly to her remarks.

Merkel shared her frustration over Trump's hostility toward American trading partners such as Germany, which invested in the world's largest BMW plant in Spartanburg, South Carolina.

The Trump administration "says German cars are a threat to America's national security," Merkel said. "We are proud of our automotive industry, and I think we can be."

"Our cars... are built in the United States of America. South Carolina is the largest BMW plant," the chancellor continued.

"South Carolina is supplying China, and those cars aren't less of a threat because they're built in South Carolina as opposed to Bavaria. So [if] they are supposed to be a threat to the national security of America, it’s a bit of a shock to us.”

While most people in attendance laughed or applauded, including those surrounding Ivanka Trump in the audience, Trump just sat still, staring straight ahead, refusing to clap as she listened to the translation of Merkel's speech.

Ivanka Trump is the only person in audience who doesn’t applaud after Angela Merkel points out the absurdity of Tru… https://t.co/8Cspkai0eT
— Aaron Rupar (@Aaron Rupar) 1550343351.0

People are wondering just what Ms. Trump was doing in Munich in the first place.

But some had an alternate theory for her reaction.

@atrupar She can’t even bother to put the headphones on, she isn’t actually paying attention to what was being said
— Tammy (@Tammy) 1550432626.0

Pretty awkward being the only person in the room refusing to clap for the economic boon BMW's South Carolina operation brings to the United States.

@atrupar America banning its own car manufacturing industry because the cars have a German brand...
— 💧Fringe Dweller (@💧Fringe Dweller) 1550435238.0

The Spartanburg facility employs 9,000 South Carolinians and produced 1/3 of the BMWs sold in the United States as of 2017. Seventy percent of the vehicles assembled in Spartanburg are exported. Trump's potential tariffs - and the possible retaliatory measures they may spurn - could hamper sales and cost jobs.

We have been seeing this play out with American farmers, who are going bankrupt at record rates thanks to retaliatory tariffs on goods such as soybeans, corn, and dairy.