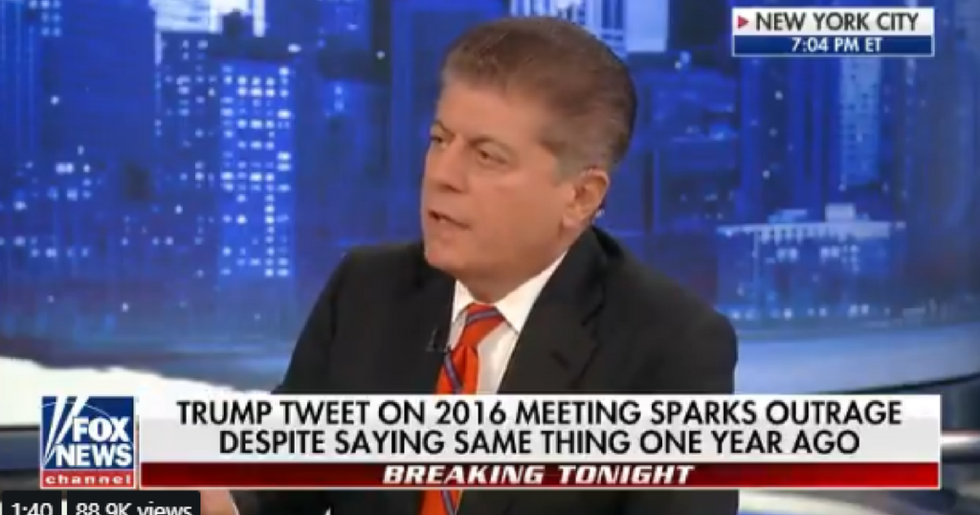 Fake News reporting, a complete fabrication, that I am concerned about the meeting my wonderful son, Donald, had in… https://t.co/sTbiVC2g4a
— Donald J. Trump (@Donald J. Trump) 1533472543.0

To Trump, "It went nowhere" is dispositive -- if no information changed hands, he would argue, therefore there was no crime.

Not so says Napolitano:

"If the people in Trump Tower agreed to receive dirt on Hillary from Russian persons, entities or the Russian government, it doesn't matter if they never received it because the agreement is what is the crime & I suggest to you that is what Bob Mueller is looking at."

Napolitano went on that there is "no such legal concept as collusion" because the word "collusion" doesn't appear in "any federal statutes relevant to" the investigation into the Trump campaign's connection to Russia.

Napolitano said that a defense such as "collusion is not a crime and therefore nobody involved in the Trump Tower meeting committed a crime" are a "false premise," because federal law "prohibits the receipt by people running a campaign of information or anything of value from a foreign person, entity, or government."

On Monday, Trump implied that collusion with Russia is a crime but only if Clinton did it - collusion which the president tweeted, without evidence, "was very real" between the Clinton campaign and the Russian government.

"Collusion is very real with Russia, but only with Hillary and the Democrats, and we should demand a full investigation," Trump wrote unironically.

The agreement is called a conspiracy.

If the people in Trump Tower agreed to receive dirt on Hillary from Russian persons, entities or the Russian government, it doesn't matter if they never received it because the agreement is what is the crime & I suggest to you that is what Bob Mueller is looking at.

On Tuesday, Napolitano appeared on Fox & Friends and said the intent of the Trump Tower meeting is "up to Bob Mueller to investigate," though he said he believed Trump didn't know about the meeting.

Trump's eldest son, Donald Jr., however, agreed to the June 2016 meeting after being told it was to get Russian dirt on Clinton. "If it's what you say, I love it, especially in the summer," Junior wrote in an email at the time.

This intent, Napolitano argued, constitutes the crime of conspiracy, despite the campaign having walked away empty-handed.

Some on Twitter were surprised to see Fox News turning on Trump.

Others wondered why Napolitano believes that Trump didn't know about the meeting, which took place a few floors beneath his own apartment and was attended by his son, son-in-law, and campaign manager.

If Trump did, in fact, know about the meeting, Junior could face perjury charges for lying to the Senate. ABC News chief legal analyst Dan Abrams said on Monday said Trump's Sunday tweet about his "wonderful son" could spell legal trouble for Junior.

Junior told the Senate Intelligence Committee in May that he did not tell his father about the meeting or what was promised before the meeting. Junior also initially said the meeting was about "adoptions," which legal experts say is code for sanctions relief. Either way, things may be looking bleak, legally speaking, for Junior.

Abrams added that a possible indictment of Junior is Trump's "number one concern."

We can talk about all these questions of campaign finance law and possible defrauding of the United States. The number one concern of his right now has to be that statement to Congress from Don Jr. that Donald Trump didn’t know about the meeting.