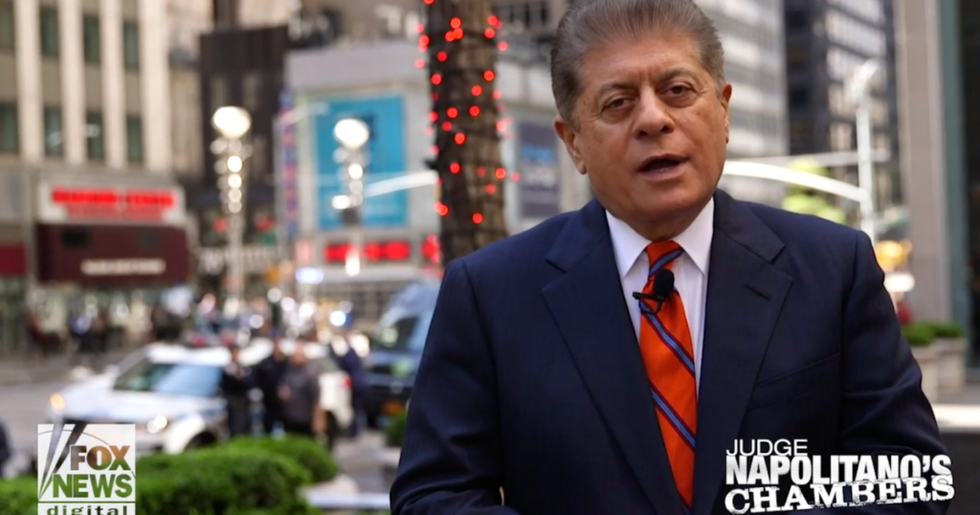 President Donald Trump may believe that Special Counsel Robert Mueller's report determined there was "no collusion" and "no obstruction," but now even Fox News is breaking with him on the latter.

On Wednesday, Andrew Napolitano, a former judge and Fox News legal analyst, opined that Mueller came to the conclusion that Trump "probably committed the crime of obstruction of justice but probably should not be charged for them... that's a real head scratcher, is the president above the law?"

"The statute making obstruction criminal prohibits interfering or attempting to interfere with a criminal prosecution or investigation that the government is conducting... so when Bob Mueller said the president of the United States did about a dozen things to slow down, impede, negate, or interfere with the investigation of his campaign, or of his former National Security Advisor General Michael Flynn, that's a serious allegation of criminal activity."

Whether the obstruction was completed, the judge explained, does not matter, as even attempting to thwart an investigation "for a corrupt or self-serving purpose" counts as obstruction of justice.

If Trump is losing Fox News, he could be in real trouble. Napolitano made it crystal clear that Trump committed crimes.

@Judgenap Thank you for your honesty and your efforts to educate the public about the reality of Trump’s and Barr’s… https://t.co/pyIAtkoXKl
— NYEMSMom (@NYEMSMom) 1556200615.0

@Judgenap Wishing the Judge a speedy recovery of the terrible injuries he caused to himself by contorting the truth in his video.
— Bud Day (@Bud Day) 1556196449.0

Trump fans were not happy with Napolitano's analysis.

And of course, all of this is Hillary Clinton's fault.

@Judgenap Haven’t seen you do a in your chambers video on Hillary and the emails. Destroying phones with hammers e… https://t.co/9NwSKPxQeg
— Jeff Nichols (@Jeff Nichols) 1556135965.0

Nevertheless, in a followup op-ed, Napolitano touched on the instances of obstruction as outlined by Mueller in his report.

"Mueller laid out at least a half-dozen crimes of obstruction committed by Trump," Napolitano wrote, "from asking former Deputy National Security Adviser K.T. McFarland to write an untruthful letter about the reason for Flynn's chat with Kislyak, to asking Corey Lewandowski and then-former White House Counse lDon McGahn to fire Mueller and McGahn to lie about it, to firing Comey to impede the FBI's investigations, to dangling a pardon in front of Michael Cohen to stay silent, to ordering his aides to hide and delete records."

Napolitano said that Trump was not charged because Attorney General William Barr "would have blocked such a charge," even though that view is at odds with the criminal statute and standard legal practice. Barr, Napolitano said, "only believes obstruction can occur if you're interfering with a criminal investigation of yourself."

"On obstruction, Barr is wrong," Napolitano wrote. "The president's job is to enforce federal law. If he had ordered its violation to save innocent life or preserve human freedom, he would have a moral defense. But ordering obstruction to save himself from the consequences of his own behavior is unlawful, defenseless and condemnable."

Instead of recommending charges, Napolitano noted, Mueller tasked Congress with determining whether Trump should be held accountable for his actions through the process of impeachment.