Fox News Legal Analyst Just Made a Surprisingly Blunt Assessment of What the Michael Cohen Sentencing Means for Donald Trump, and Get Out the Popcorn 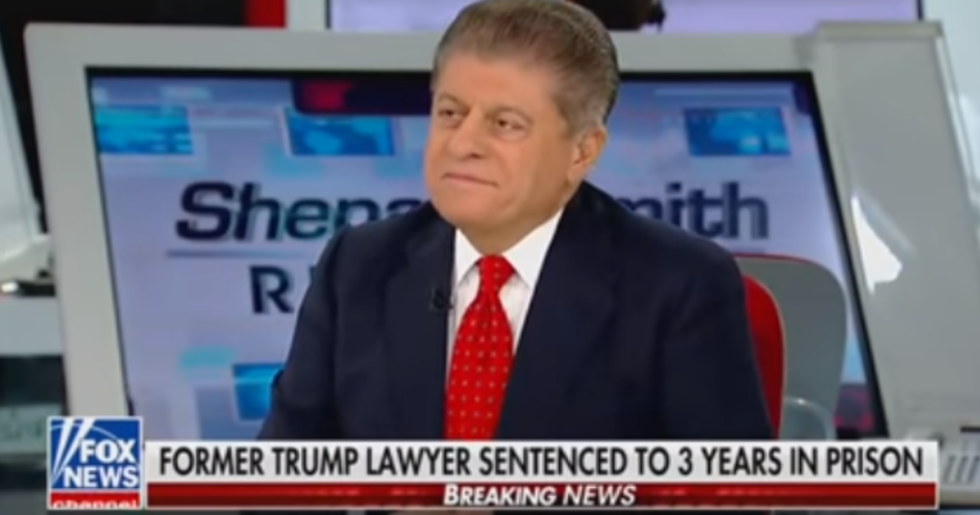 The proof, Napolitano explained to Shepard Smith, was revealed during the sentencing hearing of Trump's former lawyer and fixer Michael Cohen, who received a three-year prison term for his role in subverting campaign finance laws at Trump's behest during the 2016 election.

Those charges were unrelated to Special Counsel Robert Mueller's investigation into Trump-Russia collusion and obstruction of justice.

A plea agreement between the Southern District of New York and AMI, which owns the National Enquirer and quashed stories about Trump's affairs with Stormy Daniels and Karen McDougal, “ties a bow on all of this,” Napolitano said.

AMI admitted Wednesday to paying McDougal, a Playboy playmate, $150,000 "in concert with" the Trump campaign "in order to ensure that the woman did not publicize damaging allegations about the candidate before the 2016 presidential election."

The AMI deal "connects the dots between the payments to the two women who claim they had intimate relationships with the president," Napolitano said, "and the line running through all of that is the president himself.”

Smith then asked: “Prosecutors have told us through these filings that they have evidence that the president committed a felony?”

Napolitano replied: “The felony is paying Michael Cohen to commit a felony. It’s pretty basic. You pay someone to commit a crime, they commit the crime. You are liable, criminally liable for the commission of that crime. That’s what the prosecutors told the federal judge.”

Things are not looking good for Trump, especially when Fox News is throwing in the towel.

@Kathmandu513 @thedailybeast As long as it’s during the day, he’s fine. Trumpies only watch Hannity, Ingraham, Carlson and Fox and Friends.
— AngryVet (@AngryVet) 1544655511.0

@thedailybeast is there hope for fox that just maybe some of the personalities have some credibility---
— Edward Houghton (@Edward Houghton) 1544664912.0

Trump, having lied about the payments previously, saddled Cohen with blame and insisted the hush money agreements were not campaign finance violations.

"Those charges were just agreed to by him in order to embarrass the president and get a much reduced prison sentence," Trump complained, "which he did—including the fact that his family was temporarily let off the hook. As a lawyer, Michael has great liability to me!"

@realDonaldTrump This might seem a bit off topic but do you think you'll you be tried in court as an adult or a juvenile?
— Julie Silver (@Julie Silver) 1544713115.0

@realDonaldTrump So he wa probably not guilty but pleaded guilty to get a much reduced prison sentence. Mmm-kay!?!
— Erin Smyser (@Erin Smyser) 1544712972.0

The house of cards is crumbling.

@realDonaldTrump The president should be embarrassed! You are a co-conspirator in breaking campaign finance law and… https://t.co/0hR47780t8
— Clarebro (@Clarebro) 1544712981.0