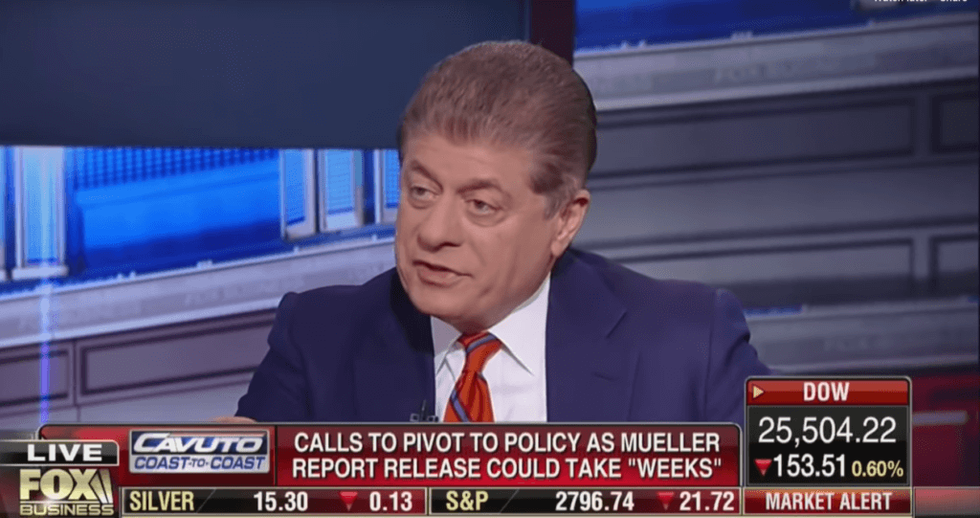 The full report has yet to be released to the public since its conclusion on Friday evening. Calls from Democratic lawmakers to inform Americans of its contents have been blocked by prominent Republicans.

Though Republicans are (perhaps prematurely) taking a victory lap regarding charges of collusion, neither the report, nor AG Barr's summary exonerated the President of obstruction of justice, despite claims from the White House of the opposite.

With the public hungry for the report's release, Fox News legal analyst Judge Andrew Napolitano is warning the President to be wary of the report's contents.

“In the 700-page summary of the two million pages of raw evidence [the length of the report has not been released, so it's unclear how Napolitano arrived at these numbers], there is undoubtedly some evidence of a conspiracy and some evidence of obstruction of justice, just not enough evidence," Napolitano said in his appearance on Fox Business.

"If there were no evidence of a conspiracy, the AG would've told us so, but he didn't...Whatever that evidence is of obstruction is what the President's adversaries will have a field day with...for two years, for the duration of his first term."

As Napolitano pointed out, Barr did not say in his summary that there was no evidence of collusion, likely meaning that the report comes just shy of proving it beyond a reasonable doubt.

Others have arrived at this conclusion as well.

@AaronBlake There was collusion, but there wasn’t proof beyond a reasonable doubt of conspiracy or coordination wit… https://t.co/Gw00AzNvZC
— NorNor (@NorNor) 1553719360.0

Many are curious as to how Napolitano arrived at the alleged 700 page length of the report.

Did Napolitano just break some news? Or is this a Fox pundit spreading misinformation?

We won't know until the report is finally released to the public.